I have gotten started on a webcomic. I’m using Blender to make reference models for the Painter X paintings, so I guess this question can belong in these forums.

So…the stuff I have in mind regards (possibly) selling my stuff, and other things. 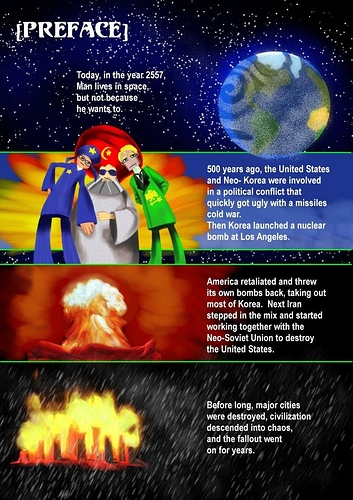 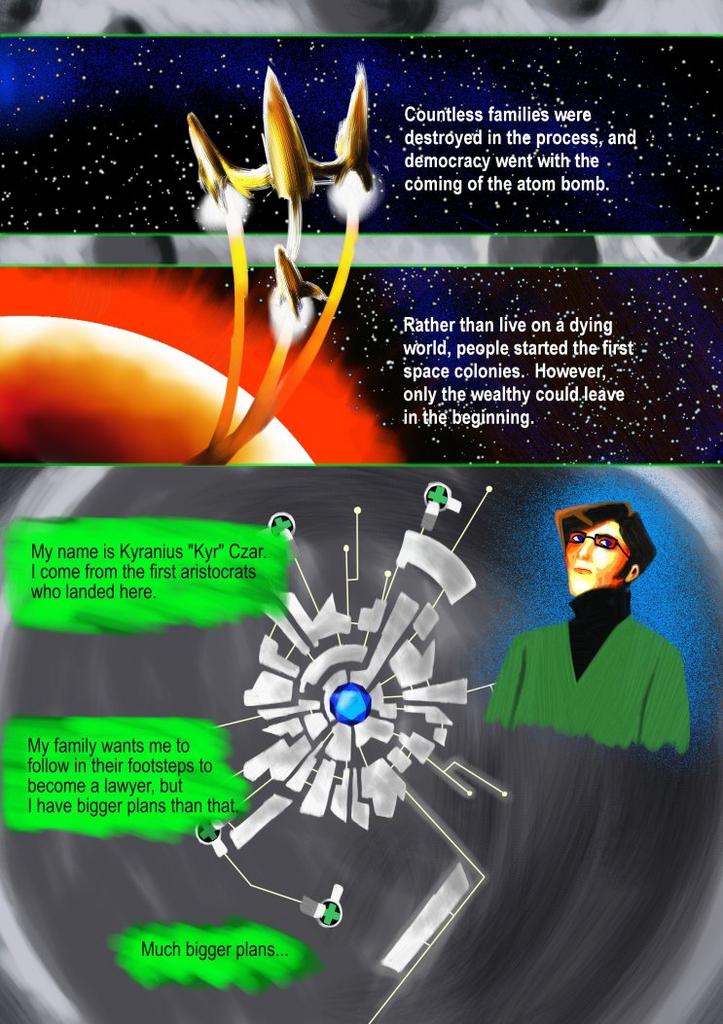 Hiya - your comic has excellent graphics and I’m sure you will go far in this field. My reason for not giving you my credit card number just yet it is that it doesn’t offer anything in my personal interest group. I’m into sci-fi, but in the tragic epic sense. Your submission may excite other members.

Thank you for the reply.

I’m guessing I’m still a month away from posting anything (got to make character ref sheets and make some pages ahead), and I’m freaked out by what people might think about it.

Visual style is good. I’m tempted to say, it might be a tad too colorful for the tone of the story, but hey, several successful webcomics (much of Keenspot’s stuff) use strong colors regardless of the situation.

Add a copyright notice to each and every image file. Nowadays things are copyrighted just by adding the notice and publishing, but you might want to ask about registration procedures in your state for increased protection. Also, international copyright law abides by local laws where a specific procedure is required.

Don’t worry about the competition. When you choose to become a storyteller, you make a commitment to entertain your audience, so rather focus on telling a good story.

You MUST have Daleks in it!

Cornerstone of a good comic is writing. In fact, some comics illustrate that it is indeed more important than artistic talent.

You might want to try and partner with someone who can edit or supplement your writing. I say this as someone who knows a few things about writing, and from the images you posted, I’d say you definitely need a hand in that area.

Dan, in what ways do I need a hand in what I’ve shown of the comic’s writing? I will be revising page 2 of the prologue before I start the main story, which is basically about 5 college friends who take an interstellar “roadtrip” in a stolen ship while miner’s strikes are going on. This preface is just to get the setting down, and to tell the reader why people are living in space instead on Earth. What additional information needs to be on the pages, or what errors did I make in my writing in conveying this part of the story?

Ok, I’ll use the first page to highlight what I mean.

500 years ago, the United States and Neo-Korea were involved in a political conflict that quickly got ugly with a missiles cold war. Then Korea launched a nuclear bomb at Los Angeles.

Also, simply the premise of what’s going on. Why are they really fighting. A conflict that leads to the annihilation of the majority of the planet should have some concrete reason…

America retaliated and threw its own bombs back, taking out most of Korea. Next Iran stepped in the mix and started working together with the Neo-Soviet Union to destroy the United States.

threw its own bombs back: badly worded, and does not illustrate the seriousness of bombing another nation (and killing most of a nation’s population)
As to Iran and the Neo Soviet-Union ‘stepping into the mix’. Why do they do this? What about Europe the rest of the world. There’s no story here. No real Drama.

Before long, major cities were destroyed, civilization descended into chaos, and the fallout went on for years.

the fallout went on for years: fallout, by nature, endures for a long time. It would be better to sat something like ‘in the aftermath of the senseless war, the Earth endured a decade of harsh nuclear winter’.

Anyway, that’s just a couple of points. You did ask for tips, and while I can’t give artistic ones (the art work is pretty good as far as comics go), I can say that in general your writing is just not very good. I’m not trying to be mean, just honest. There are many successful comic artists on the web who do not write their own material, but rather team up with a friend, who will help them with the structure of the story, as well as the writing, while they can focus on making the art to go with the story.

Reading your intro doesn’t make me want to follow the comic, which is the worst thing for a comic artist. You need people to want to continue reading your comic.

Before you jump headlong into actually making the strip, you should work on the story. Brainstorm with other people, bounce ideas of them. Create a draft of the first 10 strips. Edit them, improve the writing. Etc.

Anyway, I have experience with editing, and I’ll be glad to help you reword and refine your writing if you want me to. I won’t just criticise your work and leave you hanging.

Thank you for the reply, Dan. I will make sure to post a corrected copy of the same pages either tonight or tomorrow, and see what you think of it before I go on with the story.

Here is my update. I made some major changes in the text…hope they are alright this time. I tried inserting some more background information. 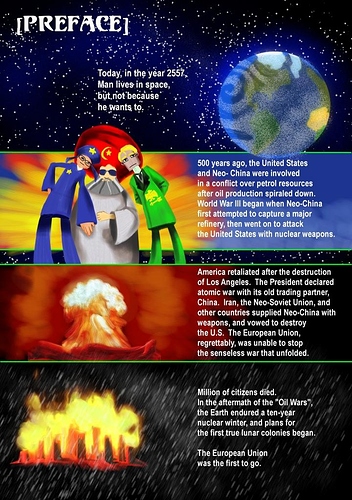 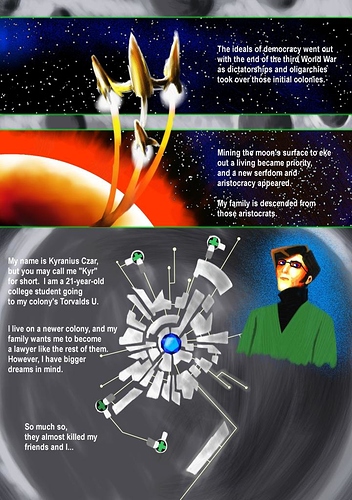 No license is needed to sell your own artwork.

Since this is your own work, you can freely sell your work. Please bear in mind, selling such works would make you a publisher, and any associated laws /regulations will apply to you. For example, if it was adult rated it is likely you would have to have a license to sell such content and also monitor where and who sells them, as well as designate the adult rating.

This is why many manga artists, writers and alike license their works to publishers to manage all these issues / legalities. As with movies, im sure comic books /mangas have to go through a government body to determine the age rating /suitability of the product, though possibly avoidable.

Wow, definitely a great improvement in my opinion. Now I’m interested to see what happens next

I’m gonna get started on the character designs this week.