I’ve been asked to “do something” to graphically lift a website at http://www.stanmorefarm.co.nz

The site is pretty much an “as is” template thrown out from an older version of Microsoft Publisher. I’m going to leave the pages more or less untouched (so the secretary can continue on with her usual updates just as she always has) except that I’ll add a more interesting header done in blender…

I’ll also add a photographic backdrop to the left menu in Gimp.

Not a great overhaul, but then I don’t have much time to give to it as I’m moving up the country in a few days. I’d like to have added more leaves if I’d had time. Nevertheless, it’s the first time I’ve really used paths for anything and I’m quite keen on the technique. Thanks to those who helped out with answers in the modelling thread.

Looks very cool! I think perhaps if you had a little bit less vines and grapes, or made the text a different colour to the vines, it would make it much easier to read the text, as at the moment I really have to almost study it to see what it means.

Do you have any grape clusters with SSS that I could use as an example for the wiki SSS page? I would need a blend file with just the cluster…

Thanks for the feedback guys.

Cuby: Yeah, I also figured it was hard to read, especially once I made the lettering taller. I justified it to myself saying that people visiting the site would mostly already know what it was about. Only the front page has the full version like this one, the others are to have a squashed up version to prevent the viewers from needing to scroll. This shorter version turns out to be easier to read.

PapaSmurf: There is no SSS because I’m using the 2.43 blender which comes with the latest Ubuntu distro. I thought when I made this that SSS would be handy. The grape clusters are only a bunch of spheres with col & spec ramps used to fake SSS. Here’s the bunch if you want to play with it: http://uploader.polorix.net//files/320/helprequests/grapes_01.blend

The design is nice and clean. The text could have used a wee bit of bevel, and the leaves could have looked a bit more like vine leaves (I could scan you a leaf if you want).
Good lights.

I scanned one, my vine is a wee bit sick so the leaves aren’t huge but I took the best leaf I could find.

made a png with alpha layer so you can directly use it.
http://rapidshare.com/files/34424909/vine.png.html

here is a little “proof of concept” 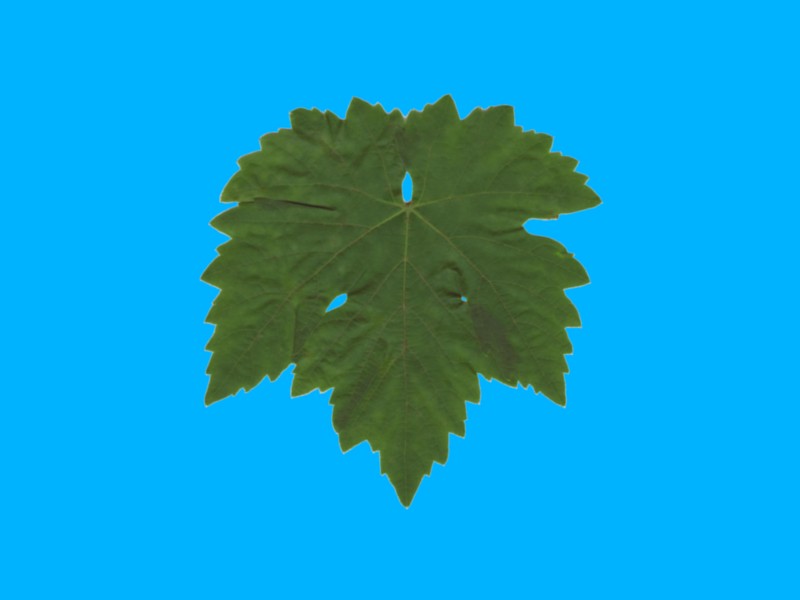 Thanks for going to the trouble of scanning the leaf and everything snelleeddy. The leaves I’ve used are already scans from real grapevines. The man at the nursery loves pointing out all the differences between the varieties. I do think you’re right though, in that yours is more of the generic grape-leaf shape. I made a mistake using subsurf modifier to smooth out the curves when I made leaves droop. This resulted in loss of definition on leaf edges, which I corrected just before putting the final website online. It’s very subtle and I didn’t think I’d have time do worry about such things (hence I decided to put this into “Finished Projects” instead of “WIP”) but then I knew it would bother me if I let it go.

Here’s the actual site as it is now. The changes I made were the blender created header, and also a little enhancement to the left menu which was made in Gimp.

If I had time, I’d rework the leaves from better shaped samples like the one you’d posted. I would also add more leaves, although it was interesting to hear Cuby’s response that I may be better off with less.

Looks good - Perhaps a little more space between the words. I was trying to read “Farmland” at the end for a good 10 seconds until I realised it was “Farm LTD” !

Your grape cluster (with a little material tweaking on my part) is now a famous example of SSS!!! Thanks again for sharing. http://wiki.blender.org/index.php/Manual/Subsurface_Scattering

from a web design point of view your banner is too high and the angle is too extreme for legibility. It’s a good model though!