Weeping Willow by the Water

Still trying to get a good landscape going. It’s tougher than one thinks. This is another one of my Gaea landscapes brought into Blender. The tree was created by using The Grove addon. It’s an amazing addon for generating trees. I’ve just barely touched the surface with this addon. Done with Cycles.

I’m a huge fan of sci-fi so on this world some of the fish can fly!
Comments welcomed. 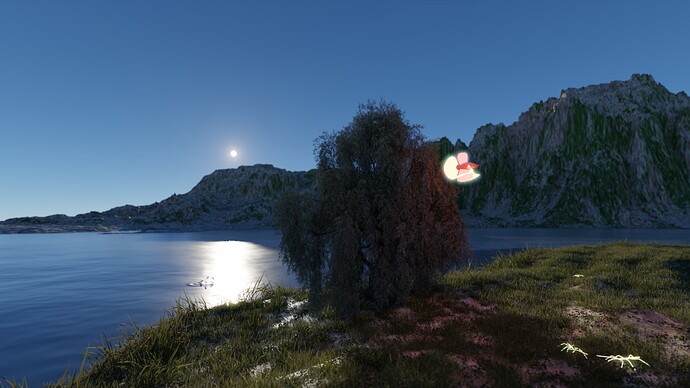 I was curious to see how this was a Sci-Fi image. I think you might be better served by removing some of those elements and sticking to the landscape, which looks really nice. One of the issues is that each land mass is different (one grass and sand, the other rock and snow). It doesn’t make sense. You could try to have just the lower elevations match (with grass, etc), or just have both as the same type. And using the Composition Guide in Blender cameras, maybe try to line up the tree along the center line or the 2/3 vertical line (using thirds). The tree is completely silohuetted by the light source which is a bit of a shame, although the fish is lighting it up somewhat? (that’s cool). Did you try moving the sun to the left? If you want to go the SCIFI route, I don’t think it says “Sci-Fi” just yet, you would have to work more at adding a lot of SciFi elements, so the creatures become a little perplexing as to what they are doing there or what exactly they are. I like the idea of flying fish though. Maybe you could remove the spiders and just stick to having like 10 or so fish flying around.

Thank you for the advice. I tried to incorporate some of your suggestions but my poor old PC had a tough time of it. But here’s what I ended up with. The terrain still isn’t ideal but I don’t think I can add more plants. Just that small patch is it. Still learning so I might try something different next time. 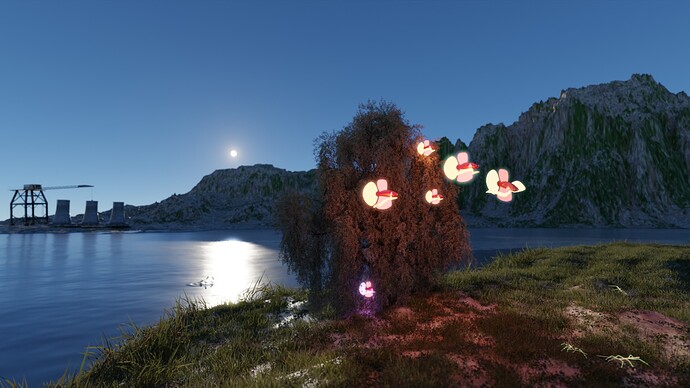 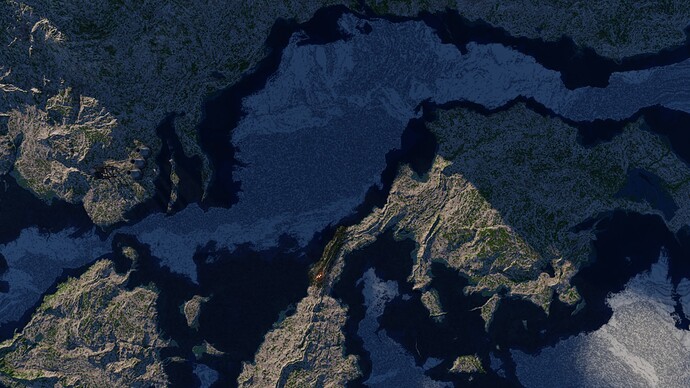 Neat aerial shot. That’s a lotta landscape. I didn’t realize there was so much.

What you can do is go to top down view and change the size of your camera’s Viewport Display so that it stretches back to the far Clipping Plane. Then you can hide things outside the boundary (and hide from render) to optimize the amount of geometry you are dealing with.

That’s a cool effect where they light up the tree, don’t you think? That’s what makes Cycles so nice.