I am currently working on importing Poser 5 model as Wavefront objects into blender and then apply the Poser-exported animation (in Bvh) to that model. I succeeded so far in importing everything. Then I parent the model to the armature (using vertex group creation by name). When I then start weight painting (selecting one bone and painting the appropriate mesh section) i get the attached weird result.

Has anyone seen such a thing before and can give me a hint what I am doing wrong here?

I want to add that my armature is imported lying in the x-y plane from the bvh, while the object is imported standing on x-y-plane. So I rotated/scaled the model into the armature position. Can this cause such problems? 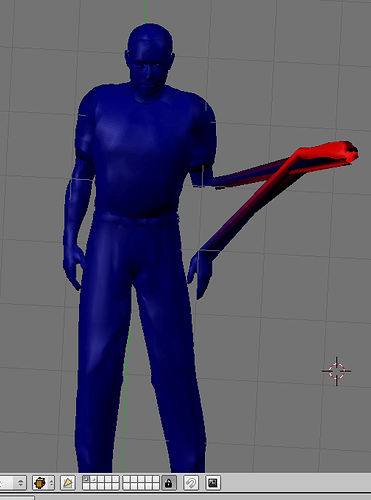 I have seen a similar bug report. make sure the mesh and armature have the same loc/size/rot before parenting.
This will probably mean moving the verts around in editmode to match the armature.
Then re-parenting in your case. You can keep the weights you have.
This should solve it.

I am working on a similar project and I put the armature in rest mode and in object mode and rotated the armature 90 degrees to align it with the mesh. I also cleared ROT/LOC/SCALE on the mesh. Then I did a series of BVH imports to determine the import scale for the armature. This way the scaling of the armature was handled in the import script and not after the fact as a scale on the bones.

Thanks ideasman and atom for your answers. I tried clearing rot/loc/scale on the mesh and the armature as well, but that doesn’t seem to solve the problem. I also get screwed vertices of the mesh when I already do the parenting of the mesh to the armature using CTRL+P (selection of the method has no impact).I also wondered that my mesh in Wavefront from Poser and the BVH seem to be rotated to each other by 90 degree, which I would not have expected considering that they match in Poser. So maybe it is more a problem with import/export procedure of wavefront and bvh files from Poser to Blender. I will give ti a new try during the next week and see if I can find a solution.

You can always put your mesh in edit mode, select all the verticies and rotate it 90 degrees to align it to the armature. Then exit edit mode and your mesh will be rotated, but the rotation values will still be zero.

Thanks for the advice. I will give it a try and see if that works.
Otherwise I bug you again