Hi, I am currently in the process of converting from 3dsmax to Blender. So I started to model a character. So far I am really finding the interface and workflow to my liking, however, I have some issues with the smoothed model after the Subdivision modifier does it’s thing.

For some reason the smoothing is jagged on some places on my model, I cannot seem to find out why, or how to fix it, any ideas? The issue only makes it’s appearance in the render, not in the shaded viewport.

Increasing the number of subdivisions in the modifier doesn’t affect the issue.

See the attached image the red arrows are pointing to the issue, any help would be greatly appreciated! 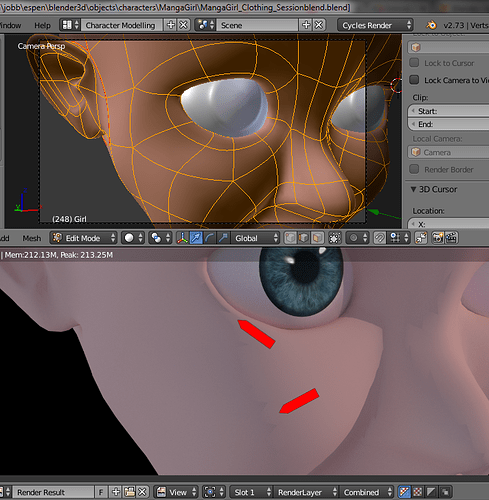 Have a nice day

Looks like so called Terminator issue. Still, try increasing Subdiv levels; there is not much other ways around.
What are your lights?

Terminator issue? Thank you! Once I turned the level way up it disappeared. Any way to minimize it on lower levels of subdivision? It kinda looked like the smoothing angle of the smooth shading got messed up on some parts, or is it something else?

Lighting is nothing to speak of, just an environment map and a point light. I still haven’t gotten around to fully understand the lighting stuff in blender / cycles. I’ve focused on learning the modelling and uv texturing workflow for now.