The first finished-ish piece from my Asylum series. Since this is not only my first blender project, but also my first completed render, please give me any feedback. 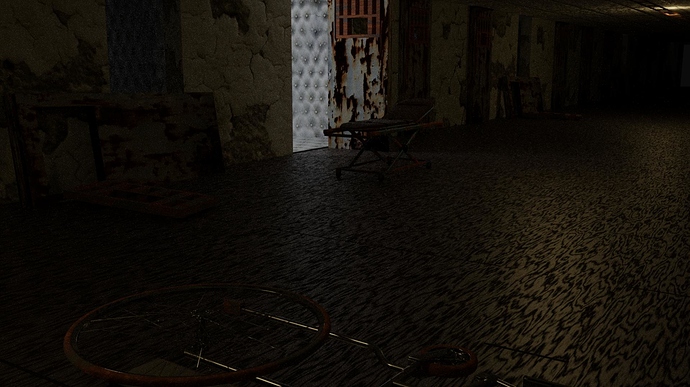 I feel like everything works except the bars, and I don’t know why the texture seems to stand out so much more than everything else. Possibly because they are one of the few textures I made, rather than using either procedural or image based textures.

Also, version 2 of the same- I think the composition on this one is better. 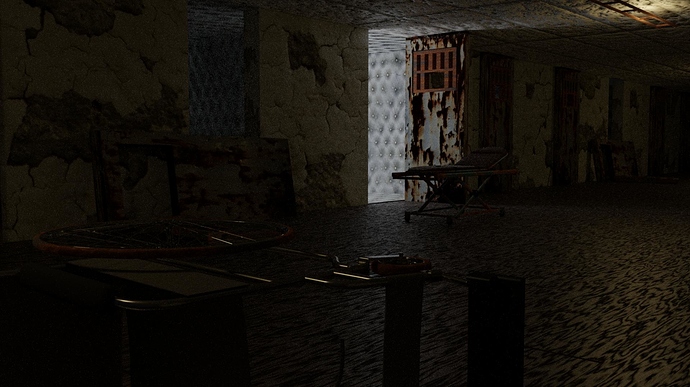 Welcome to Blender! It is hard to tell what you are trying to do, and where you are coming from, all from just one render. Is this “series” meant to explore Blender’s features? Do you have more polished results using other tools? Are you trying to make pretty renders, or well-composed images, or good models, or is this setup for an animation?

Setting all those questions aside, I encourage you to do more planning. Everything I can see here looks like it was done in a single pass. With more planning, the scene may hold together better, and the pieces will look better individually. I realize it’s difficult to do planning when you’re still getting used to the tools. But when you are learning is the most crucial time to cleanly differentiate experimentation from production. You say this is your “first completed render” which seems like a bad sign no matter how I read it. If it’s the first time you have pressed the F12 key, then I encourage you to experiment much more! Play with settings, and abort renders in the middle, and see what you like. If this is the first render you have gotten through your whole creative process to a place you are happy with it, then I encourage you to take a step back and work on your overall process instead of your Blender skills. Make sketches, do color studies, gather style elements, write a narrative.

Once you address the larger concerns you will have a lot more context to inform things like texture choice and lighting. It isn’t just a matter of doing more work. It’s about doing the right kind of work at the right phase in the project to achieve the goal you are working toward.

Thank you for the feedback. I’d start by pointing out I said “finished-ish” in that this is a stage where I feel showing it to people will be useful, and that it is approaching my end goal. To that , I am going for a stylized photo-realism that will eventually slow me to create plates for use in green screening for a bigger project. I’ve made a number of models, objects and scenes, but this is the first time I’ve tackled a project on my own trying to use the skills I’ve learned thus far, rather than following along with someone’s tutorials.

It is by no means “done”, and I have a lot to learn, but I feel that this captures the general idea of what I am trying to do and create. My real next step has to be figuring out how to break things into smaller chunks with a definite end goal, as right now I’m having to build far more than is seen to give myself a sense of context, which is a waste of time and effort, and prevents me from working on the nuance and details that really make these things come together.

But those bars… I’m not sure why the rust went so sideways… At any rate, thank you for your input and it gives me some things to consider. 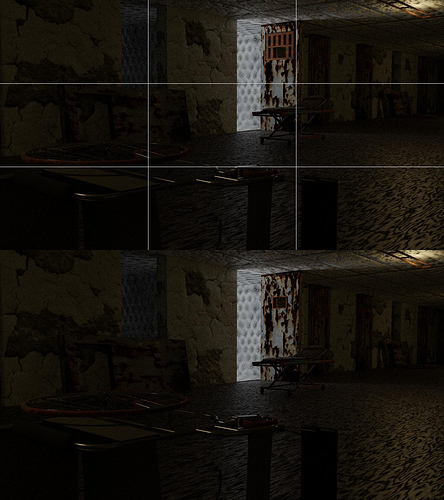 The reason the bars stand out is because it’s in the area of high contrast which is also near the thirds point, so the viewers’ attention is there first. The bars themselves create another contrast in texture in that area. They’re exceptionally thick, and they don’t follow the wear on the door.

The story is not clear. You titled it “Welcome home” but there’s no indication if someone got brought in, or if someone escaped. If someone escaped, one way to show that is to have both gurneys tipped over, and one or two bodies next to the door. If someone was brought in, could try showing partial parts of people like they’re pushing something, taking straps out, and/or shadow figures might work.

The gurney orientation seems a bit inconvenient. With so much space, could have the gurney pointing at the door so that two guys can grab the patient on both sides and head straight to the room. Either way, it’s strangely well aligned with the walls.

Inconsistent wear. The place has seen better days, except for the room interior. The gurney closest to the open door seems small, or the door is very big. Not sure, but by the looks of it, the gurney could be placed upright and it would still fit through the door just fine.

Things closest to the camera need to be more detailed than ones further away. Floor and ceiling textures don’t hold up for that.

I definitely need to account for DOF on the finalized version- Thanks for pointing that out, though in this case, it would be a deep DOF, rather than a shallow one, so things closest would need to be less detailed, focusing somewhere around the gurney, then blur again to the back.

The room interior is supposed to be pristine and welcoming in contrast to the exterior hallway, hence “Welcome Home”: The solitary cell is supposed to look almost heavenly, with the white glow, the place the person wants to get to as a refuge. You are here of your own volition, not by force, and this is where you want to go.

As far as the gurney goes- It’s scaled properly for real life dimensions, as is the door. The orientation, along with the wheelchair, are supposed to be reminiscent of what you might stumble across if you were to go break into a rundown sanitarium now- Where other people may have been through and played with things that were left behind (I plan on adding more details like graffiti to the walls as I develop it), but they are also supposed to serve as obstacles to reaching the cell.

The bars, squares and all, were modeled after real cells from the turn of the century, but it might be a situation where artistic liberty has to step in to make it more aesthetically pleasing, and I’ll have to continue to tweak the textures on them until they sit right.

The texture on the floor looks wrong. should be less dramatic. If they are putting the patient into a padded cell, shouldn’t the door be padded as well? Also the wheelchair tubing and wheels all seem to thin. You should be able to see the cloth for the seat either riveted to the bar that it attaches to or wrapped around it. I cant tell what is lying in front of the window but why does it repeat down the hall? Perhaps add a bulletin board with old papers tacked onto it to help tell the story.