Close up on the eyes:

Check it out guys, this is a werewolf I am working on.

Throw me some crits please! 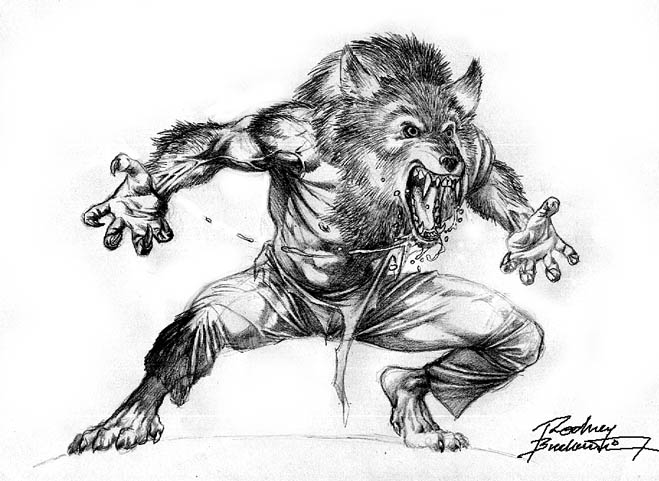 well considering it’s a mythical creature, i think one can take one’s own interpretations…

The body style and pose is very Dog Soldier-ish; you might check out that film for tips.

It’s hard to tell, but I think the center of mass is too far back instead of balanced over the feet.

The feet suggest dragon/dinosaur to me, rather than wolf. I’d also worry that it’d trip over its own feet or catch a claw on the inside of its legs. Perhaps spread the legs out more, shrink the feet, or splay the claws less.

Comparing the two screenshots, it looks like the lower jaw opens like a drawer instead of pivoting on a hinge – or, that the werewolf disarticulates its jaw to swallow something large, like some snakes do. Of course, it has no bite strength while the jaw is disarticulated … Basically, just think of what the bones of the skull would look like and how they would move.

Sorry Ysengrin, I just saw your post, and I agree with what you said, so I am going to apply some of it to the next update. I also added a bit more bulk to the creature, it does need more though.

Think that kind of creature must have an extreme musculature and prominent bones and a strong jaw. But it*s a good base

You could add the muscle’s with sculpting

It´s a good model but needs much detail.

I don´t like the long ears and the short snout. Also it needs more shoulder and neck muscles.

I sculpted a werewolfhead a bit ago. I´ll attach a render as inspiration, although I´m not quite happy with it - it looks too dog-like (1st sculpting I ever did) 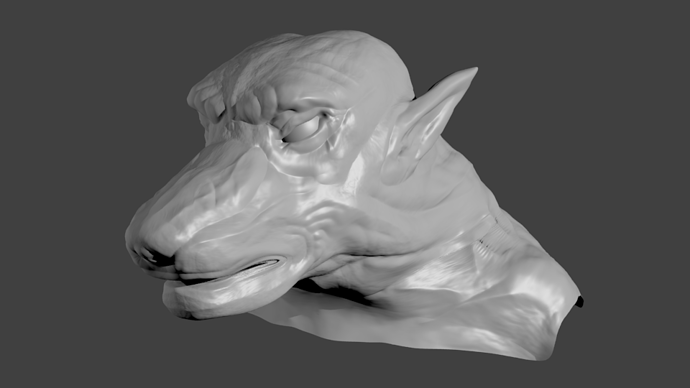 Maybe just try finding more references…i’m sure it won’t be hard with google around XD
But yer, the feet and the ears are what really stands out to me, the ears are too narrow and long, while the feet remind me (quite heavily) of a velociraptor (dinosaurs are cool, but they aren’t wolves)

I’ve always been amazed at how fictitious creatures have to follow the same set of guidelines as all of the ones done before(dragons, werewolfs, aliens, etc) I like that you did something a little bit different. A few things look a little bit funny to me though. The head could be scaled up a little. It seems kind of puny compared to the body. Don’t know how I feel about the short middle toe, and maybe its just me but it kinda reminds me of Stitch from Lelo And Stitch just on steroids.Keep it up though, and keep up being original!

The tail seems like it should taper a bit sooner, but other than that, well done. Can’t wait to see the finished product!

Thats a zbrush sculpt. I might redo it. Not sure how well it will translate back over to blender.

It looks great! I also like how you are breaking away from the traditional werewolf somewhat. Also, in my opinion the forehead and perhaps the back of the head should be more defined/less round.

Wow that is amazing Shukrallah! I can’t wait to see it finished.

Took it out of zbrush and back to blender as a test. I wanna redo the pants. I’ve got a lot more detailing to do.

Started texturing. Feedback would be great.