What about non-flat planes in modeling?

Sometime vertices of surfaces are not aligned as they should be. For example you may have rectangular face where one of vertices not in the same platitude as the others, may be not noticeable for an eye. What attitude 3D artists/professionals have to such crooked surfaces, is it ok to have them, if not what consequences ?
Are they happen when modeling living creatures ? 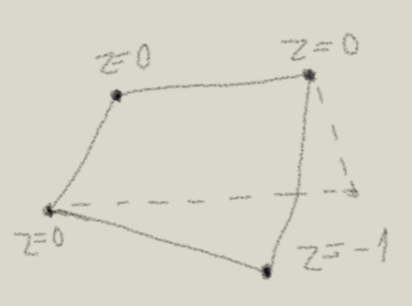 Polygon faces are either planar or non-planar. You shouldn’t have to use none-planar faces in a proper modeling workflow, if they are unavoidable then you can try and reduce their effect by increasing the polygon count of rearranging your edge flow

An easy way to spot non-planar faces is to turn on ambient occlusion under display in the “N” toolbar and then turning up the strength.

Thanks.
Who knows what consequences of having them?

Bad shading being the most obvious, most modifiers and tools in Blender and other modeling software won’t work well with non-planar faces depending on how extreme they are.

Instead of trying for “planes that aren’t flat,” consider using other tricks – such as normal maps (“bump maps”) that use randomized or even painted-on sources. As you know, a normal-map alters the direction of the surface-normal at a particular point so that the “angle of reflection” doesn’t match the “angle of incidence.” While it’s most commonly used to make a flat surface appear “bumpy,” well, “in the end, it’s simply what the light does” – or what the viewer’s eye tells him it appears to be doing. (He’ll never know how or care the computer has modeled it. Just “fool the eye.”)

Non-planar polygons are unavoidable and it’s normal to have them. Smooth shading hides the edges that come from automatic triangulation.

It’s severely non-planar polygons that cause problems. The most common reason for having those is improper structure flow. Another is too few polygons for the form