If there was such a version.

It was actually created before computers were invented. It was a box that came with tinker toys, crayons, and tape.

Yeah it was running just behind Maya, dam them for inventing permanent markers before Blender!

Lets just say blender has come a long way since then.

something made for neo geo i think…

Here’s a screenshot of 1.6. Very interesting. 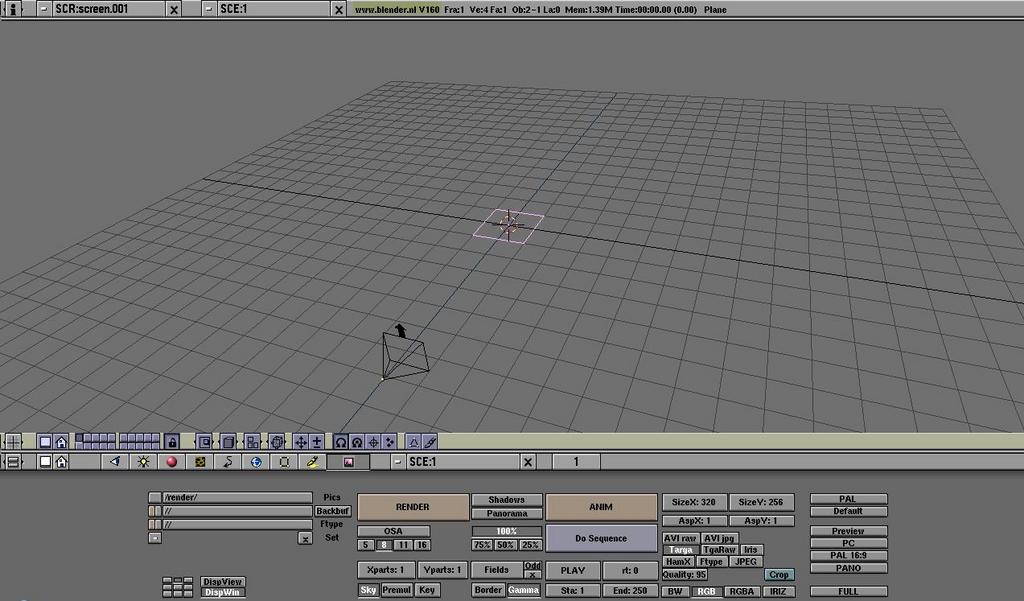 Of course, it’s a trail version, cause this was before the open sourcing, but still interesting.

It wasn’t exactly a “trial” version. It was a free version which had fewer features than the non-free version. You could buy the C-Key, which would unlock "C"omplete functionality. I don’t remember which features it unlocked, though. This was long before there was a raytracer or anything like that.

Later on, at the end of Blender’s commercial era, the unlockable feature was the game engine runtime exporter. You could do anything you wanted to–but you couldn’t make a game stand alone unless you ponied up the dollars.

These statements may not be 100% accurate. This is just how I remember it, because I was there. Proudly Blendering for ten years.

The basics of the layout of at leat the render tab looked pretty much alike the ones of today… O.o

was the gui already splittable ?

was the gui already splittable ?

I’m not sure exactly what you’re asking. You could split up the panels to make more panels, but you couldn’t move the buttons around.

Back in the days a magazine had a cd with blender in it. This was around about a decade ago and the magazine had instructions on how to do a facial mesh . . . of the chick in the first stars wars movie. Not the star wars one with Luke Skywalker (Mark Hamill) and & Princess Leia (Carrie Fisher) but the one that is supposed to go before. Sadly the magazine was beyond my price range . … and I never bought it to hoard it or something.

Blender originally started off being called "TRACES". TRACES worked on the Commodore Amiga, then was ported to Silicon Graphics where it was re-written, and then re-named to Blender.

Blender 0.01 … I don’t think it had a GUI or an interface at all. From experience, anything that starts out that early is a pile of code that outputs tests, such as loading a test file with a list of polygon information. Or making a pyramid or cube rotate.
It would be certainly interesting to see what it looked like… probably just an io runner.

Why nobody talks about the 1.39MB memory requirements?

I remember the book that had a disc in it. That was my intro to Blender.

Everything changed completely with the total-rewrite of the user interface which happened several years ago now. To me, it’s the single most-important thing that was ever done and it revolutionized the product by making it truly and easily accessible. I’ve dealt with plenty of software products all my life, and I never before saw a project that went-off as cleanly as this one did, and that made such a difference. Kudos to the team members and project managers who made it happen. Amazing!

Before then, Blender reminded me a lot of “WordPerfect® for MS-DOS.” (The one with all the funny colored letters on a character-mode screen.) There was a lot of power there, but it was all buried behind arcane keystrokes which might have made sense to someone at some time. “Shift+Control+Scratch-your-nose” stuff. Really awful.