What does the TRANSLATE (not grab) tool do?

Well, call me stupid if you want but today i discovered a tool i’ve never hear of when i accidentally hit “shift-t”.

The tool apparently created some sort of “cage” or “bounding box” drawn in dashed lines on the viewport and that’s it. Nothing else happened. :eek:
I went to the input window and found out shift-t apparently calls the “Translate” tool which is different from everyone’s translate (aka : grab tool). Hitting shift-t again and then F6 indeed brought a panel called “translate” which options for proportional editing and a few things that lead me to think it’s got to do with moving stuff, but it doesn’t (apparently) move anything apart from the “cage” i mentioned above. That one persists in object and edit mode and apparently is linked to an object (or maybe a mesh) because it’s grayed out when i select another object.

Now, i’m curious what that tool does and how to actually use it but i would also like to know how i can get rid of that “cage” because i can’t even figure how to remove it.

Of course, searching for “blender translate tool” gives me a ton of links about the grab tool and a few ones about translating documentation pages but nothing about that elusive tool

Shift-t actually triggers “texture space” not a translate tool. You can hide the cube again in Properties>Object>Display

It’s called Grab/Move in the menus but the operator itself is called Translate.

Shift-t actually triggers “texture space” not a translate tool. You can hide the cube again in Properties>Object>Display

Now that you told me this, i actually discovered that it does actually trigger the Translate tool, the same used by the “grab” action (as shown by this F6 pop-up after using shift-t) 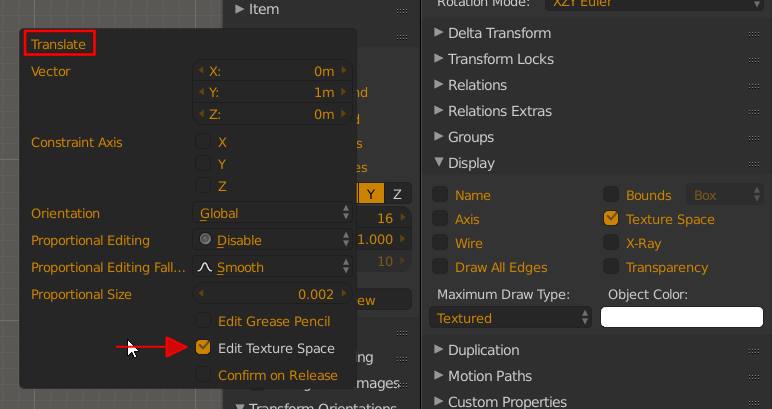 However when one uses shift-t the translate tool is called in texture space mode (indicated by the arrow) which can also be enabled when using the “g” shortcut. In other words both shortcuts call the same modal operator with different options (added in case someone else reads this)

And yes, i never used F6 on the “grab” action before which is why i didn’t realize the pop-up was the same.

Yes, it’s a bit weird. Reading my post again I’m realizing that it wasn’t the best answer to your question. But I’m glad it helped you to find out what’s going on.