It looks like Blendswap has been down since about late June of 2022. I can’t seem to find any answers. Does anyone know what happened?

It’s not down for me (I just checked). However, I don’t see images. Hm. I seem to recall that when I last went, Firefox tried to stop me because of an expired certificate. Could it be your browser is set to automatically deny access in such cases?

I’ve been wondering the exact same thing. Managed to download a few models in June, but about a week or two ago I started getting a warning message when I tried accessing the site from both my phone and PC.

Their https certificate expired 13 days ago. They are using free let's encrypt certificates, so I guess their renewal script stopped working. I have filled the contact form now to inform them about this issue. 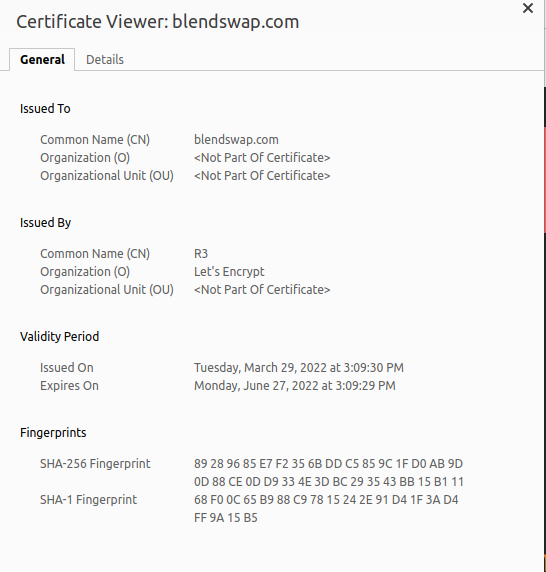 Yay! Hopefully this gets resolved soon.

I was beginning to worry that maybe the site wasn’t receiving enough donations and could no longer support itself.

I did the same.

Whenever you get an expired certificate alert in Firefox and still wish to view the site, click Advanced, than Accept the Risk and Continue and then you should be good to go.

An uploaded model took a month to go online.

I am afraid the site has no administrator to take care of the daily operation.

I’ve tried about 6 different computers, Both MAC and PC using Firefox, Safari and Chrome. I get the same warning.

I just did that and it does work. I don’t see the thumbnails for the models though. Is this happening to you too?

Me too. It makes sense.

I don’t see the thumbnails either. Try just accepting the risk though. I did and was able to get to the site.

I don’t want to knock on BlendSwap given it’s a free model repository/resource and all, but they kinda set themselves up for a massive challenge by not having a higher quality threshold for their models. Assets made in Blender 2.6 and 2.4 might still be technically good overall, but we’re on Blender 3 now and the level of quality just doesn’t compare. Also there’s quite a few models with questionable topology, not to mention all the files that contain dozens of unorganized and unlabeled objects.

I understand they wanted BlendSwap to be a site where you can share models and learn from what others make, but…yeah. All the so-so projects and downright bad ones can’t be helping the site’s storage costs, can they?

Ahem…Start mirroring. I don’t think that comment harms the site because to download much you have to be a paid supporter like I am. Having paid then seeing the site broken raises questions.

It’s still happening Jan 2023. Does anyone know what’s going on? If the author needs help with a letsencrypt script I can help with that.

The last certificate expired on 2023-01-01. There’s always a flurry of those during renewal times. Some sites can’t seem to get their act together for something that happens, after all, regularly like clockwork.

I sent them a message about it.

Writing anything to them here is probably useless; is the site owner even a member? Try their webform contact: https://www.blendswap.com/contact

The comment might not harm the site, but it’s still not allowed here - discussions of pirated media, including encouragement or discussions about method, are not allowed on BlenderArtists

I didn’t think there was anything wrong with hoarding Creative Commons assets. Why do you say that?