What happened to CG-discussion boards?

I’ve noticed that both blenderartists.org and CGTalk - and other forums have very little activity lately. For the past year actually.

In the “good ol’ days” (years back) CG-discussions were at its highest. Blenderartists.org is the forum with the most activity, but take a look at the worlds largest community: CGSociety. It’s virtually dead activity. At least, very few replies in the threads.

I don’t know about CGTalk, but here on Blender Artists the activity has almost doubled since we relaunched last year, and we’re close to 4M pageviews/month now. I’m not sure what you base your claim on?

I’m wondering about Foundation3D.com. It used to be very active, but now the homepage hasn’t been updated in years. There’s still activity on their forum but I don’t think as much as there used to be.

It’s just that there are fewer replies now, than there used to be.

I asked this very same question on CGTalk about a year or so ago, and the general consensus was: Social media. That’s just the way the new kids like to communicate these days. I myself used to frequent CGTalk many years ago, but not so much anymore.

BA, on the other hand is definitely more active. I think that’s because it is a sort of microcosm of the subject matter (CG/digital media) based around a thriving piece of software that is community driven. The discourse upgrade may have played a role, but then CGTalk just got that overhaul as well, and it’s still pretty stagnant.

It’s just that there are fewer replies now, than there used to be.

No, that’s not true either. The number of replies has increased too. It might be true for specific categories, but not for the site as a whole.

I’m on my phone right now so getting reports is a little hard, but here’s an overview of the total number of topics and replies for the last 12 months: 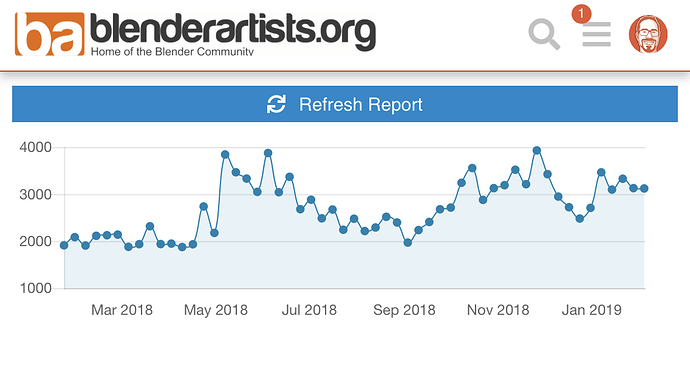 And the number of new topics: 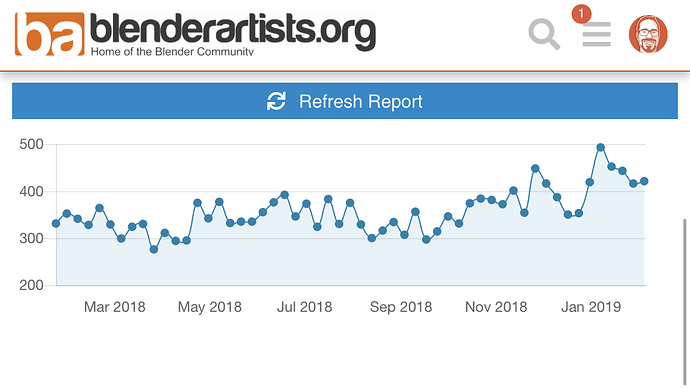 I agree. Just yesterday, I witnessed a thread post in the support section receive 5 or 6 responses on different ways to solve the problem, all in the span of about an hour. That’s what I love about this community.

For me, social media is for family, friends, and business networking. Forums are still the bee’s knees for areas of interest.

CG-Society’s lack of activity could’ve been due to the numerous changes the new owners did that, for many, made the site harder to read and far less usable. It did not help that it took a long time for them to start making changes for the better, many have left amid the feeling the owners did not care at all about the userbase.

BA meanwhile has once again seen active maintenance and an effort to improve the site, and the traffic has reflected that.

Cgtalk had (has?) unwelcoming, miserable, condescending, patronizing and narcissistic moderators that sucked the life out of existing members and scared off newbies.

Elysium and Blender Artists is soo joyful and welcoming. Everybody is welcome here

Inertia.
Basics. Simple topics about techniques, styles, arts, opinions… debates & discussions have been covered more than dozen of times for the past ~couple of decades. The more complex the topic gets, smaller is the number of individuals capable and able to share or discuss on the topic/matter at hand.

As ‘mental/gnostic’ gap (skill-experience-knowledge + working history) between newbies and pros gets wider, probability for failed communications, battles and a war gets higher. So when such actions are concentrated in small area (couple of places) growing intolerance demands dispersion of accumulated energy & force, otherwise extremes like “total collapse” (revolution) become inevitable.

Globalism - global centralized powers / empires - already show its greatest flaw: Intolerance against minorities. Which is when & where democracy can fail miserably.

I used to read CG-talk a lot 10-15 years ago just before I got my first CG related job. I got tired of the attitude after a while. It felt very elitist to me.

When I bought my Modo license back in 2008 I started hanging around the Modo forums. The Modo community was great back then.

I think it’s a bit more spread out these days. A lot of what used to happen at message boards happen on other types of social media like Facebook, Slack etc.

It’s very much the same with all communites I’ve been a part of. There used to be a lot of sim racing forums. Most of that happens on Facebook now.

It’s very much the same with all communites I’ve been a part of. There used to be a lot of sim racing forums. Most of that happens on Facebook now.

I wonder if independent forums will start making a little bit of a comeback now.

Facebook over the last year has been stumbling from one scandal to the next and new reports of ethical violations seem to come out every week. Then there’s the issue of there being no such thing as an usable archive, useful info and interesting topics will get buried and never seen again. That’s not to mention the constant rule and UI changes and the strict AI-powered speech policing.

The only real advantage of big chat type platforms is that you only need one account for everything, but forums still hold a huge advantage in things like archiving and formatting.

I don’t know, I think forums will be less and less relevant with each new generation. The next generation to use the internet probably couldn’t even fathom the idea of typing a post on a forum, then waiting days, hours, or even minutes for a response. Heck, I’ve even seen evidence of that a couple times (people bumping there post after a couple of hours).

And according to my younger brother, who is 25, even Facebook is “for old people”. These days it seems to be all about the formats that lend themselves to an ever shrinking attention span; Twitter, Instagram, Snapchat. That’s not to say forums can’t make a comeback, or that they’ll die out completely. Discourse goes a long way to revitalizing the format, for sure! However, my money would be on another new format appearing that makes it even easier and quicker to get: help/information/news/insta-gratification.

All I can say is @bartv, it would probably be smart to keep an eye on the trends and demographics over the next 5 to 10+ years. I imagine you’re pretty savvy in this regard, though. I mean, you did run one of the first crowdsourcing campaigns on the internet, after all.

I don’t know, I think forums will be less and less relevant with each new generation.

I’m obviously biased, but I’m not sure I agree with this. Regardless of generation, people tend to have niche interests. Large generalized social media platforms can’t cater to niches nearly as well as a dedicated forum or website can (despite the famous “echo chamber effect” that the advertising algorithms on these platforms reinforce)… especially when there are multiple variations of those large platforms. Why fracture your attention across a small segment of 3-4 large platforms that partially cover your interests when you can focus that attention on the one place that’s devoted to your specific niche?

As far as I can tell, it’s a swinging pendulum between the convenience of a centralized platform and the focus of smaller, dedicated niche platforms. Where’s the pendulum currently swinging? That’s the question I’m curious about.

What about CGSociety? I think it was among the respectable forums? What about now?

CGTalk has always been horrible, maybe people are just now finally starting to see it.

They got horrible when they started to focus on 3D companies instead of the 3D artists.

In my opinion, the decline started during the period where CGSociety seemed to be more about politics than CG, amid the mass layoffs from VFX companies a decade ago. It was also about at that point where interesting discussion on the latest blockbusters and the CG and technology within largely vanished.

The activity on the site, as I recall, went down during that period (but there was still a fair bit of discussion). As I mentioned earlier, the site’s highly controversial redesign a year or so ago drove many of the remaining users to either leave the site or become inactive. It does seem though that activity is again on a slight uptrend based on posts per day, but it’s still far from its peak.

the forums here are free so take your time and wait
otherwise hire some one and pay for the service !

Many years ago I used to post my WIPs on there but instead of constructive conversation all hard got was harsh criticism. People started arguments with me then I got banned from posting in the WIP section. I have asked several times over the years to be reinstated and never got a reply. I suspect much of it is due to the extreme distaste for LightWave users over there.