what the lesson cannot teach (July 4: update on pg3)

Update: See page 3 of this thread for latest render 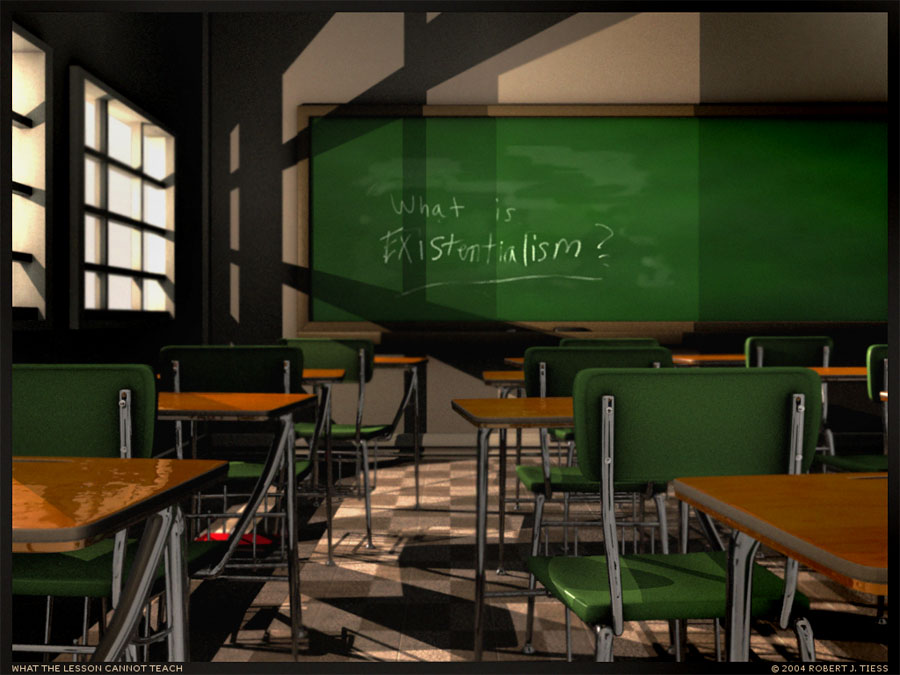 Btw what is existentialism?

Existentialism: n. A philosophy that emphasizes the uniqueness and isolation of the individual experience in a hostile or indifferent universe, regards human existence as unexplainable, and stresses freedom of choice and responsibility for the consequences of one’s acts.

Existentialism: n. …and stresses freedom of choice and responsibility for the consequences of one’s acts.

Great job, nice composition and render. I love the erasure marks on the chalkboard.

Two crits: 1. AO is a little too heavy, as seen around the border of the chalkboard and the between the chairbacks and their struts.

Nicely done. The two things that caught my eye were: - The rather unexpected specular reflection on the desktop in the lower left corner of the frame. - The unexpected path of the light coming through the window. That is supposed to be sunlight, but if sunlight is diverging like that…

I think the table on the left side is way too shiny, probably because it gets more light onto it. Other than that, it’s another great work to add to your collection, good job man.

I won’t crit the image in general and concept, becuse it’s really good.

There’s one big issue though - the DOF blur is totally wacky. If you were photographing that scene, you’d focus on the blackboard, not the edge of some random table in front of you. The blur also seems to begin happening at a distance very close to the camera, but stays about the same throughout the entire distance towards the front of the room. It’s debateable whether a scene like this would exhibit any DOF blur at all, under the circumstances.

/me votes that anyone wanting to use a DOF blur effect should actually do a photography course and learn how it works in practice!

Abusing it gratuitously generally does more harm than good.

I’m having trouble watching the pic.

i get a red cross

Yes, I don’t see a picture too, where can I find him online?
Wait a sec, maybe I can find the site with a right mouse button click at the cross and then properties.

Hmm… just checked the link… image should be visible

Nice pic,
The lighting really emphesize the theme. But you can experiment with the lighting to fine tune the effect. Try more realistic and harsh lighting.
And I wanted to join the rest of the philosphers here:
Seems like everybody is afraid of death, but where were you a century ago? And yet we all have the feeling we are in a state of existance since the begining of time.

cool render. What really blew my mind was the red book left behind by a student under the desk.