What type of color management do you use in the bge?

i use linear, the depth is fantastic and textures are easy to manipulate.

What is cool is to use linear and apply a custom tonemapping filter + a noise (dither) function in GLSL to have a slight grain and choose your tonemapping. There are many simple and cool GLSL filters on the net for tonemap and dithering, worth to try it.

In UPBGE they actually removed Linear option for some reason, but here’s how I do it in a 2D filter:

This works fine with HDR option set to at least 16-bit per channel.

In UPBGE they actually removed Linear option for some reason

When the color management was added, BGE projects could be made to largely look the same (yet reap the benefits) by simple tweaks in the lighting and materials.

It would be a mystery to me as to why the developers of an engine would take it out if they indeed did so (an actively developed engine with no color management is nearly unheard of today).

please do not turn this into an upbge flame war.

all you had to say was: “i prefer the look of [name of color profile] better then the linear scale. i think linear looks too saturated and burnt out.”. but no, you turned your opinion into an attack (the way i read it anyway).

but you dont make games with the (up)bge do you? if not, then why are you here? genuine curiosity

last i checked, linear space is recommended by unity, or someone doing a unity tutorial.

i just did some poking around upbge 019, and i was able to set the color management to None.

EDIT: i may have mis-interpreted ace’s response

but you dont make games with the (up)bge do you? if not, then why are you here? genuine curiosity

All I was saying that simply using a basic linear transform in a BGE project (while retaining a similar look) is not that hard to adjust for and your game would look better. I can verify this when I tweaked some old BGE projects of mine to use the linear space. I will also note that unlike ACES (noted below) it also does not break games using an NPR approach.

If UPBGE still has the color management, then that is only a good thing. The time where a different transform can really throw people off is if the engine replaces generic linear or filmic color management with a full ACES transform (which was not received well by Unreal users due to how radical of a change it was and how saturated colors became nearly impossible).

There is no reason for game creators to not use at least a basic color management as seen here (notice how easily things burn out). 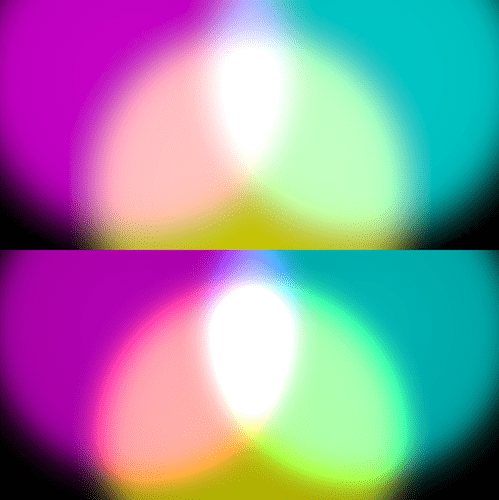 so your saying linear is good? it wouldnt hurt to try and specify more thoroughly. im not entirely sure what that picture is of?

could ACES be easily attached to blenders CM?

apologies for being a bit aggressive.

so your saying linear is good? it wouldnt hurt to try and specify more thoroughly. im not entirely sure what that picture is of?

could ACES be easily attached to blenders CM?

If you want good quality color, then using any type of color management is a good thing.

In the above post, the bottom example of the light circles and the left example with the area light is what you get if you stay in gamma space (as opposed to linear space). Notice the burnt out rings of color in the first comparison and the burnout produced by a low level of light energy in the second.

Also, it would be possible for a developer to have the ACES transform for Blender’s color management as well as for UPBGE, but I will caution that the ACES look is often not desired if you want any kind of look outside of what you see in Hollywood movies.

so to be clear; as far as bge is concerned, setting color management to None is the same as Raw, which i see as Linear.

i think the confusion came from considering linear as a type of color management. which it is. probably bad wording on my part.

so then we agree, linear, non gamma corrected space is better for this case.

So this really works in bge? (upbge). I tried to change this one time… It doesn’t work. oO

some times you have to slide the exposure or reopen blender to get the viewport to refresh.

at one time i tried 0.2.3 and i could have sworn there was a color management option. but i do remember my project insta-crashing or otherwise not working. i guess ill poke around at some more.