Whats the difference between Vulkan and OpenGL versions of UPBGE?

So, UPBGE is getting a Vulkan port. What is the difference between Vulkan and OpenGL versions of UPBGE? And how do they work?

Are M1 Macs capable of running a Vulkan version of UPBGE? I expect they would, but would the Vulkan UPBGE be faster than OpenGL? I know it would break a lot of glsl shaders, but would it also solve the EEVEE slowness issue with armatures?

Since I am on an M1 Mac, I should be able to run it shouldn’t I?
I remember checking at GitHub (I am no developer), and it said no progress was made on it, weird…

Pros: Has minimal GPU driver requirements and can run on most semi-modern devices. Sometimes it requires a computer upgrade though as well e.g. Windows 7 will not be able to run the latest OpenGL versions.
Cons: Slower and less optimized than Vulkan.

In terms of UPBGE 0.3+, since Vulkan uses an entirely different shading language, most shaders are going to break, as GLSL is designed for OpenGL, not Vulkan.

For MacOS, Blender/UPBGE is getting a Metal port. It is more advanced than the vulkan one.

Vulkan beats everything, due to vulkan runs dx 11 and/or 12 making vulkan the better choice.

most shaders are going to break, as GLSL is designed for OpenGL, not Vulkan.

“shaders written in GLSL still can be reused: the source code can be compiled/translated by a standalone compiler into a new intermediate binary format called SPIR-V, which can then be consumed by the Vulkan API.” 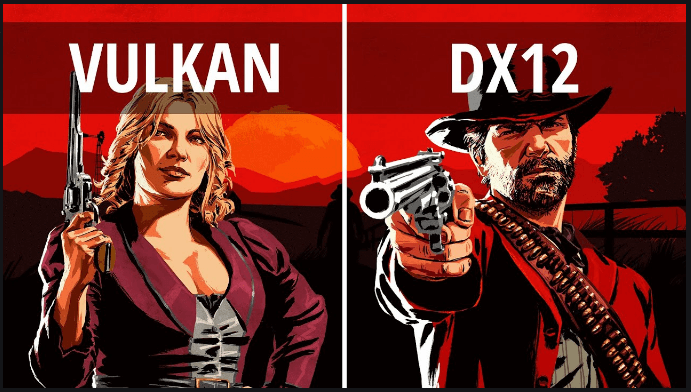 Vulkan vs Dx12 | Which Is Best Suited For You?

We are going to share every piece of information on Vulkan vs Dx12 in this article.

shaders written in GLSL still can be reused:

I never stated they could not, I stated they would break.
But I think you already knew that judging by your wink emoji.

Perhaps you should re-read what I originally wrote.

different shading language, most shaders are going to break …

NO !!! they can be compiled/translated

yes, they won’t be usable , they have to be “repaired”

can you just stop barking at RPanda each time he writes something ? You can bring more information and/or complete his answer without trying each time to state that you are right and that he’s so wrong. Chill

Vulkan in terms of performance and modernity is much, much better than OpenGL. IMO, the shader incompatibility is not a huge problem, because we can translate shaders over + Vulkan has more capabilities.

One of the biggest benefits is cross-compatibility. OpenGL can only run on mobile devices by using the OpenGL-ES version, which is old and stinky and doesn’t have the newer features. The new Vulkan/Metal system will allow for all platforms (hopefully). DirectX is pretty much limited to only Windows.

yes, they won’t be usable , they have to be “repaired”

if it works in opengl, then why does it need to be “repaired” if it isn’t broken? It just needs to be recompiled with a tiny program, no programmer loses sleep over that.

can you just stop barking at RPanda each time he writes something ?

Who says he’s wrong… so wrong even? I never said that, i said not true, and that is true. Benchmarks that those people do are exactly that, worthless data never to be used while gaming. Same if you run Firestrike to see how powerfull your potato is, it’s completely worthless in realtime when you are gaming, it get’s never to the stats you tested, due to not everything in your system gets tested. Same with prime95 test your cpu, cpu here get’s hotter then any game you can play, testing with prime95 can run perfectly stable until you decide to play a game then system crashes over and over.

About vulkan vs dx12 is my personal experience, vulkan is just way better, and dx12 crashes or stutters 7 out of 10 times, while vulkan runs smooth and can be used on linux as well.

But the bigger question is why you bark at me? @RPaladin can talk for himself. And he also figured out that i know, so what is your problem?

Hi guys, please try to keep the discussion more peaceful and not personal. Thanks!

Is the Metal port in UPBGE 0.3.2? I believe the iMacs of today that use metal are trying to translate the openGL into the Metal which causes the slowdowns and occasional crashes…

The metal port is a process that involves several blender releases. Currently in UPBGE 0.33 Alpha is very advanced.