Whats The Easiest Way to make a Net

When I’ve done net-like things I’ve used a pair of array modifiers to make the net-like part… I don’t know if this is the easy way or not!

alright thanks ill give it a try and let you know

This is my table and the net in the middle i need it to be a net i couldnt use the array mod plz help.

I am a noob, but if I had to do such an image, I´d simply create a net texture with an alpha channel for the net “holes” and apply it to the plane.

If you want to use the suggested array method remember to use Constant Offset also so the array copies get distant from each other.

Hope this helps, if not you have to tell specifically what went wrong.

For better results, delete the end caps off the cross-thingy before adding the array modifiers; then set “merge” on your array modifiers. Apply the modifiers one at a time and you’ll end up with a mesh-like thingy in a single object, and you can tweak it however you need (like adding a border or something).

Of course, if you don’t need to model the mesh, I’d go with the previous poster’s suggestion of using an alpha channel. Depends on what you need and the results you want… 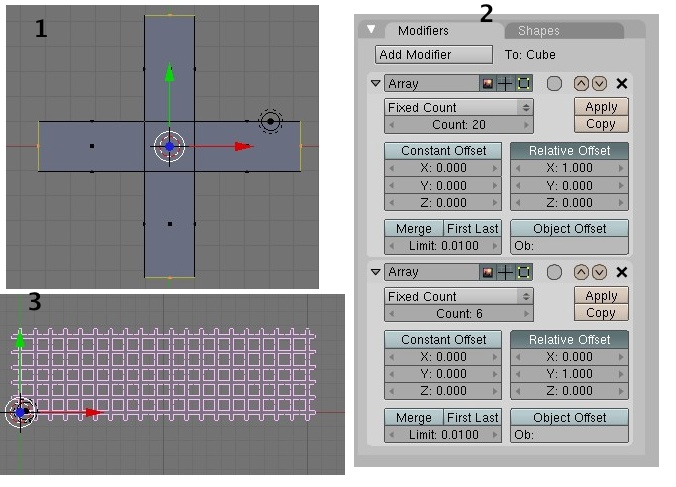 For photorealism, you’ll have to add a white edge along the top.

Cool! Was wondering about how to make a butterfly net.

I’ve used RogerWickes’ method too, and it does make pretty good (and quick) meshes, at least on the static objects I used it on. Does this also work for animations and/or soft body simulations? Does it “look right” when the net moves?

The last mesh thing I did was modeling plastic canvas needlepoint, and I wanted to be able to show a closeup of the mesh with yarn going through it, so I really needed the geometry.

For your ping pong net, I think as long as you don’t want to do a closeup of the ball hitting the net, you’ll probably be fine with a pair of wood textures.

iti: a butterfly net is…looser (has more air) and does not have a 50/50 mix of string and space, so in the Texture buttons you’ll have to click Colors and enable colorband; slide the Cur:1 color (the right one) to the left to compress it and thus make more white space between the lines (oh, and change it to white). while you’re at it you can make the black alpha 1 and the white alpha 0, which shouldn’t hurt either.

then you should, since a butterfly net is a cone, basically, uv unwrap it Reset, and then map the texture not to Orco, but to UV, so that the lines follow the edges of your mesh.

Cant you use animated textures for the ball hitting the net with a displacement map?

Towards the bottom of the page.

hey thanks everyone i think im gonna go with the texture mostly because i have not messed around with them. but i dont have photoshop so i was wondering if someone could hook me up with a simple net texture that would be so awsome thanks NVM im retarted dont reply to this ill figure it out thanks

This is driving me insane i have tried the texture and the array the only thing is that the array did’nt work because of the overhang and the texture i cant get the render to be transparent i think its just me being a noob can someone tell me how to make the texture transparent.

Here’s a quick sample of both techniques; hope it helps!

And the .blend file is here:

I didn’t do a very good job on the transparent texture one; with a little tweaking it would be a lot better. But I don’t have time to tweak it right now…

all you had to do was click the ZTransp button, and play with the texture colorramp and the relative sizes because the net is wider than it is tall. Here is the corrected file http://uploader.polorix.net//files/152/blender/nets.blend Notice that you only need one texture, mapped twice to the same material. 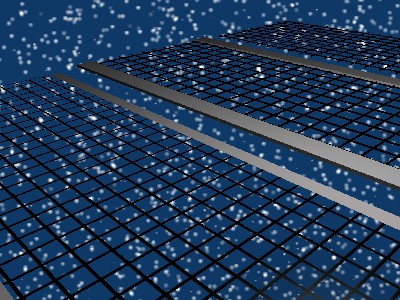 sweet guys thanks again i think i get it now

all you had to do was click the ZTransp button, and play with the texture colorramp and the relative sizes because the net is wider than it is tall. Here is the corrected file http://uploader.polorix.net//files/152/blender/nets.blend Notice that you only need one texture, mapped twice to the same material.

Thanks for the tips! I’m at my non-blender-related day job and couldn’t really take the time to fiddle with it…

I’ve done the color ramp thingy with nodes, too, because somehow I figured out how to use color ramps in nodes before I noticed you could do that without nodes!

I knew that I probably only needed one texture, but when I was first setting things up I thought I might want the horizontal and vertical meshes to be different somehow, so I made two just in case, and didn’t end up making them different.

Dr. Feelgood, please be sure to post your ping-pong table when you get it finished, okay?

Actually, I think the last time I saw a ping pong table up close was probably about twenty years ago! I can’t really remember what the nets are supposed to look like!