Where in the hell did my model disappear to?

Hey Folks,
I’m relatively new to Blender (approx 3 weeks) and I’m having some seriously fuktup problems with the program.
My number one beyotch is this: After setting up and aligning three views of my photo model (front, side, rear), two of the photos just disappear. This leaves only the rear view shot, but the cube is still shown from all directions. I can reboot the program and sometimes only two photos show; while at other times, all three will show. Why in the hell is it doing this?
I am sure of my object viewpoints and that I am correctly displaying them. I was messing around with the program this evening and I think it may have something to do with clicking the middle mouse button/wheel, but I’m not for certain. Has anyone else been thoroughly pissed-off because this has happened to them? How do I fix the problem?
My second beyotch is that sometimes I’ll drag open a split-screen window that seems to multiply like rabbits at Spring time. I can get rid of most of them, but have had two remain like two gray vertical posts that will not go away. I have to reboot to get the viewscreen back to normal. So far this isn’t a really big deal, but I can see it happening when I get further into the project. I figured maybe somebody has experienced this and knows how to get rid of them (and the dragging onto the triangle in the corner is not an option because no triangles or x’s are visible.
My final beyotch isn’t with the program itself. Rather, it is a technique that I viewed on a youTube tutorial where a guy is working with a female form.
I am trying to make the cube taller (longer) to match my model’s shoulder height, but I keep moving the location of the entire cube.
He is using the shortcuts B for box , X-Y-orZ for the desired axis movement, and G for grab. The guy is using “B” to select the top portion of the cube, “Z” to select the Z axis, and using “G” to grab the top of the cube to make it taller. I am trying to replicate his moves, but the guy is so fast, I can’t completely see what he is doing. Does anybody know how to do this? What are the proper series of clicks, drags, etc to use this technique?

Thank you so much for any help and for also letting me vent some serious frustration.

Here’s the crazy thing! I decided to look Blender straight in the eye again and she must’ve blinked because I went www on her ass! My model appears from all three sides AND I can actually use the technique I previously mentioned. I save after every successful move and backup the file asap. WTF!

Disclaimer: These directions only have a guarantee of success which expired 5 minutes ago. Proceed at your own risk and/or peril!

OMG! I opened up Blender again and guess WTF happened? The model isn’t showing, but the edited cube shape is! What the hell is going on with this freaking program?

Do the creators of this Blender know WTF is going on with this crazy-assed program?

I honestly don’t know if I can take using this program anymore. Blender seems extremely unstable. I am using adequate computers both running XP and Windows 7.

Has anybody worked with Daz 3D Max or Maya? I am a student and still have a year’s use remaining for their student version.
I’ve got to have stability and Blender is miserably failing me. :no:

yep, it has to do with clicking the middle mouse button. that’ll change your viewing angle of the object in the viewport (that’s what it’s used for), and when you’re not viewing at an Orthographic Top/Bottom, Side, or Front/Back angle, the background image disappears. it’s supposed to do that. i imagine that’s because you wouldn’t want to accidentally slightly shift the viewing angle while modeling and then continue modeling, thinking you’re still viewing at the right angle because you can still see the image. use Num 5 to toggle between ortho and perspective views, then Num 1, 3, 7, or CTRL+1, CTRL+3, CTRL+7 to switch the viewing angles.

by “gray posts” do you mean the toolbar and the properties menu? press T and N with the cursor in the viewport; what happens? is this what you’re talking about? also, you can right click on the side of a window to join or split windows. i hardly ever use that pull-tab thingy at the top right corner, i find it a nuisance.

are you editing the cube in edit mode or object mode? sounds like you’re in object mode. TAB into edit mode and then continue with the tutorial.

also make sure to read

Hi, welcome to the forums.

For starters, there are several versions of Blender around on the net. Development versions, stable versions, old (2.49) versions and so on. It will help greatly if we know which one you are having issues with. Also, the stability can vary greatly between them.

http://www.blender.org/download/get-blender/ - the recommended ones, which you might be using already.

My second beyotch is that sometimes I’ll drag open a split-screen window that seems to multiply like rabbits at Spring time. I can get rid of most of them, but have had two remain like two gray vertical posts that will not go away
Have you tried hitting the T and N keys? The vertical ‘posts’ in the current version of Blender are meant to contain a bunch of tools and settings. Beyond that, all other viewports should split and join in the same fashion.

My number one beyotch is this: After setting up and aligning three views of my photo model (front, side, rear), two of the photos just disappear. This leaves only the rear view shot, but the cube is still shown from all directions. I can reboot the program and sometimes only two photos show; while at other times, all three will show. Why in the hell is it doing this?
A bit hard for me to follow. Are you setting up three viewport windows with three separate backgrounds? I haven’t used the viewport background feature recently so I can’t think what your problem might be. I don’t doubt you’re having an issue though. If you are creating three planes and assigning textures, that would probably be a different set of issues.

I am trying to make the cube taller (longer) to match my model’s shoulder height, but I keep moving the location of the entire cube.
It seems like you might be trying things in object mode instead of edit mode. Selecting an object and hitting ‘tab’ is how you edit the actual mesh structure. ‘Tab’ again to then move the object around etc in object mode.

Finally, I would recommend these if you have not seen them. http://cgcookie.com/blender/get-started-with-blender/

http://cgcookie.com/blender/2010/08/31/blender-intro-to-modeling/ - this one in particular, as it seems like the area causing you the most grief.

Finally, you might be having stability issues depending on your build. However, it sounds like some of the issues might be getting used to Blender’s workflow. If that is the case, Maya takes some getting used to as well as the other programs. 3ds Max is somewhat more beginner friendly (speaking from personal experience, not case studies) but all 3D applications I’ve tried have different learning curves and stability issues at some point.

Edit (Beaten to it with a more concise post…

Thanks Folks,
I’ll be looking into all of the proposed solutions later today, but I just wanted to express my gratitude to all the responders. I hope these suggestions solve my current Blender woes.

p.s. I am using Blender 2.61 downloaded from Blender.org

still having the same problems.

still having the same problems

still having the same problems.

Does anybody know if one can input Blender files into Daz 3D Studio Max and/or Maya and continue to work on them from there?

Is this what you want? http://wiki.blender.org/index.php/Extensions:2.6/Py/Scripts/Add_Mesh/Planes_from_Images

For going back to either of mentioned, there’s export model as .obj file. Still i believe your background images dissapear due to middle mouse button use.
Depending on user settings, you could have view name on top left corner, see what that says when backgrnd img dissapears.
There’s more how you could keep background image visible despite view rotation changes - use image on Empty. Add Empty and choose Image where dropdown is: 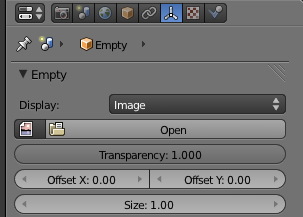 Read what ohsnapitsjoel mentions about tho.

Another - Ctrl-Alt-Q will switch to quad-view where middle mouse button does not rotate view. Shift-Space toggles between maximized-minimized windows.

Ah yes eppo, I thought that was in the official builds, I just wasn’t sure where.

Unfortunately, it is not. I’m looking to export my files OUT of Blender INTO Maya or 3D Max. I’m completely sick of this program.