I don’t know if this is spooky or cool. At any rate, this is a picture of Obama’s inoguration. So what is so cool about that? Well, double click into the crowd some where, wait for the focus to adjust and then do it again and perhaps again. It is just amazing technology if you ask me. :eyebrowlift: 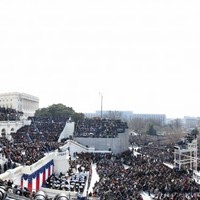 I just checked that out, it’s EPIC…although, using makes me feel like a creeper. Just getting close ups of individual peoples faces…

interessting, a Little bit more details and you can read the security’s identification badges. … does the audience sitting in the back see the spectacle with that details as well ;)?

Gigapixel images are quite interesting to look at. I have not seen this one. It is done very well though if you look close you can still see some seams were the guy stitched his pictures together. These pictures take a lot of work to make as they are usually composed of thousands of high zoom pictures that have been merged together.

awesome this is epic awesomeness i want one