which should i export as? 3Ds? obj?

i am building an aquaduct.
as all the arches are the same i thought i would build one then export it.
on the next file i would import it and array it.
sorta worked but some of the stones became odd! there are no images used. just colours and stucci etc.
so what should i export it as?
thanks 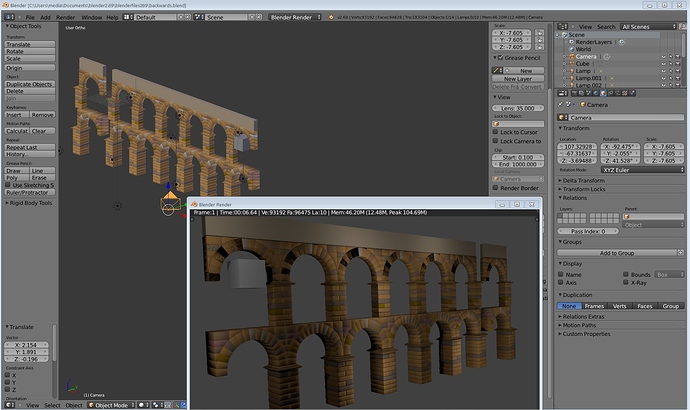 Seems like an awfully round about way to do things.

You can simply move your model arch to another layer, then do the array in the layer you intend to render.

You can save the blend file the model arch is in, open a new blend file, and append or link to the model in the old file.

I see no need to export and import to accomplish what you want to do.

i still need to do this.
it is a small part of a massive project.
as i want the individual rocks to stay separate because when i join them the effects are not satisfactory.
so this way i can bring them in and array them. and still change a few rocks to break up the monotony of the complete thing

.obj does not have the same poly count limit a as .3ds format and does not triangulate the mesh so just for mesh object should be a simple format to use.

If you want to bring in an object from one blend to another there is no need to export as another form to bring back into your blend file. As said previously just append, then you have no loss of materials, procedural textures & modifiers etc which you would if you export as another file format

i would apended HUNDREDS of rocks! so finding things could be difficult on that panel that lists them.
obj it is!
thanks

of course you could always delete everything you dont need in the scene. move the object you want to keep onto a new layer, then on the previous layer, select all x delete, Then SAVE AS NEW BLEND FILE!!
this way you have already the mesh you need in a file will all textures etc without the bother of importing or exporting

i would apended HUNDREDS of rocks! so finding things could be difficult on that panel that lists them.
obj it is!
thanks

Then group them and append the group. Sheesh. Do we have to tell you everything?