I would love to be able to use both pole targets and IK bone stiffness on the same chain. I’m not sure why they would be mutually exclusive to each other but when I add a pole target the stiffness stops working.

Am I doing it wrong or are there work arounds to get both?

Seems to work with me (blender 2.75).
Did you set the stiffness for the wright bone axis? 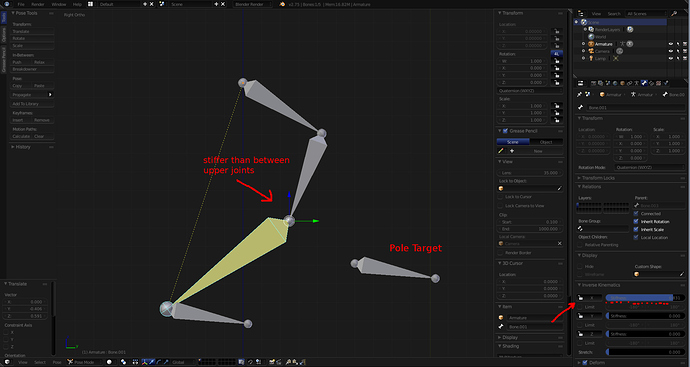 thanks for taking a look, I think you’re right. Maybe it’s the limits that don’t work but the stiffness is ok, how do the limits work for you with a pole target?

I tried the same setting with giving the x rotation some limits on both middle and lower bone (the yellow one). This seemed to work either. Since the lower bone has some stiffness, it reaches the rotation limit after the middle bone. Seems logical to me.
But I have to say that I didn’t test the rig in lets say a walk cycle or some longer animation where foot and target are keyed all over the place…

Thanks again for testing.

I made an example file, with the limits breaking when a pole target applied, what do you think? Should I file a bug?

and here is a gif of it in action

This an issue with the root bone of an IK chain when a pole target is used. IK panel locks and limits on the other bones should work fine (to a certain extent at least). See all the way at the bottom of this page in new manual (copy from earlier versions of wiki):
https://www.blender.org/manual/rigging/posing/inverse_kinematics.html#bone-ik-panel

I don’t know if limits should be going wonky on the root bone too but they do as you have seen. That’s the way it’s been forever. It not being mentioned in the wiki means nothing. I figure that’s how it works and not a bug (some gnarly math goes on behind that IK stuff). Or it is a bug on todo list and/or waiting for armature code upgrade. It may just be something nobody bothered to report. File a bug report and you’ll find out for sure.

Hips (if that’s what these are) are usually not part of the IK legs in the typical Blender biped character rig. Usually the “hips” are one control bone on bottom of spine which both upper legs are parented (not connected) to. This IK root bone issue may be one reason why that is so.

There is an alternative to the pole target. A control bone at top of upper leg which turns the leg. Or simply rotating the upper IK leg bone itself. That’s no help in this case. Not with the hips being part of the IK chain.

Edit: Stiffness… limits… maybe I’m mixed up here. I know better than to post after only scanning the thread but I did. I hope this post helps anyway.

Thank you for the long reply Larry, it was my mistake to mention stiffness as like Motimo pointed out the problem is the limits.

I agree the example files look like legs and hips but the place I wanted to use it was on the clavicle (mixed with max stiffness) so I could animate the arm normally but have extra extension when I needed it without going outside the natural bone limits creating impossible deformations. It was for a small monster so would rather go for speed than accuracy while animating.

Anyway with you’re new information about it being on the root I found the bug https://developer.blender.org/T28313 , where they say it’s a limitation of the implementation and not a bug. Bit of a pity but oh well, at least I know not to try it anymore

thanks again Motimo and Larry

I should’ve known to search the release logs for info on this issue a long time ago. I’ve only been referencing the incomplete info in that wiki/manual page for a long time now. Thanks for searching out and linking to the bug report. I’ll include that in future threads.

The page linked to in the bug report now resides here. Wiki “release notes” page links back to 2.57a but the original “release logs” page goes back to 2.30. Nevermind the menu bar at top of that page. Scroll down for links to the bronze age of Blender.

The release logs/notes are a valuable resource. There’s documentation and links there not found anywhere else and makes for a good read too.