Edit: Sidenote: WHY is there so few tutorials on procedural (node-based) blender brushes? I want to use that in conjunction with the above method for more precise work, albeit destructive and finite in resolution.

So far I made two node setups for this, one for freckles, another for weird painterly patterns. I would want there to be a big library of these node setups for all kinds of things.

I believe there’s also a way to use this to smooth out one’s linework, like drawing vectors(?). 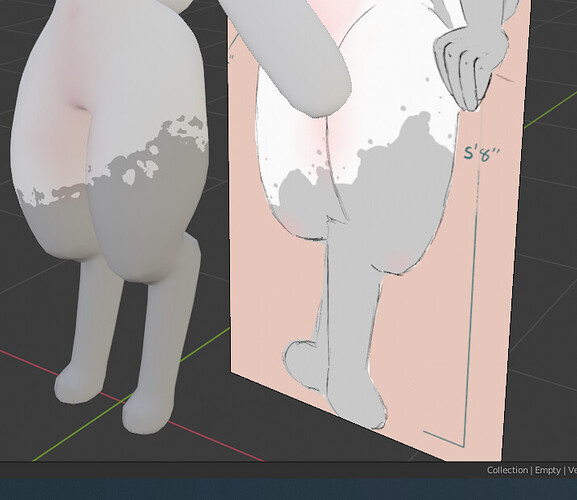 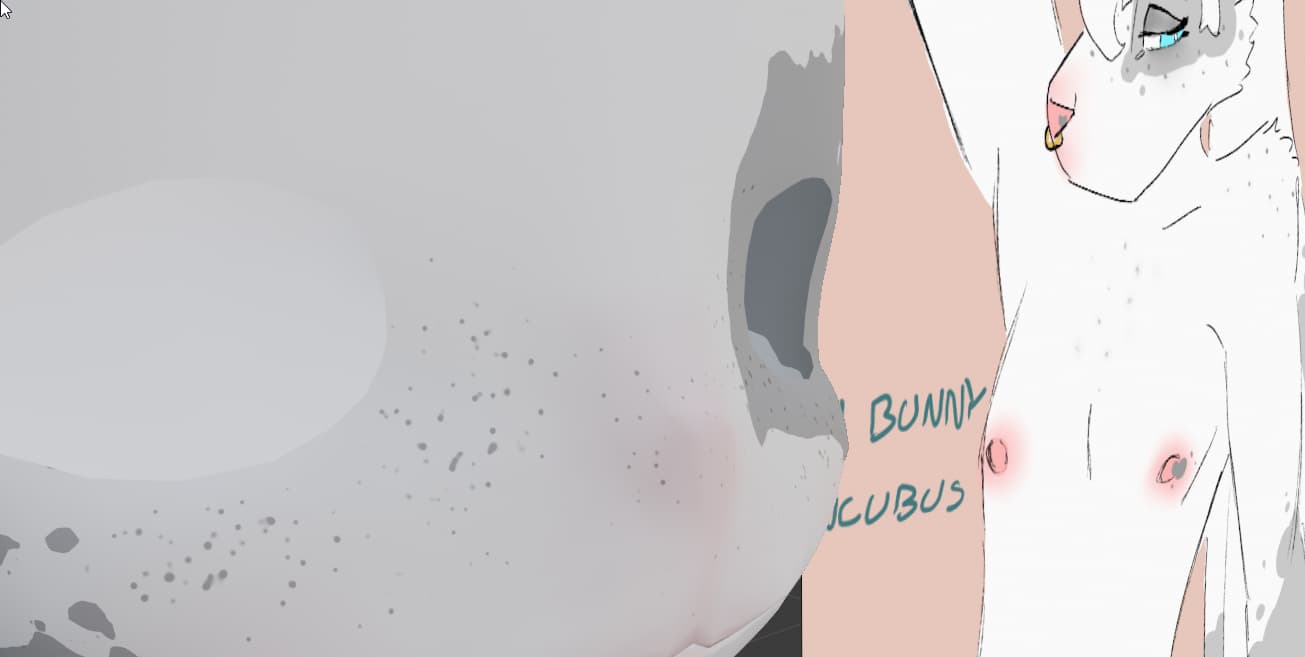 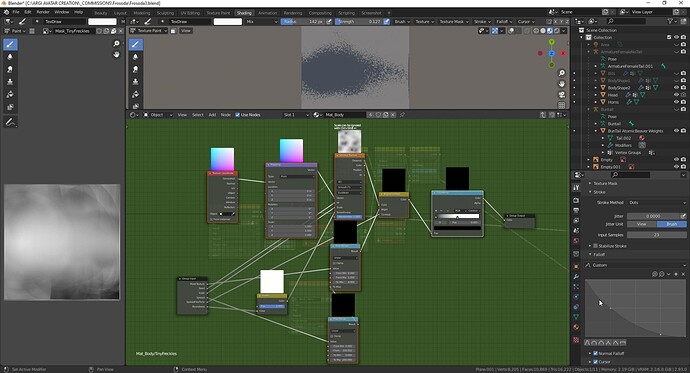 I am totally unfamiliar with node based proceedural brushes. Could you explain what this is? Maybe you’ve discovered a new technique.

I’ve often wondered if it would be possible to use vector drawings in texturing.

After much youtube searching this is the only video I can find that is useful on this topic, and it is amazingly useful. Holy crap that’s some good stitching for clothing.

In terms of another example, check out the video I made in this thread.

Wave texture with a gradient for distortion? Materials and Textures

I stumbled upon this while trying to get the distortion pattern. mesmerize.blend (816.8 KB) (hit play on the animator to see the animation)

The animation is guided by a mask, which is blurred black dots. If I was to place one or multiple blurred dots, the propagation wave will center around each dot seamlessly. 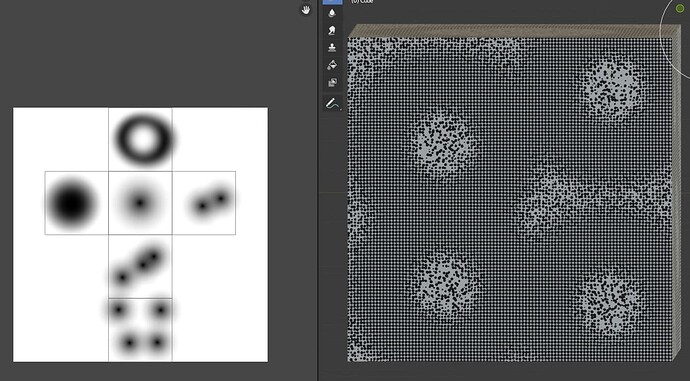 I remember seeing a video where someone painted a mask to control the z location of a wave texture to paint knots on a procedural wood texture. Basically he was painting dots that lifted the Z mapping to create the knots.
I had a look for it and can not find it (it was pre 2.8 but the theory still works. If I find it again I will post link to it.
I found a similar one:

Edit:
I have had a play with this method and it has certainly many possibilities.

This is one I did with a really sloppy mask (painted with texture paint) to control a voronoi texture. 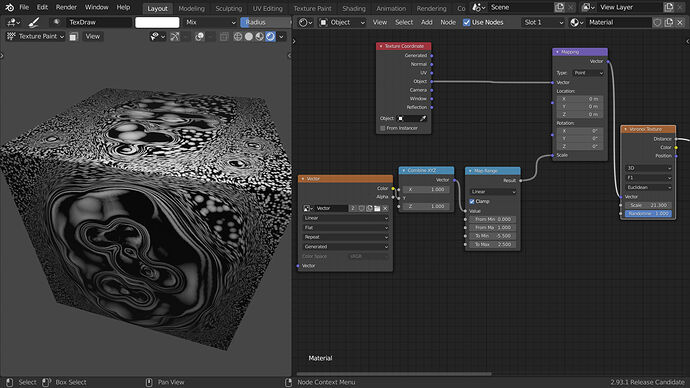 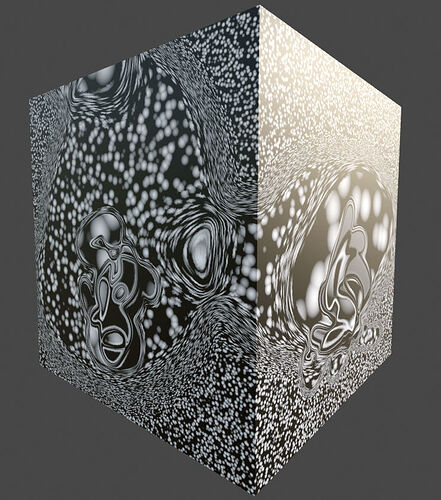 I used the map range node to turn the 0-1 black and white values to larger ones.

I can certainly see a lot of fun coming from this and will do more!

Edit:
Of course I could not resist animating the map range node!

I believe Blender has enough feature to compete equally with Substance and Mari tools. Yet 3D artists uses Substance Painter and Designer like it is the only tool avaiable. I’m not into texturing, but someone could show Blender texturing capabilities at it’s maximum performance. If you see any videos or artwork, in a feature film or AAA game level, please share. There’s this channel Artruism Digital, a woman that teaches/show Substance/Mari workflow, I also wonder if could be done in Blender at same quality.

I believe Blender has enough feature to compete equally with Substance and Mari tools.

This is not true.

Blender gives you a basic set of tools that you have to know well to get the most out of them.

For procedural textures blender can do a lot, especially if you like maths, I have seen some crazy node setups that look like a motherboard!

There is lots of room for improvement though, new texture nodes like different noise patterns and a large etc.

I think that substance designer/painter has more preset building blocks to make things easier for artists.

I do not know substance personally but from what I have seen it is far ahead in many areas, there are loads of built in patterns for wood, stamped metal, grunge, scratches etc that are very simple to apply. Also easy to use texture layers etc that can be done with blender nodes but things do get more complicated!

You can do a lot with blender and a good texture/brush library but they are not built in.

There is a good reason that many people use blender for modelling and pay to use substance for texturing.

There is lots of room for improvement though, new texture nodes like different noise patterns and a large etc.

Some improvements have been added by Charlie lately with regards to procedural textures.

I created a thread in case anyone wanted to have a play and post results - keep everything together.

Doesn’t seem to have generated any interest at all - which is a shame.

Just in case people hadn’t spotted it, there is a new set of procedural texture features coming to Cycles based on signed distance fields. At the moment they are in their own build for testing purposes, but they have the potential to open up a whole new raft of possibilities when it comes to procedural texturing. I made some posts over on the Cycles Development thread - but thought a dedicated thread in the Materials section may be a better way to go, save clogging up the Cycles development th…

Here is a link to the build that contains these improvements:

I agree that Blender could do with more procedural textures and tools, however if this stuff is added and the community doesn’t get excited about it and doesn’t play with it - it doesn’t really send a message to the devs that such tools are genuinely desired or needed (and maybe they aren’t

Charlie has done some great work on this (and has other stuff coming down the pipeline), yet I haven’t seen anybody else try his stuff out yet.

This is super clever, never thought of it ! Thanks for the tip !

Dang! I did not spot that one I will certainly take a look, I love playing with texture nodes

Not sure if it is “clever” but it is great fun! You could drive all kind of things with painted masks – or even image sequences