Why models should be seamless?

Hello there, i want to ask wery noobish question
Is there any reason to keep meshes not separated, but merged (seamless)? Here’s image with example 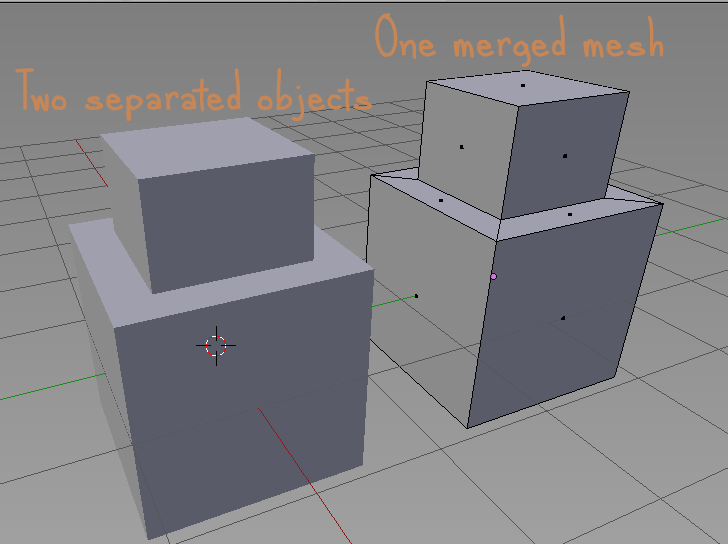 I know that merging meshes allowing to make a bevel between them, but is there any other, more significant profit?

It all depends on what you’re planning on doing with the model. If it’s just to be a still image… or animated as a complete solid object without deformation, then intersecting geometry isn’t that big of a deal. But if you plan on animating or 3D printing or applying further modifiers to the whole unit, then it makes more sense to do it without intersecting geometry.

Ok, so, let’s say I’m doing a gun (which is 100% solid thing), for game, in this case I could just leave all objects just combined, not merged, but could be there any kinds of deformations like shading or smoothing? And what do you mean under intersection? Just want to clarify it, because almost in every discussion people mean different things when mentioning it

if it is for Game then it uses only
UV images and might need to use some Seams !

But in any case I’ll have to mark seams

depends on object
if it is only a plane no seam

but other 3d objects would require some seams!

There are three ways you could construct a model in Blender:

Animated deformations on a mesh mean moving vertices so it describes a new form.

Intersecting geometry means either separate objects or separate mesh parts that have surfaces going through each other, but aren’t connected so that they stay as two separate surfaces.

In 3D printing it means that each part has to be manifold, and since surface thickness is 0, two clearly intersecting parts can describe one solid. Not all slicing softwares can interpret those though. If it can (like Slic3r), it can be a beneficial, because you don’t necessarily have to connect the geometry which makes constructing and refining the parts easier, which often need to be high resolution as only real geometry is interpreted. On the other hand, if you want to describe a hollow model, that becomes a problem because there are multiple surfaces describing one solid instead of just one. When it’s just one surface, it only needs another parallel surface to describe the solid casing in a hollow model.

With deformations you likely need to connect the geometry because as they’re deformed, the two parts tend to get separated, which looks bad when a surface is supposed to look like one connected one, or something needs to stay inside a form.

Self-intersections would be bad. Those are connected surfaces that go through themselves. Like folding a paper so it goes through itself, but without making any cuts. Can’t have that.

There’s no such thing as UV images or UV textures. There are UV maps, which contain 2D representation of 3D coordinates and go with the mesh data. Images are images, but images that are made to control specific material properties are called texture maps. Each are often named to tell which one it controls.