We have in Blender a very powerful tool for accurate reconstructions of history. Many of our great statesmen, leaders, innovators and artists are poorly illustrated or inaccurately represented in contemporary styles. With the current versions of MakeHuman and LuxRender, we Blender amateur artists have an opportunity to bring these great persons to life and add more interest to their stories. A perfect example is William Shakespeare (1564 - 1616) English actor, playwright and poet.

There is probably only one reliable image of Shakespeare, even though there are claims to other likenesses: a monument in Stratford, many controversial portraits and even a “death mask”. A sensible, logical decision is to accept the ubiquitous etching by Martin Droeshout the Elder as the true representation of Shakespeare and this leads to the following features to be included in the model-

Hair will be created as mesh, particles-to-mesh and cylindrical strands.
Each eye to be made from six separate parts.
Eyebrows and eyelashes cylindrical meshes.
Clothes will be duplicated from body mesh and modelled.

The first stage involved adjustments of the default male figure in MakeHuman to give a basic likeness of our hero. The available controls are getting easier and more powerful with each daily update of MH. The model was easily exported into Blender with the new facility and it was imported at a scale of 0.1 into Blender. Previous transfers showed that this scale gives a model which was similar in size to other artists’ models. More accurate modelling of Shakespeare’s physiognomy is currently being carried out in Blender - a vertex at a time. We’ll see how it goes … 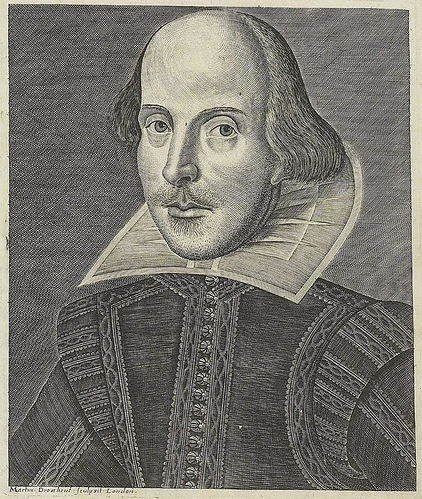 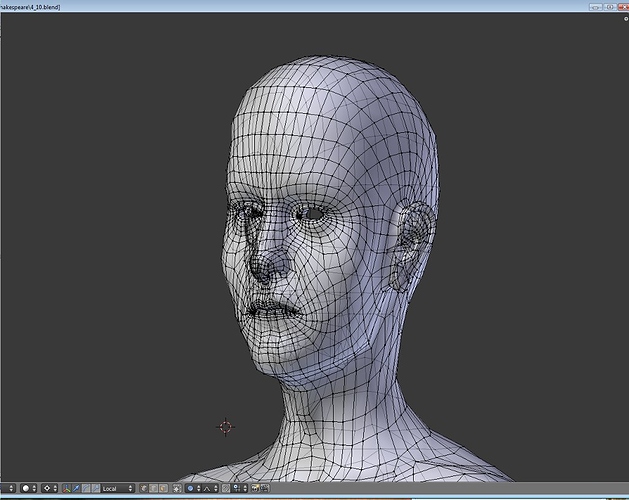 i’d like to follow you if you give enough details and i’ll try to do Leonardo if possible
don’t know if i can get it right!

Reasonable progress has been made modelling eyes, hair, eyebrows, clothing. A major proportion of the time has been spent on manipulating vertices on the head - one by one - to get an exact replica of the famous etching. This is probably the most important part of the project and getting accuracy here will make all the difference.

All the planned stages have been worked on at least once and the model is slowly developing in most areas. No tricks or shortcuts are envisaged and its all down to steady work. Brief test renders are not worth posting at this stage. 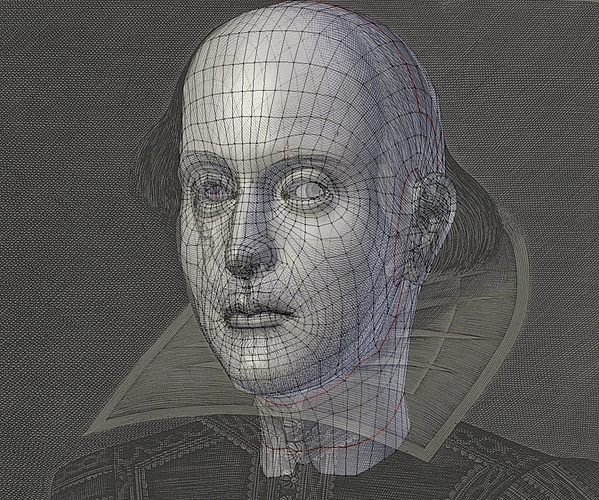 Your model is looking good. Good topology so far. You will be able to accurately match the drawing of Shakespeare. As to what he really looked like – the etching is probably close but remember that the artist probably took some artistic license.

Leonardo da Vinci would be a definite challenge. There are only a few drawn images of da Vinci I know of and I suspect they are not very accurate – embellished in many ways. Compare how da Vinci drew human anatomy and how it looks drawn in accurate medical textbooks. He added his own artistic flair to his drawings.

what compromise ?
i assume you add subsurf level 1 or 2 max
then adjusts loops

when you make the basic head’s mesh
you need right proportions which if you don’t have the side and front view makes it more difficult!

how much details do you include before going to the Sculpt tool!

i began the head with subsurf and i rotated it so that i could see like in the pic
but not easy to work with !

i used one of the pic on the internet to model after
it’s a known picture but is it the right one don’t know
never met him before ! LOL 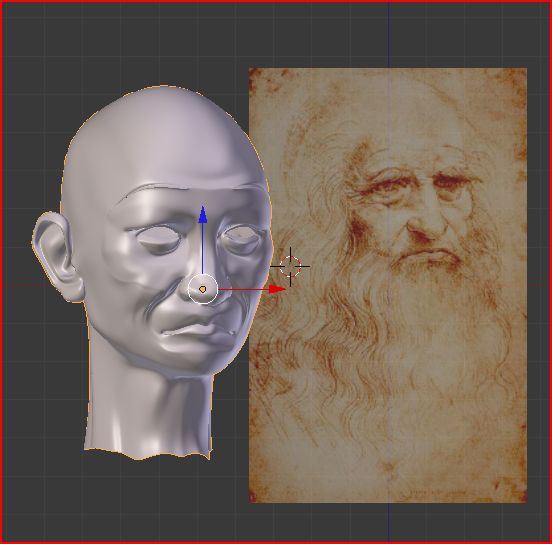 what color do you pick for the skin ?
yellowish or more natural skin color ! 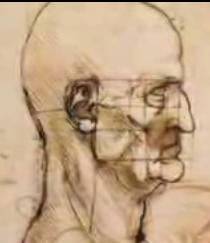 Happy blending!
Sorry, that would go for Leonardo of course!

well i can always do 2 models one like the pic’s color yellowish and one with a more natural skin tone!

but not easy this one cause he had such long hair like a 60’s punk with different shapes so have to use more then one particules system to get a more realist look!

if i had met him i would have told the punk to get a hair cut !LOL

Some has been progress made on modelling and texture mapping. Facial features have been modified a little to get a more exact likeness but there are still more adjustments to be made. The mesh has been subdivided to give more detail - and obviously creates more difficulty in modelling. Single strands of hair have been added and more will be added later. Moustache, beard and stubble have been created using the particle system and converting to mesh, extruding and duplicating. Eyebrows and eyelashes were extended.
Main effort is concentrating on texture and render settings which are slow to develop because of the extremely long rendering times - necessary if one wants to use an unbiased renderer. The image is rather rough even after 5.3 hours rendering by four processors. Lots more to do … 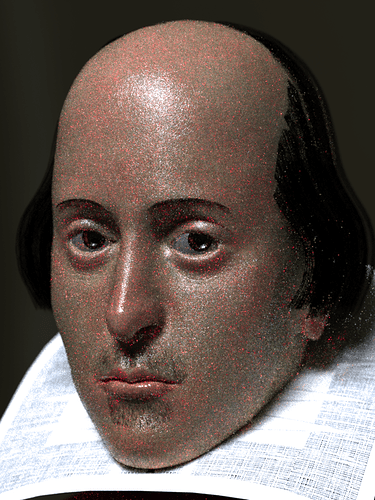 A limited amount of work has been carried out this past month - Christmas activities had priority but mainly because the motherboard on the PC failed and had to be replaced. Some modelling on the eyes and eyesockets, chin and improvements to hair textures and facial hair. Direct lighting was employed for a while to try and speed up rendering - surprisingly the replacement motherboard now seems to do twice the work in half the time. Probably the speed-up is because the harddisk was reformatted and partitioned to keep Vista away from busy applications. 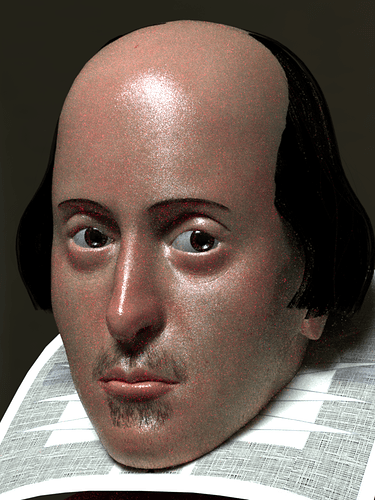 Slow progress this period, only ten hours spent on the portrait. Anyway, some improvements were made - however small.

Additions were made to bumps and creases on the face and also some additions to texture layers. Minor modelling changes and lighting. Rendering starts to heat the four processors so testing is deliberately limited to avoid another hardware failure.

Further improvements need to be made to hair, cloth creases, lower eyelashes, facial hair, skin texture layers - just about everything needs another round of addition and tweaking (the classic asymptotic curve of perfection). 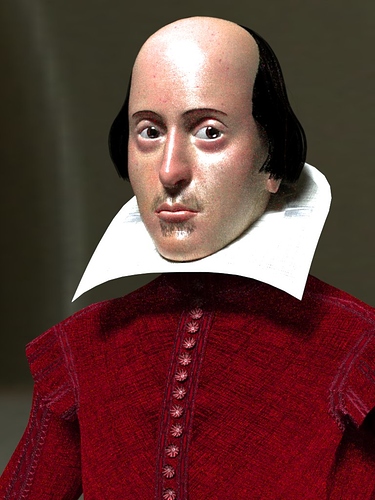