So I’m working on a photorealistic Wine Bottle Id like some advice on. It’s looking good so far and im working on the label texture. Trouble is i cant seem to get the shader for it right, the label seems a bit washed out and its not really getting any reflections. Its supposed to be matte paper with the whale as spot UV printed in (in other words the printed parts are shiny) i’ve tried giving it a specular map but it doesn’t seem to help. Any ideas?

The shader is based on the Chocofur recommendations for glass shaders, with a second UV map for the label which is mixed with the glass shader (picture of the node setup below).

Anyone know how i can improve it? 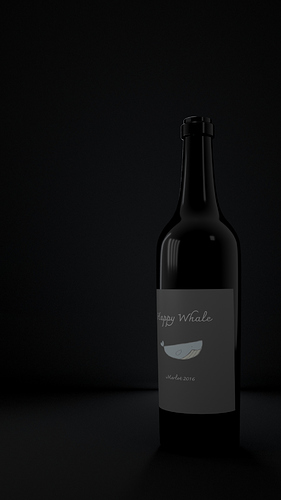 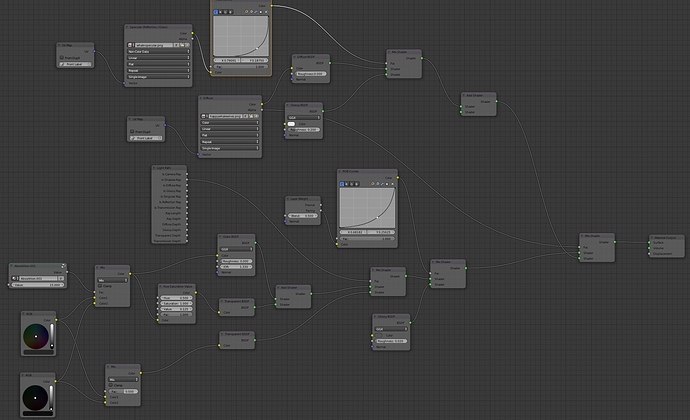 So i managed to tweak the shader, turns out two of the nodes were round the wrong way… trying it in a more natural back ground so i can get the wine shader and wine glass looking right, which is proving a challenge. 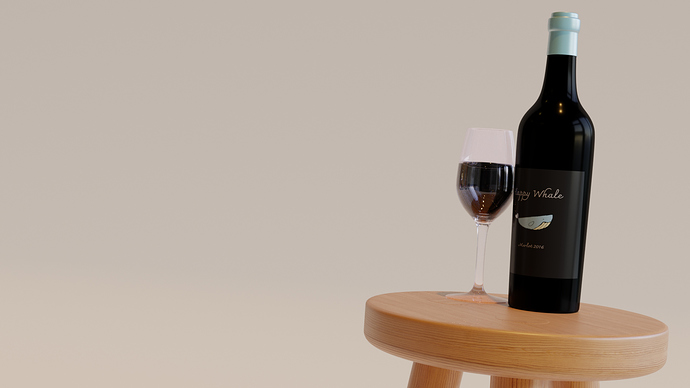 Get rid of all those wild nodes for the glass, and just replace it with either a single glass shader, or a principled shader with the transmission set to 1. Something is not right with things, can you post a screenshot of the viewport (opengl) shading?

That glass shader is awesome, I’d make it greener, lots of wine bottles have a green tint. dont change it much it looks awesome

The biggest thing that it needs right now is just more work on lighting. I’d use an HDRI, because they provide awesome lighting as well as detailed reflections

It looks like a wine bottle, no? Imo it’s pretty awesome. Your right, it doesn’t look like glass. But should it?

Thanks for the comments, although my heart sank when you said it didn’t look remotely like glass

I am aiming for photo realism, so I do want to get it right.

The glass shader is pretty much the one described by Chocofur in this great guide. I added a second UV map for the label, and mixed the label shader with the glass shader… that’s why the nodes look crazy. It’s using Filmic Blender rather then the default sRGB.

Does the wine bottle have thickness, and are the normals correct? You have changed the viewport colors so dark that I can’t tell if the normals are inverted. I’m just recommending you use a simple shader until other things are fixed.

@Photox Yes, both the bottle and the glass have thickness. They were both box modelled by hand by extruding / scaling faces. heres the normals… 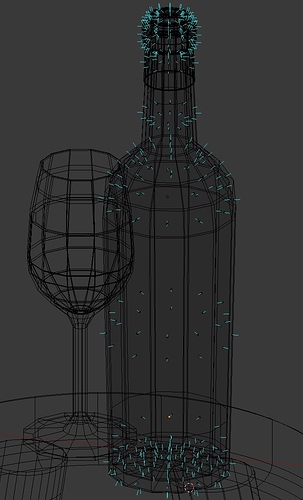 How large is the wine glass in Blender units? It should be somewhere around .25 meters.

Something is off with the wine bottle shader, start with just the principled shader with transmission at 1. If you want absorption, add a volume absoption shader and tire it into the volume into put at the last material output node. The thing is that that chocofur shader (they’re all pretty awesome) but it doesn’t really look like glass to me, more like plexiglass/amber.

The wine glass (minus the wine) looks about right with the refraction at the base.

The wine however is way off, there are super sharp reflections on those faces in the middle facing the camera, which should be far more transparent. It could easily be caused by flipped normals on the glass or the wine itself. there’s a weird workflow for wine inside a glass where by you do not model a manifold obejct, but instead have a separate ‘cap’ that is the maniscus, and then the flat top of the wine. greg zaal answer all your questions about that

lastly, the defining characteristic of glass/wine etc… is the refraction. and to bring out the refraction you need objects/patterns behind the glasses. this could be the edge of a table, the frame of a painting, or the wall being it has a pattern. SImpler is better, so that what we know to be a straight object gets warped and refracted.

ALso, and this is important, do not clamp! look into branched path tracing.

Cool, thanks for the tips @Photox. The clamp settings have always been set to zero. I had another stab at the glass. So i feel daft for wasting a couple of hours getting my head around the Chocofur setup, and your right i guess, it is more like a plastic glass.

Soooo… I did a bit more googling and came up with this render. The glass on the right is literally principled shader, with the transmission at 1 and just a very tiny bit of roughness. The glass on the left uses the Remington Graphics PBR shader. Which I had found that a couple of days ago! I think this looks the best.

Thanks for the tip about branched path rendering - ive swtiched to that, and although I dont fully inderstand it, It does seem to have made a difference and sped the render up a fair bit. 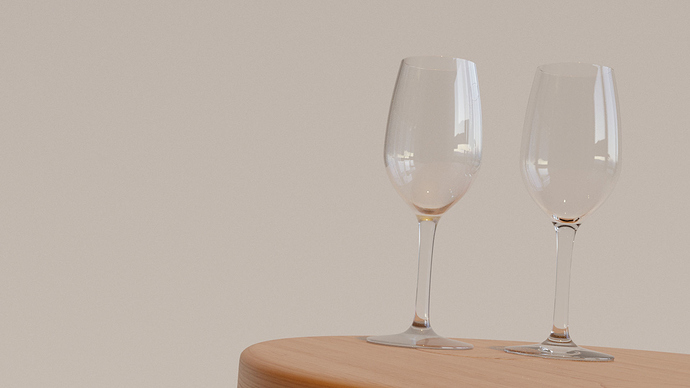 Definitely better, don’t forget to put something (a thin darker cyclinder for testing) a little bit behind the glasses. Glass objects/shaders are much more about the environment around them than their nodes. Stop for ten minutes and just add some objects behind the glass, some close some far, simple straight geometry is fine.

Attack of the monkey heads… 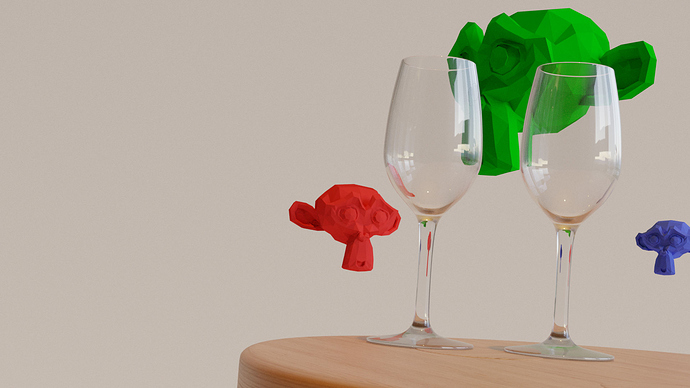 They must be behind the glass as viewed from the camera! no monkey heads.

Just put a think dark cylinder behind it, smooth shaded and a principled shader.

Well ok but Suzanne is upset about it… 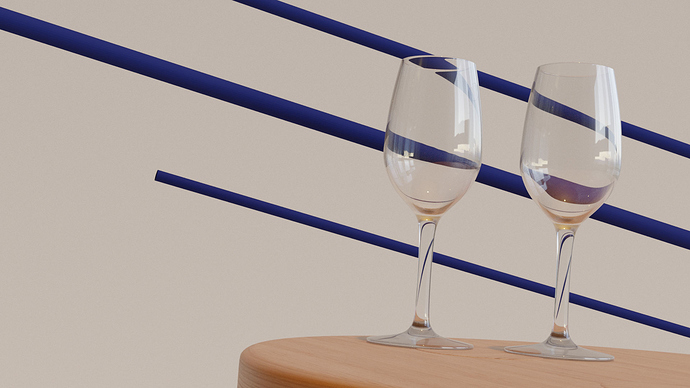 Better! For true realism you need a full scene in and around your object of interest. One of the secrets to goo d renders is just having enough stuff. The rookie mistake in many renders is that it looks ‘set up’ which usually means that there are no objects around that support the main object.

Well im not quite a rookie… In a previous life I was an animator and modeller, but never really got into lighting and texturing beyond the theory. I know you need a scene to make things like glass look good.

Progress I think… but the wine seems to shiny, to perfect. i set it up as per the article you shared, using seperate surfaces for the wine top, glass, and the wine in the glass. 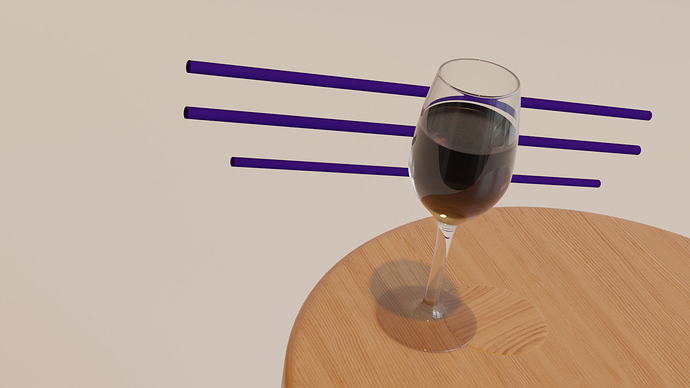 No I was just saying in general that it’s a mistake to make a simple scene and expect realism. Ideally you want another object nearby that has some gloss to it, so that the rays really start pinballing off the glass, to another glass, and back.

Something’s not right with the wine. Hard to say, if you want to post a packed blend, we can have a look.

Sure, here you go… https://drive.google.com/open?id=1GpjNyjUDs2Edka0E4FC5E5ss5U8ve-yx

Thanks for all your help so far.