Yeah, I tried it on more smooth / higher res Geo, and it worked better for sure!

I need to keep messing with it more.

in fact,your add-on is quite cool. If i could give you some advise,it is that there were many similar add-on or plug to do the fusion,but no one focus on the quad polygon and good topology! If there were plug to form regular good topology and maintain the curvature like the shrinkwrap modifier. I think that would be better. Good add-on

Jason Kurama… tools that make such fusions are not so many as you say. There are still only two, in fact, that do such things: Mesh Fusion of Modo (which can not be considered a plugin anymore but a native tool of the whole app) and Hard Mesh. Achieving such fusions in a satisfactory degree (that’s to say having the opportunity to make filleting kinds of a wide variety, as to their thickness and form and in a multitude of boolean scenarios) is not an easy thing. So, the best thing to do is to have a good auto-retopo tool and retopologize the objects afterwards.

The most needed thing for ‘bevel after boolean’ is finding a way to produce filletings in a much more wide variety of cases. Ilya had some experimentations recently but as he said would not be able to answer for a while. Hope that we will see him again here! It would be a pity for such a plugin to remain abandoned!

Fatesailor
Hope that we will see him again here! It would be a pity for such a plugin to remain abandoned!

I will try not to leave this plugin.

Happy to hear this Ilya!

It is a very promising tool. I still am experimenting with it very often… it has a very significant potential to offer a whole unique modeling way by itself.

Mostly it is a matter of finding a way to overcome its present restrictions. Your most recent experimentations were very promising, hope that the solutions will be found! Whatever news you have inform us here, so that we may be able to give feedback.

Any more updates/progress on this? Or change to look more into it?

I’ve been using I think 0.9 Version, and is pretty good! Sometimes I’ve had to invert/flip the normals inside the boolean for some reason, or do some other fixups. But usually it’s pretty good so far!

At the moment I can not think of a normal algorithm

The fixing of the normals is not a so difficult thing. It can be managed in an easy way manually. The priority is to find a way to develop further the beveling abilities of the tool (to make it produce much more wide bevels for example).

Ilya what is going on with your latest experiments regarding the inset cuts? Did you find a way to achieve something with them?

Under the normal algorithm, I meant the working algorithm.
Sorry for incorrect translation.

Ilya I think that you can add, to the already existing add-on options a ‘cut’ button which will make an offset cut leaving also the seam curve (as is in some images that you did post some time before… I am putting the link below). This can be an option that the user can act, after the cut, manually… he can turn the curve to a poly line, bridge it with the cut loops and then make a bevel (maybe with some smoothing-ironing after the process). This can be a way of achieving much thicker bevels (and even in ‘difficult’ areas of a mesh).

The needed thing is to have automatized the right offset cut and the seam curve… then things can be managed -to some degree at least- manually. What do you thing about such a solution?

Btw, a new finding as to the possible uses of the add-on… you make cuts from the loops of the boolean seams and then you give some thickness to the object using the ‘solidify’ modifier of Blender: 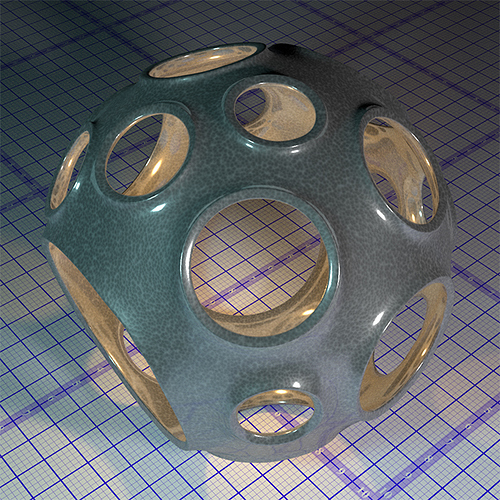 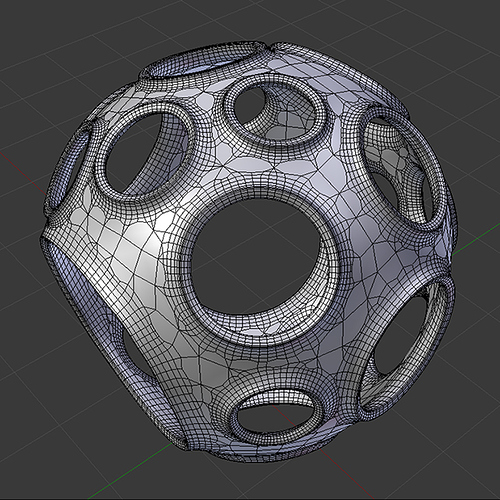 Little progress. Works so far only with UNION.
Both Bevels are made automatically.
I’m not sure about stability. Do you mean manually making guides for the cut?

Excellent progress Ilya! Even if it is only for the union operation!

Now as to the possible solution I mentioned: yes I did mean just making the cuts with the add-on and then leaving the remaining work to the user. Because as far as I do see it is possible to make wide cuts (offsets) but it is difficult to automatize the whole process of producing bevels on so wide cuts.

Using 0.0.1.2 I encountered that error which show up if you touch any of the parameters, so I can’t modify the bevel size and other things. 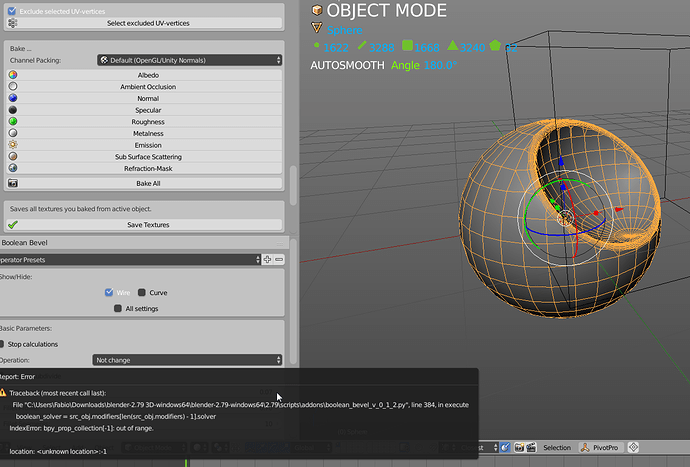 Try before using the add-on to deselect everything and select only the desired object.

As far as I see you have used a sphere primitive. And its pole area have touched the bevel area. This is something that has to be avoided. Also, It is preferable to use a sphere made of a cube instead of a sphere primitive. Having objects with as much as possible evenly distributed polygons on them is best.

And, have a look in my tutorial videos, they can be helpful. There are some details that the user have to be aware when working with the add-on… so it is good to learn about them.

I’v made two sphere from a cube, then selected the target (boolean-ed) object only yet still gives same error. No problem on a fresh blender installation: at first it works, but as I said after some period of time it start to freak out even if I use it as first step of a new project.

EDIT- seems like the error was the solver: I need to select ‘carve’ instead of ‘bmesh’. A curious oddity: undoing the boolean bevel and re-selecting bmesh instead of carve, then clicking to bevel boolean again it will produce working parameters. So it seems like the addon get somewhat confused, as if it can auto-select carve instead of bmesh but not at first try?

Btw, which version do you use? I do strongly recommend that you use the 0.9 version. It is the best working one.

Didn’t carve get removed as a solver option? If this version of the addon has that as a option, it might be the reason for the error.