Thanks @Rodinkov_Ilya for developing this awesome addon for Blender!
I’ve been trying it in Blender 2.79 with some good results (BAB 0.2.3).

But recently I’ve switched to Blender 2.8 and de addon (from BAB 0.2.8.2 to 0.3) don’t seem to work with large objects and large bevel cut radius (I have to use blender internal units and not meters due to pipeline requirements). Here you have screen captures of the issue:

The object size is 100 units in the first scene and 10 units in the second one, and the bevel cut radius is changed accordingly from 10 to 1 unit: 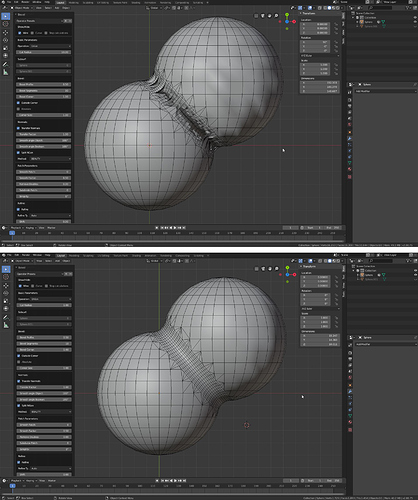 In Blender 2.79 the addon works as expected with large cut radius: 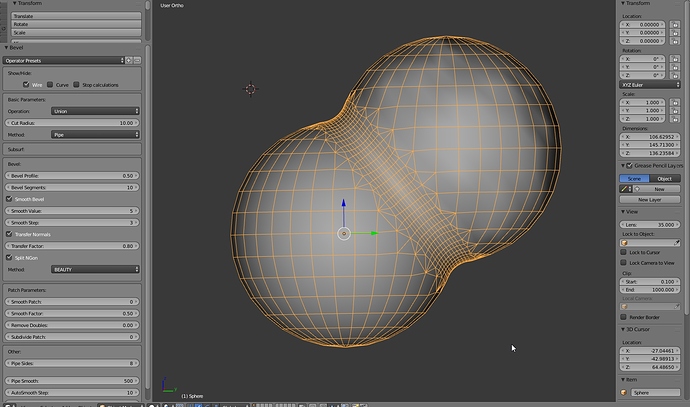 Is it something related to Blender 2.8 or is something that can be fixed within de BAB addon?

Ok. Thank you for the answer.
I think that your add-on could be very use useful for making high poly meshes for baking very fast. The only thing that stops me from using it like that right now is that issue with normals. Hope you will find a solution and thanks for such a great add-on.

The object size is 100 units in the first scene and 10 units in the second one, and the bevel cut radius is changed accordingly from 10 to 1 unit:

EDIT:
I checked. It is not because of this.

Those values might come close to exceed python’s floating precision, I guess that’s also what you were thinking about Rodinkov_Ilya. In my python interpreter the term (1 + 1e-15) - 1.0 returns a somewhat correct value while (1 + 1e-16) - 1.0 returns zero. For terms like 100.00001 an unstable algorithm could cause large errors in python. That just popped into my mind, not sure if the comment fits here at all!

MODO - MeshFusion
Maya - HardMesh
3DSMax - Smooth Boolean
I just love it this kind of modeling its the best and most intuitive way to design/model hard surface object its like a hybrid between Polygon/CAD Modeling but take advantage of both approach.
I hope someone eventually will come up with a solution of this for Blender.
At least this addon is a good foundation.

HardMesh has been ported to Max. Currently in beta. I’ve tested it and it’s WAY better than Smooth Booleans.

Hello, Ilya
Can you give me an advice?
Why it won’t bevel my meshes? Oh, i can’t repeat your result.
Can you show your changed settings?

Can you hepl me, when i generate a random cylinders with script, I get interconnected cylinders, when I use a union boolean, then I convert the group to the STL file, I find a deformed model such that the shape of the different cylinders are rounded, in addition to the problem of intersection created by deformed areas, how to solve these problems. I do not quite understand what you need. But if the problem is shading, then you need to add loops to cylinders

How to solve the problem of intersection between the cylinders, and concerning the export to the STL file, the cylinders loses their geometry

Are you shared the script to generate cylinders

Are you sure you write to that thread?

Sory for this error, Can I share the script of generation of cylinders

in this script, if I have the case of an intersection between two or three cylinders, how to make the union then add the bevel and smouth without losing the shape of these cylinders.

You can not do the work by boolean-ing many objects at once. You have to do it one by one. First you must boolean the two cylinders and then bevel them, then you can proceed to boolean the other one -and bevel it- too.

Btw, keep in mind that the objects that you will boolean have to be with rounded corners and that it is better to avoid, as much as possible, making bevelings on areas which has previous bevelings.

I made the Boolean with bool addon Tool and bevel, when I add a smooth the cylinder is deformed, how to solve this problem, see Figure The best is if you have the intention to use BAB (Bevel after Boolean) add-on, to keep from the very beginning your objects in smooth shading. So that you may have a better control during the whole process. Applying smooth shading after the operations with BAB can make you meet strange results.

The operation that you show in the screenshot is in fact a very easy operation. BAB can do a very good job in such a situation. So, the sole needed thing is to follow the steps I mentioned.

I thought you were asking me to write the whole script for you.

Add a couple of loops and a little bevel