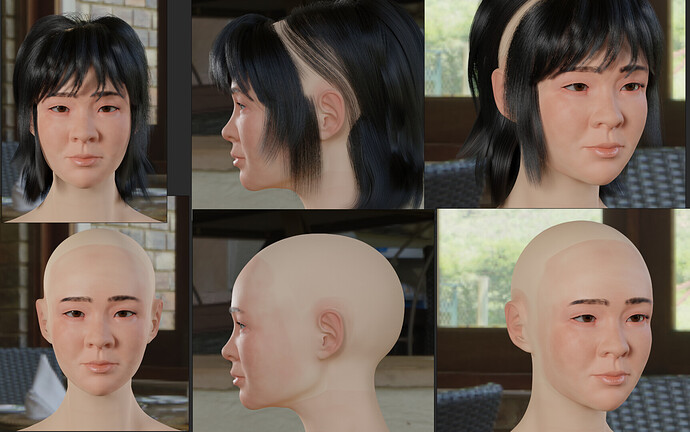 Ignoring the missing patches of hair and the incomplete texturing around the face:

Wondering how I can further push some life into the face. Having difficulty pinpointing problem areas and how to improve from here. Looks lifeless, especially in the front view. I feel like the hair makes it worse as well. Any feedback would be greatly appreciated!

Rendered in Cycles.
Diffuse and roughness painted by hand.
Used some skin textures for sculpting to try and detail the skin but I think I should push it further?

,
nice… very nice… on a very quick view i only can see that the lips aren’t parted yet and the angle in the eye toward the nose needs a little more work and i mean this positively because you properly want to to do that

… after a while: maybe the front face (with the diffferent texture) is a little to far away from the ears? For me it always isn’t easy to value a head form without hair… even real photos of young bald people are a unusual sight…
Did i said nice already ?

Hi, I appreciate the kind words and the advice! Looking at this now and at some other feedback I’ve gotten, I can see that some of the proportions of the head and details of the face are a bit off. I do agree that it’s hard to evaluate the head without hair, so I guess it wouldn’t hurt to push on a bit further to come back and iterate. Thanks again for being nice.

The face looks pretty good. I wouldn’t say it looks particularly more lifeless than most unrigged or unposed models with unfinished textures. The nose might be slightly high and the proportions in the y-axis (profile view) might be either slightly too flat or slightly skewed, but I’m not sure about that.

The hair only makes it look worse because the hair isn’t very good - which no one’s early work with hair particles is. Trust me, I know what I’m talking about because I’m terrible at them (EDIT: I originally said terrible at them too but that’s not what I meant as this isn’t actually terrible, it’s just not yet good. Now mine are terrible, I’m holding out for the new hair system). Anyway, what you’re experiencing is very normal. You may be able to improve them as you continue working on the hair.

Hi, Lee. Thanks for the kind words! I’ve since picked up some other projects, so haven’t been able to go back and iterate on this too much at the moment, but I do agree that continuing to work on the hair would do me wonders in pushing the character. Also holding out for Blender’s new hair system.

Shouldn’t be long now. I think they’re aiming for 3.3.