I am in the process of making a game in Unity 3D. I am using Blender to create everything. Here is a link to my basic game documentation. I have currently finished V.1 of my low poly models and textures. I am now doing basic programming.
https://docs.google.com/document/d/10aYdLUqq5-mquEM6ZQZEQ_W36-Ew5r491QGKkxdwphQ/edit?usp=sharing 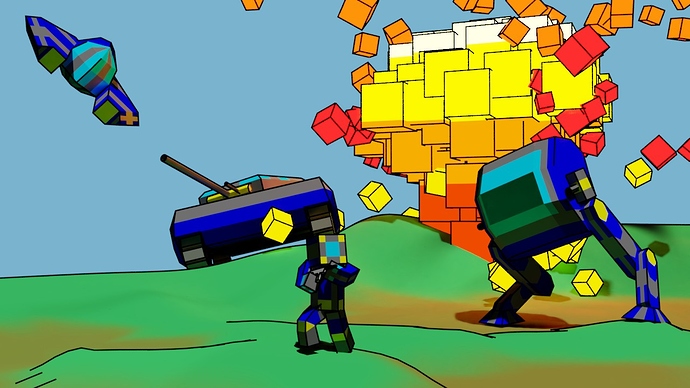 Feel free to comment or make suggestions both here and in the google doc. Thank you!

July 21, 2018:
I am in the process of making the shooting script for the person. I did another cute little render. Not as much action, but it shows all the models. 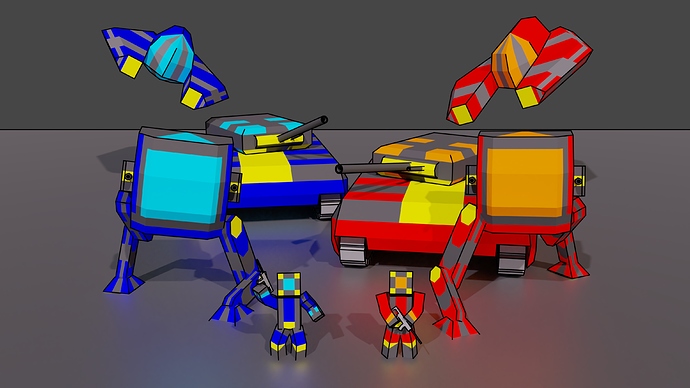 The game looks cool in the screen shot.

Finshed all of my modeles except for some particle effects. I am leaving those for later when I know exactly how I want to animate them.
I have baked all my materials into diffuse map, 2 for each unit. 1 blue, 1 red.
I have finished the basic movement and camera script. I now have the 3rd person camera and walking working with the person, including animations. I plan to do some more code, basic UI and other stuff, then I will work on making all of the models move around and work with the camera script.

We’ll see what I do after that. I have a long list of stuff to do, and a sense of when I need to do them, but I don’t know exactly what order I’ll do them in.

i like the toon style, and the little models too

I have added a newly rendered image to the first post of this thread… nothing really new except i have finished the movement script %100, and am now working on the shooter script

Ok, I have made some progress… Finished the bullet and shooting script. I also redid some animations. I plan to work on the server stuff next. After I get that working, I’ll finish up the damage and health scripts I have prototyped (the green bar in the top left is a basic health bar that actually works).
Sorry for the bad framerate, I screen recorded it with quicktime, and I forgot to change the setting from ultra to low, so it’s running a really low framerate and hopping all of the place…

After I get the arms IKed to the gun so it looks like he’s actually holding it, I’ll hopefully fix the head (so it follows where you’re looking). I plan to control the gun with 3 different positions, Passive, Moving, and Shooting (with a kickback position as well) that it will move to/from.

After the person is a practical 3rd person shooter, I will do reloading, and hopefully the grenade as well. After that I will clean up the UI, and implement the simple menu system I have made.

Then I will make sure that everything is tweaked and debugged. Hopefully then I can move on to animating and programming the Mech. After I do all of this again for the mech (hopefully I can reuse most of my code) I will make it so you can summon the mech, and begin basic gameplay.
This will go on of the Tank, and then the Hover…

Then I will do game modes, and then the power ups/ weapon types.

I plan to release beta when I finish the game modes, and see how the power ups/ weapon types works!

Finished basic damage, added health, gernades, and a basic “you were killed” thing when you die.

I am working on implementing my menu. Then I hope to IK the arms, and then I’ll bassicly be finished with the person after a few tweaks.

Hopefully by Monday/Tuesday I’ll have a mini game ready. It will be rather simple, you as the person, with flying cubes that will shoot at you and do damage. You can blow them up, and collect points.

After I get the person how I like it, I’ll go onto the mech.

Menu is done, I was gone Wed-Fri so I didn’t get any work in.
Finished health + damage.
I just need to to the arms (IK and grenade throw animation), falling + jumping animation, and some stuff with the assault rifle.