wip___a_lonely_christmas_carol_by_icesturm-daqjpt1.png1809×1164
After about 4 days of modeling, texturing, rigging and lighting I’m this far with my image for the Blender Guru Christmas competition. I’m not done with all the modeling yet though. I would really really appreciate some ideas and your thoughts on this image so far, because I’m having a lot of problems with telling the story of those two orphans. (The image needs a lot more samples I know.) 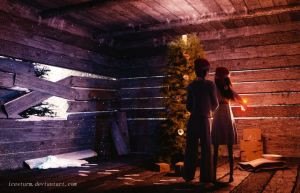 I love this idea! Great story, and TBH, I’m getting kinda teary eyed. The Cobwebs on the ceiling look a bit fake. I don’t know if you’ve seen this tutorial or not by Gleb Alexandrov:

I love where you are going with this!

God, those characters must be freezing dressed like that with the snow outside! Maybe either give them a fire, some warmer clothes, or hunch them against the cold… just a thought…

Really nice use of lighting and texture by the way.

I’ll do what you guys said

This is a very nice work, I love the lighting, tuhe materials, the story…
As djtartak said, you should make the ghosts more visible : I didn’t even notice them the first time I saw your render.

And my only problem is that your characters have too static poses.
Plus, the adult seems to have a back problem : Hello Icestorm
I really like the Story in your image.
The opposing Colors are pleasing to the eye.
One Little Thing, that came to my mind is, that maybe you can make the ghosts more “smoky”, and disturb the edges a Little.
I know smoke is very GPU intensive, but maybe worth giving it a try.

try working on layers and compositing later - this way you can skip the hardware limitations a lot !