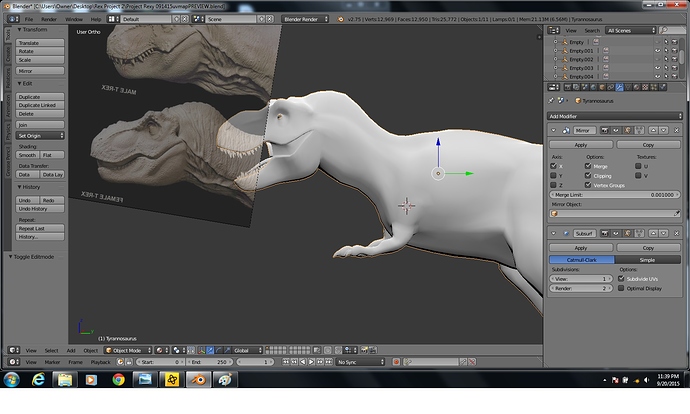 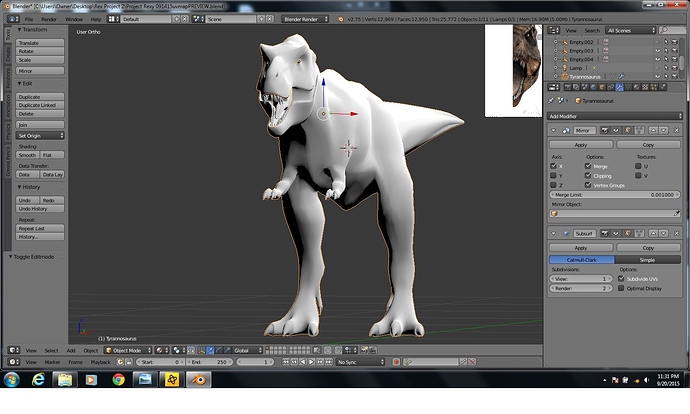 I’m brand new to blender, but I did some modeling on C4d back in high school. I’ve been using some youtube tutorials by Jjannaway3D (while taking some liberties of my own,) To create the Tyrannosaurus from Jurassic world. I’m a little stuck though. I’m pretty darn near close to finishing the sculpt, but I don’t know what step to take next. FYI my computer is not very powerful, and it has problems when i go into sculpt mode or import it into sculptris. I’d like to add details to it, but I don’t know if I should texture it first or sculpt it first.

If you need the blend file, let me know.

it’s a good start, you clearly understand topology quite well.

for sculpting, here’s my attempt to explain. there are 2 ways that you can sculpt with blender.

since both type of sculpting generate a truck load of verticies, aka, more infos, so there will be a limit to what your computer can withstand, i personally can only go as far as 2 million verticies for sculpting. so using the textures to imply these details would be a good enough alternative, if you got good eough 2d designing skills.

feel free to ask questions, though i’m no expert, i’ll try to answer them.

So with dyntopo sculpting, would that be good for making a bump/normal map with it?

Got my computer to start working with me in sculpt mode! I’m darn near done with the head and starting on the neck. 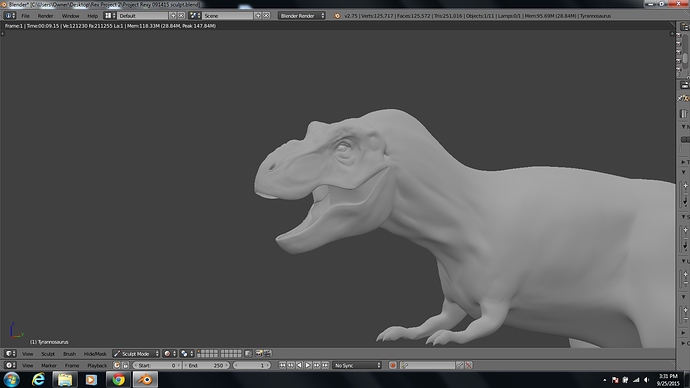 I made a seperate file with the original mesh, and I’m planning on baking this one on.

Critiques, suggestions and tips would be greatly appreciated!

Finished with the sculpt!!! 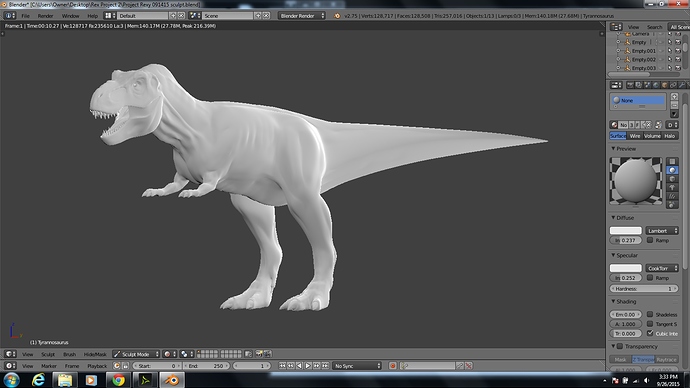 I was thinking of doing the scales, but that would have been too tedious for my tastes! Just willing to start on textures right now. Is it possible to mesh two different types of bumps/normals? Like if i did the scale bump in the textures and combined it with this hi-poly bake on the low poly?

sure you can, bake a normal map from the sculpt, then use the texture map as a bump map, combine the 2 with a Vector math node. i suggest get to know the render engine first. blender have 2 render engine (technically 3 but the other 1 is the game engine, which i don’t know much about), the blender render, aka blender internal is the old school one and don’t really do a very good job, people mostly use it for cartoons renders. cycles render is the future of blender, featuring an easy to use and very flexible. so check out these videos about it:

highly recommend every one of BlenderGuru videos BTW.

for your rexy, well you can go a bit more crazy with the sculpt if you like, but i understand if your machine doesn’t allow that. 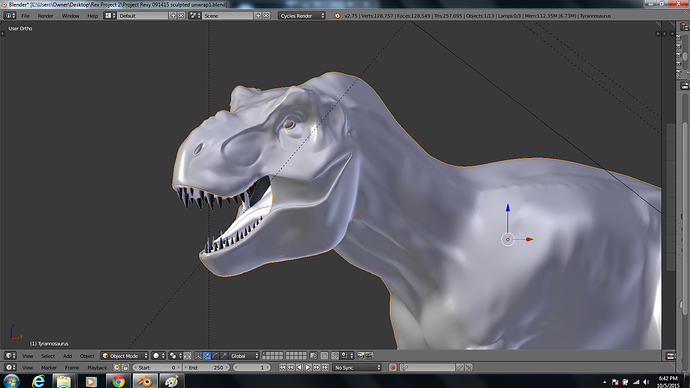 Just started on sculpting the details on her face! Turning out a lot better than I thought she would be! 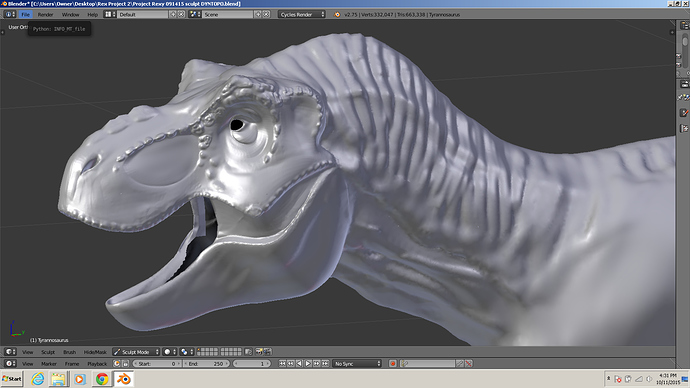 Any Critiques and advice would be greatly appreciated!

Hey guys! You ever have that thing when you think you should keep adding details, but you don’t know when to call it quits or when it’s good enough? That’s me right about now. Should I just leave her be at this point and start the retopology so I can get on to texture painting? 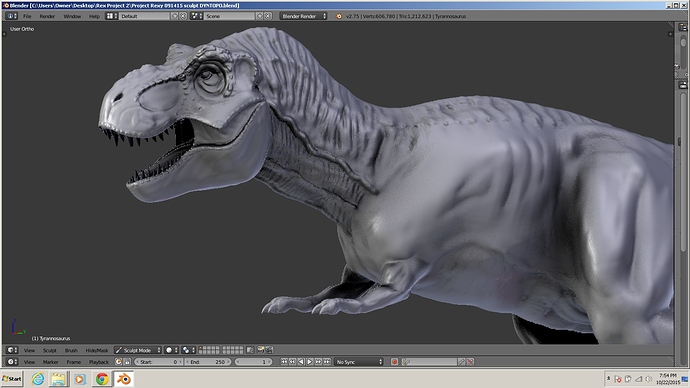 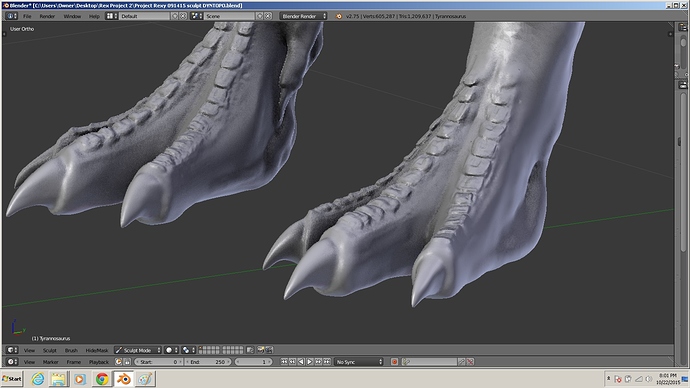 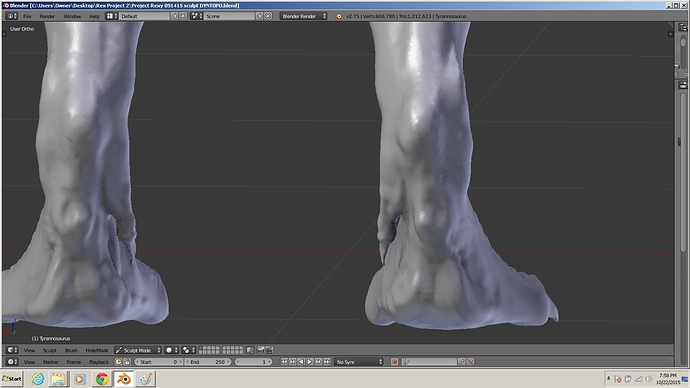 that’s a decent level of details already. but it is more so on the neck and head, the rest of it is still bland. while you’re at it, why not sculpt more on the body as well.

Wow, that head looks amazing!! I’d definitely not want to meet her in a dark alley! Or… well… anywhere

The body does seem a little under detailed for how detailed the head is. But I guess you can get away with that with really great textures? Maybe?

that’s a decent level of details already. but it is more so on the neck and head, the rest of it is still bland. while you’re at it, why not sculpt more on the body as well.

This is dyntopo. Surprisingly my computer handles it better than multires. I don’t know why…

Hey guys!!! After…what…Two months of modeling this thing, I FINALLY got the sculpt to where I’m fully satisfied with it! The only problem now is the retopology. I guess a few youtube tutorials should help me out in that!!! 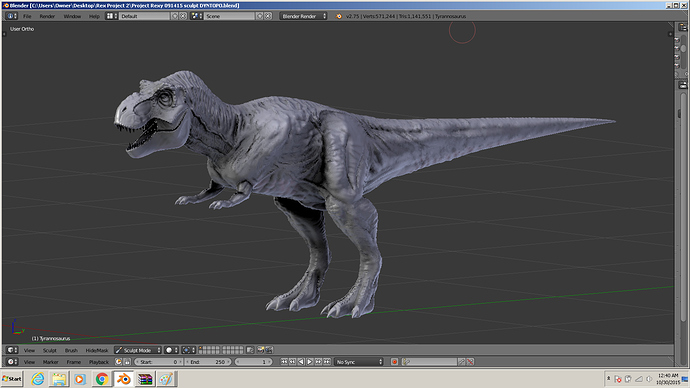 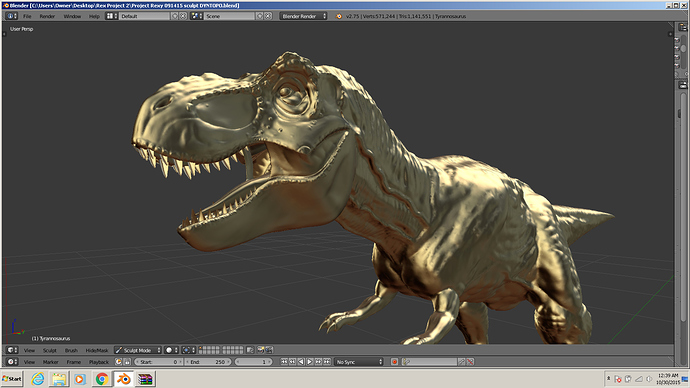 Anyway, critiques would be nice, and any advice is welcomed!!!