This is still very rough, I’m using my crystal that I made from my abstract render, but modified it slightly. The plan here is to have it mounted on a nice wood staff with some ornate gold rapped around it. The thing I havn’t a clue how to do yet is I want to make the crystal glow from the inside, and not have to do it post pro. Any ideas of how to get that effect. I though about putting a sun lamp inside and turning down the energy but have yet to try. Probably not much to critique atm since blender crashed and I hadn’t saved the staff part yet, but here are some of the test renders up to that point. I’ll post more soon on this. C&C requested and appriciated.

Wow, that looks very cool… very realistic. I can’t wait to see more of this.

A crit, the gem looks solid plastic or broken Jell-o. Even opaque gemstones have a small refraction going on near the surface (try looking at some Buddah Beads and you’ll see what I mean)

The gem also looks like it’s going to fall off the mount (unless the mount is buried deep inside the thing). But I like your style. Very convincing. Nice detail

The shape of the crystal is a little weird, and it’s way to big for the mount. The design of the mount, however, is really great.

Ok, I’ve made the stone smaller and added in the staff and started the rest of the finished mount. There will be a sort of decorative cage around the stone when finished, the ribbing you see is temporary till I can finish molding it into shape. I’m having a hard time with the wood though, but I’ve only spend a little time working on it.

As far as the stone looking weird, I like it how it is, the shape won’t change much from here. Its not suppost to be your normal out of the ground stone, it’s suppost to be a magic stone, as I image it, the stone is alive and still growing as the wizards power does, so the protrutions are its growth so to speak.

c&c always appreciated, thanks Sago, rohancorwyn and lakcaj for your comments, I tried to do what you all suggested.

I really like the design, but you still need to work on the glow.

Other than that, you coul try making it look old.

As he says the stone is supposed to be alive so this glow and lightning don’t seem strange to me. If the goal was to make something real then I would agree but apparently this is not the case
But I’m convinced by the mount (the black part, the shape reminds me a strange flower) but it is not finished apparently, so, I’ll see.

how did you get that really nice looking crstal/rock affect? both in meshing it, and texturing, it looks awsom.

Soarsails - Any ideas on how to improve it? I have no clue as to how to produce a true “glow”. What I have there is just a icosphere with an emit value and then another sphere to add the bright pink color. I’d love to actually make it have a halo, but the “halo” setting in blender doesn’t seem to do what I want it to, or I don’t know how to use it correctly.

Edheltar - I want it to “look” realish, though I’m suspending reality, since it is for a wizard. It does look like a flower, and after monkeying with it last night I removed it all together. Once it was fully rapped it looked like a tulip that ate something really bad.

Any suggestions or ideas are always welcome, no need to wait to see what I come up with. This is just a project to get more familiar with blender and it’s capabilities, not a contest piece or something.

Pork - Link to a .blend file of the crystal as it is in the last update. It’s easier then trying to explain it all to you. Enjoy!

Thanks for the comments and suggestions, always appriciated!!

When I said “I’ll see it later” I mean that I don’t really like the global shape of your mount :). It seems to be a strange tulip and I don’t know it will evolve later so I didn’t want to critize something you haven’t finished. That’s all.

But.
The shape of your mount is weird to me because it is to symmetric on contrary of your gem. Your cristal is just chaotic and this is what I like. But the mount seems to be a perfect flower, simple, brilliant, very clean. And it breaks the global structure of your image. Perhaps you could make a wood staff really destructurated at least as chaotic as your cristal.
That’s what seems weird to me.
And also the black part (refer to the image).

And for your cristal, insted of putting an halo inside why don’t you put an halo ouside. The gem will look quite reallistic but the glow effect on the outside will make it more magical. The halo could be made as an antmosphere for a planet.
I hope you see what I mean.

No more crit’ for now 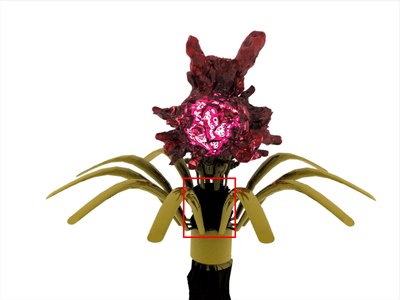 Hehe, Ok, that’s great stuff, will take that into consideration. The reason that part is black, and it took me a while to realize, was that the norms were all screwed up. I’ll have new images later today or tomorrow for sure. Thanks again!!