Ok, this is my “work in progress” 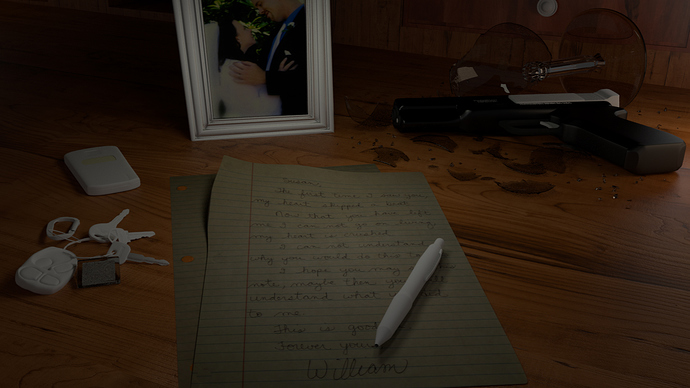 It has been harder than I thought.

Just want your over all opinion!

I plan to add a gold ring on paper. Maybe I should make a better cell phone? And shoudl I add something into the top left corner?

OOPS! I was going to post this in the “work in progress” forum /:

Wow. That is pretty intense. Finish the materials and increase the light a little, or at least the contrast, and we’ll talk. Or maybe we should talk earlier. Don’t do anything stupid. There is life after a broken heart. I’m a 4 time survivor.

I would feature a little more light on the note, not too much, but enough to bring it to the focus . . . got some texturing to do on the rest, but I am sure you are working on that . . . looking good so far

EDIT: Don’t worry about the cell phone, it isn’t that important to the scene - just texture it realistically enough to get by (maybe a ‘1 missed call’ message on the LCD would add a bit of irony - if this is post-mortem, that is) . . . and I wouldn’t necessarily add any more objects to the scene, don’t busy it up too much or you will dilute the feel of it all.

Thanks! Guys! Will do!

Anyone have anything more to say?

So far the lighting seems pretty dark overall, not just on the note. If I were you, I would try to boost it a bit so you get that nice contrast - light and dark.

Modeling looks great, textures are nice, though the wood bump texture for the table is a little noisy. You might try running that through Photoshop’s Despeckle or some equivalent GIMP filter.

The broken glass looks great. That pistol though - I used to have a pellet gun just like it when I was a kid. That think was so under powered that it would barely shoot through a soda can. I found a picture of it:

If you modeled it, nice job! You may want to consider either finding a model for a higher caliber over at Blendswap, or making one yourself. I realize that most people would have no idea that that pistol is actually a pellet gun, but for me, it kinda takes away from the plausibility of the scene.

^ Thanks! … oops! you nailed it… /: well… like you said “most people would have no idea that that pistol is actually a pellet gun” so…

It took me like a week to make it, I really don’t want to make another one

Does anyone know how to make realistic blood in Blender? I was thinking about adding just a little too the desk… ? Would that look good?

Also, any ideas on what kind of lighting would work best? what do you think of the lighting in this render? 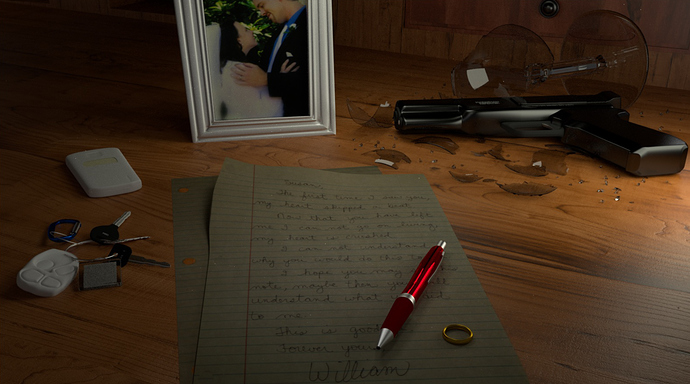 I guess red liquid with some subsurface scattering would do the job.

^ ok, I am going to sound stupid… but… what is subsurface scattering? /:

Subsurface scattering is an option in the materials panel in Blender that gives the impression of(and don’t hold me to this, I may be wrong) interactions of light within an object, and the effect of partial translucency such as that seen in some rubber, candy, etc.

To me, the lighting needs some work … the glass is in a dark shadow, the paper can’t be read … and just, in general, I wonder how the composition of the piece could be improved to make its “story telling” qualities more effective. I think that this still-life has a story that you intend to tell but both the present exposure/contrast levels and the photographic composition are right now working against you.

As for blood, dunno … that might or might not be worth adding. Oh, it might be fun to do (so to speak… ick…) but I’m not sure if it’ll pay the freight.

So, what would be your advice? to make the “story telling” qualities more effective? What type of lighting would you suggest? Diffrent camera angel?

And where you talking about the 1st or 2ed picture?

Actually, since you’re using Cycles to render, you don’t have the option to use sub-surface scattering. For blood, I’d try using a mix shader and blending between a diffuse and a glass shader. You should be able to achieve some sort of bloody looking liquid with that.

OOOOOooooooooooh. He’s using Cycles. I couldn’t tell, it looked a little like Cycles but he never mentioned cycles and so I didn’t think it was. However, you can simulate SSS with the new volumetrics patch that you can find on www.graphicall.org, and maybe use the diffuse/glass with a red volume or something.

Check out rule of thirds, as I feel the letter position could do with tweaking; also, I’d move the pen away from the note - certainly consider it.

The letter, or its contents is the focus of the composition, I presume? I’d also look at where the gun needs to be; everything else in the composition is - if not superfluous - then of use only for what they add to the principles - namely the gun and letter.

Ok, cool! Thanks all! 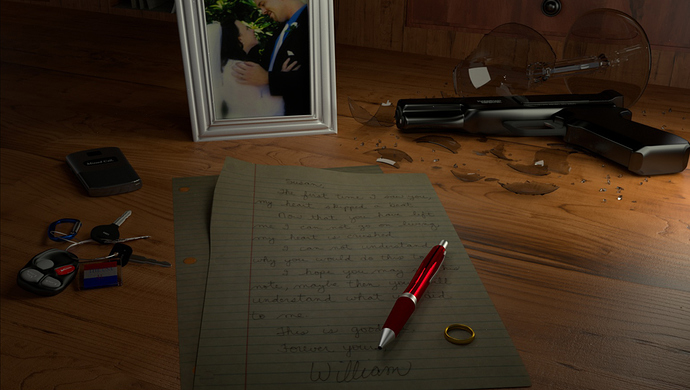 I rendered it last night before I saw all the comments. I will be working on fixing it, but here is a pic for you too see some of my progress.

Does anyone know of a way to make the “missed call” glow on the cell phone?

For the missed call put a plane behind the text and set to emmit with low value.

Hey, its looking really good. I really love the table’s texture. A couple of suggestions though. For the light, I think it would fit better to push the light sources color just a nudge in the red, orange direction, I think that would add more mood to the scene.
On the note I would raise the intensity. Everything else in the scene is light pretty well, just see if you can’t brighten the material, if that doesn’t work I would add a lamp and turn it way down, and turn off the Spec value. I think that would help.
The Car key closest to the screen looks like it got bent or something, its kinda weird though, may want to look into that.
The last thing that bothers me is the Gun’s specularity. I think it could benefit from being toned down just a little.

Other than that you’re looking great! Keep it up, going to give this 5 stars.

I have been working on everything!

Here is my lighting set up. 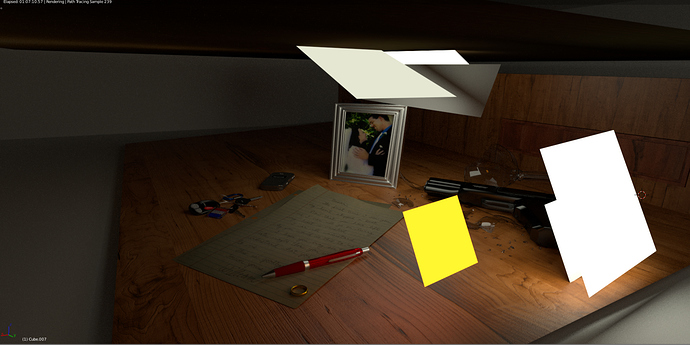 Any tips on making it better? I am still very new to cycles.