Hello, I am Mark and I’m using my friend’s account.
This is my project, that I call the Landzerstӧrer (Land Destroyer.)

WW1 combat was based on trench warfare and artillery support. Though German equipment was superior, it was in short supply. In the south, German artillery had to navigate it’s way through the Alpine Mountains, which wasn’t efficient because of the ruggedness of the terrain. This is where the Landzerstӧrer came into play. 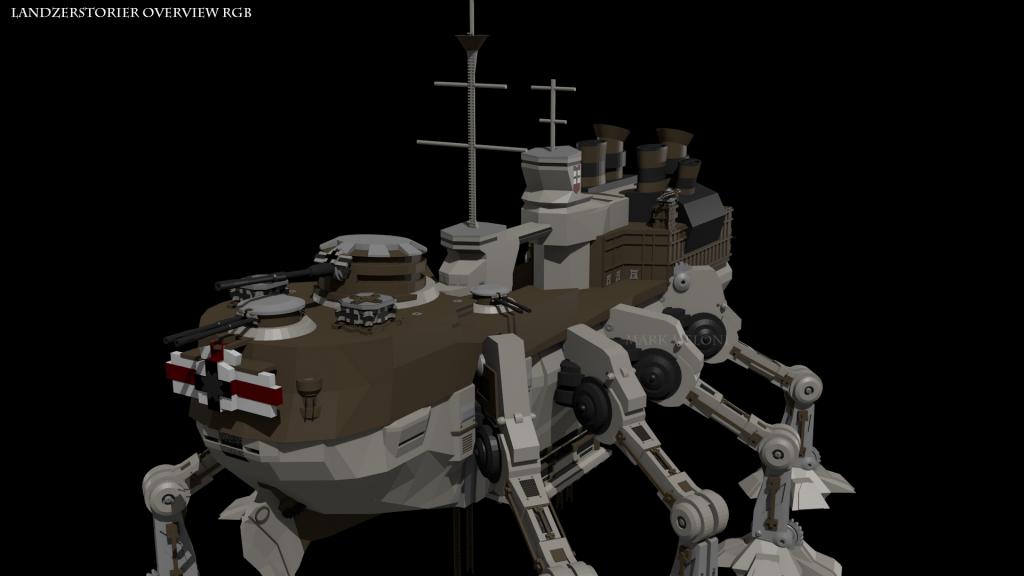 The legs worked better than wheels in mountainous terrain, and a 40 foot blade on the front of the ship shredded any trees in the way. A hospital, infantry quarters, and supply bay were controlled by ship command, which was located behind the main artillery. 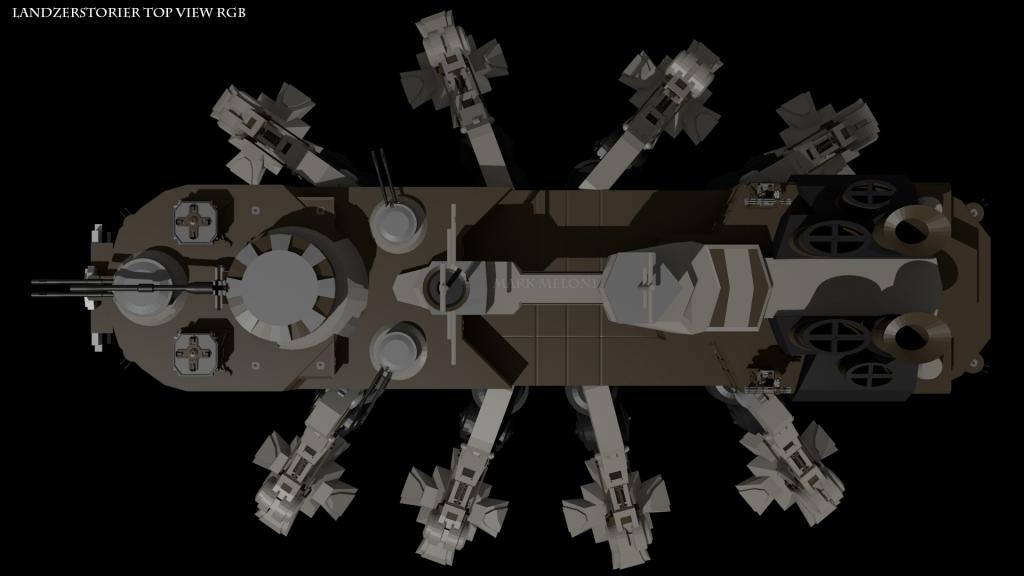 Fuel was expensive, so the engines were powered by burning trees in a huge furnace.

Its use in WW1 consisted partially of transporting troops and supplies, which were loaded up below on a platform. Most importantly, it provided artillery support. 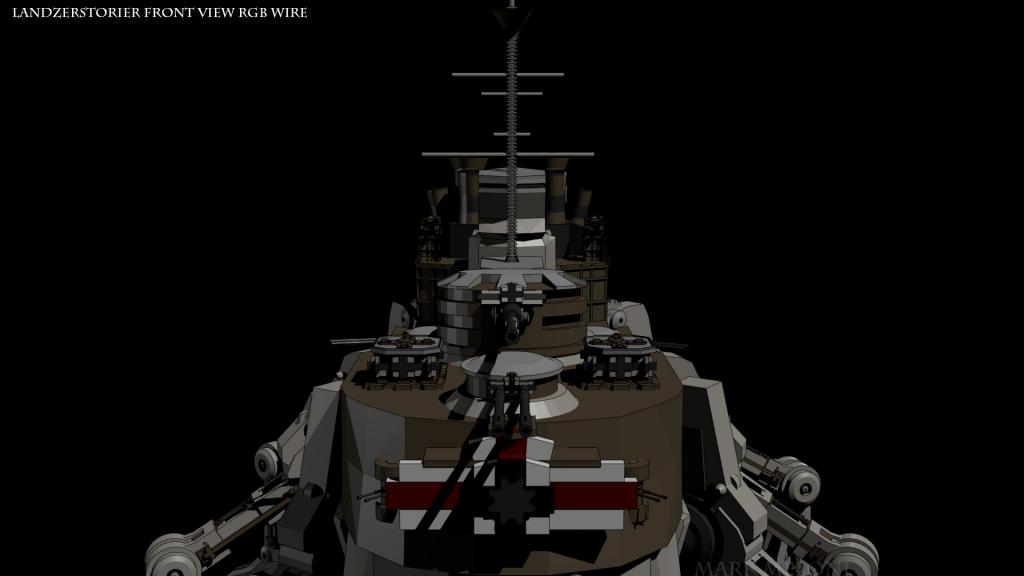 A war balloon was launched from the back of the ship, which located hostile artillery and flew it back to the ship. One hit from the artillery was enough to disable an emplacement.

So, please share any comments, questions, or suggestions below. Keep in mind I have only completed one 3d model project ever.

This is the battleship from Leviathan by Scott Westerfeld, illustrated by Keith Thompson. Its a 6 legged battleship and on my ship it inspired the giant blade, communication room and engines. Also its a great book if you are 12.

Also some stats: The Landzerstӧrier weighs in at 240,781 vertices. It carries 134 staff and up to 22,000kg of troops and supplies. It prevails in long and medium range artillery, and has a reasonable anti-infantry and anti-air capacity. Speed varies greatly on the quality of the trees and or oil burned. Among the disadvantages are its extreme cost to build, its high fuel usage, and its exposed leg gears. Because of the exposed leg gears, it would not function well on the frontlines, which is why its a support unit. In combat operations, the Landzerstӧrier strays up to a mile away from the frontline.

While I love the design, I don’t see it being very steampunky… it doesn’t have that turn-of-the-century feel. Looks more like some sci-fi walker from Attack of the Clones with an old battleship stuck on top. Which would certainly be terrifying in WW1.

First of all: If You are going for correct german, it should be “Landzerstörer” not “Landzerstörier”.

That being said, I like the idea. However, the flat shaded hull seems off to me. Other than that, it’s cool. Are You going to texture it too?

@Knights: Its only a little bit steampunk. Will look more so when I texture it and even more with the war balloon on top.
@Onyxldol: thanks lol I had a typo and then copied and pasted it because of the ö so its misspelled everywhere XD
Also, I’m planning to add uneven armor and damage to the hull. It’l look great. I want to texture it but that will take a lot of time, but if I do I might make a short movie out of it.

I see, yeah, a balloon would help the feel. Also, instead of round joints, make the gears actually be exposed. I see you have that on the feet. Also adding actual steam would help

But I’m sure you know that already

So next up, I’m going to add plate armor on the hull as well as dents, going to rig some ropes and a flag on the mast, add cargo supplies on the cargo floor, then make a war balloon. Afterwards, I may texture it and name it. Sound good? Anything missing?

what should I put on the back?

Update: Its been a while but I made a smoke simulation and a flag. How do they look? 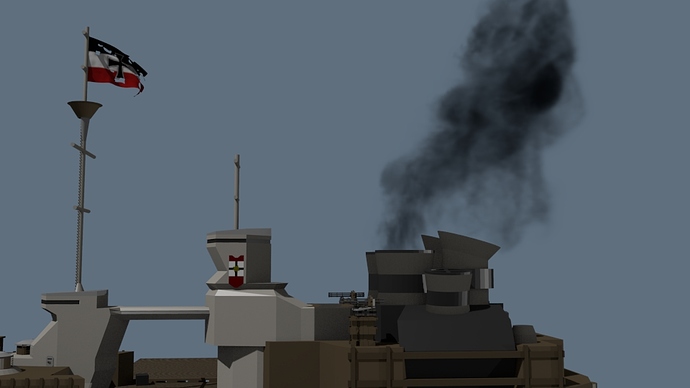 The smoke looks a bit unrealistic in my opinion. What is it missing?

The smoke looks a little thin to me. I think it should be billowing out. Also, this mech can’t possibly move very fast, so I would imagine the smoke going all around, kind of settling all around the entire ship (instead of just go backwards).

Also, is it smoke or steam? I know you said smoke, but it’s steampunk, so I was just clarifying… because steam would be white.

When the mech starts up, it runs on steam stored in the engines to get it going. Once it approaches a forest, it clears a path of trees and burns them for fuel, giving it continuous motion until it runs out of trees. So yeah, as a cost saving measure it only uses steam to start up.
As for the smoke being too thin, thanks I’ll try to fix that.
How can I make the smoke look more realistic?

Starting work on the central deck. 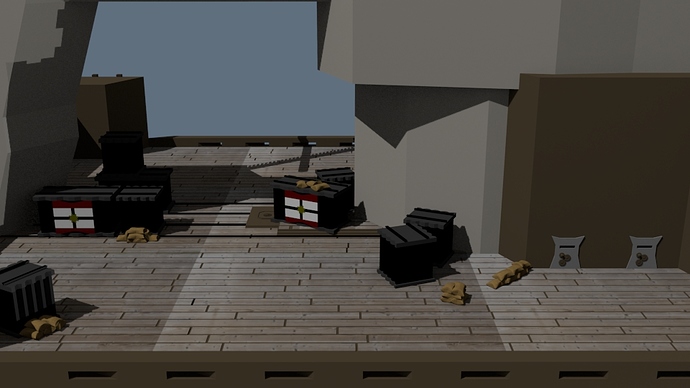 Amazing, is this a Wip for game?

I could imagine driving it, as AI’s you upgrade control the weapons, or even a multi-player game, and this is like planetside 2’s Sunderer, A mobile spawn location, and artillery point, (it could have an gatling anti-aircraft cannon on the deck?)

The deck looks good. You probably haven’t started texturing it yet, but I imagine with the smoke it would get rather sooty.

Sorry, I haven’t worked with smoke before, so I can’t give any technical advice. But I know once the smoke spreads away from the hot air it will go back down to the ground, so you’d have a sort of mist settled around the feet and on the deck of the mech.

@Blueprint: Thanks! I’m making a render of it and maybe a movie. Its been a while since Ive used the game engine, because that project is halted for this.
@knightsfan: good suggestion! Now I need to find a free normal map generator for the deck.

~Does anyone know where to find a free normal map generator? Also, if anyone has experience in modeling humans, masks, weapons, clothes, tools, etc, and would like to help, please message me or post here~

I’m also hoping to make a 3d printable model out of this from shapeways, not sure how it would turn out though. 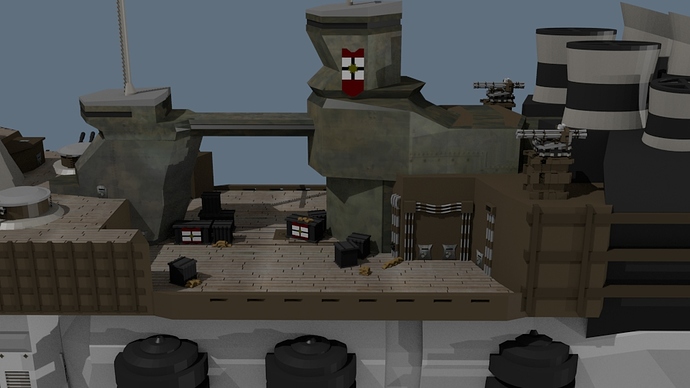 I created my own 2 types of camo in paint.net, then layered them on top of some select metal plates in photoshop. You can’t see too much from here, but it looks like camo metal! Now what to do with the rest of the upper hull? 0_0
Robert_Banks (Robert Banks) April 29, 2018, 4:05am #20

Textures, wires, tarps, support beams. These support beams are actually pretty useless right now, what could I use them for? 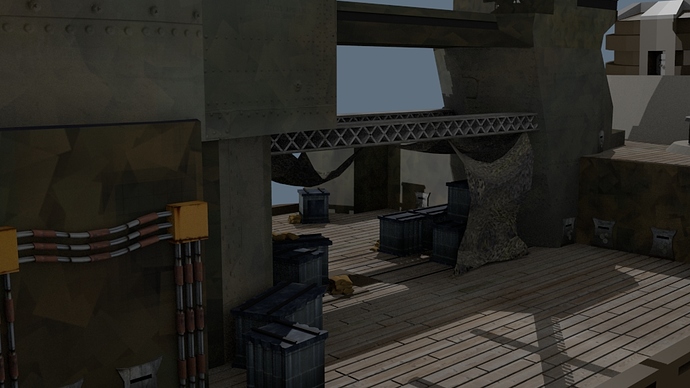 I could make the command bridge much bigger but I’d prefer not to do that. Any ideas?
next page →