X Mirror is not working for certain areas

Why can’t I move both eyes or both eyelashes? They are perfectly symmetrical because I used mirror to create the one on the other side. I’ve tried symmetrize, snap to symmetry, nothing works. 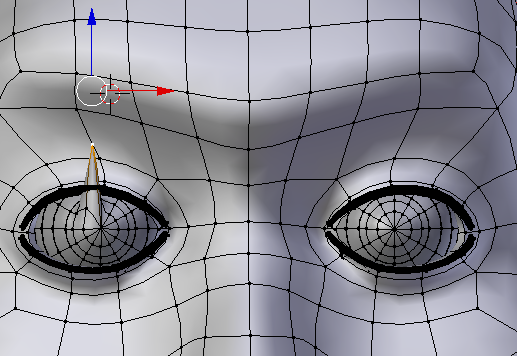 It’s just the Captain Blender tutorial I’m following. I can’t get symmetry on anything but the body and head. I can’t get it on parts like the inside of the mouth, eyes, eyelashes, belt. I’m linking to a previous version I had uploaded, it’s not old.

If you have applied the mirror modifier it will no longer mirror your actions. Before the modifier is applied you should only see vertices on one side, the other may appear gray or dimmed.

I still have this problem. No matter what I do I can’t keep full symmetry on the eyes. This was really annoying when making some shape keys.

Did you try NOT to have X-Mirror and Topology Mirror enabled at the same time (#4)? As soon as I turned off Topology Mirror in your test file, the editing was symmetrical.

Yes I did. It seems like it works but believe me, if you move some vertices a certain distance, it does not work.

It’s pretty obvious why it doesn’t work. You’ve got several vertices on top of each other so blender can’t tell which ones you want mirrored. You can either remove doubles or split the eyelashes to a new mesh, then delete the loop of the eyes that’s on top of the other from both eyes, then it should work.

Well it wasn’t obvious to me. I didn’t realize I had some duplicated meshes there, first time I have this problem.