I started to Yafray-render a 4000 x 3200 pix Tiff-image yesterday and still waiting. I’m wondering if this is a matter of hours, days or weeks I still have to wait?
When I rendered the same image as 80% jpg in low guality and 400 x 320 pix, it took about 12 minutes.
Is it stupid to render Tiff-images?

I might be wrong but I don’t think the file format does anything to the render time. You can render an image, change the file format in the Scene button window and save the image with the new format without re-rendering. Sounds like your picture is either taking a very long time to render or it’s crashed

I started to Yafray-render a 4000 x 3200 pix Tiff-image yesterday and still waiting. I’m wondering if this is a matter of hours, days or weeks I still have to wait?
When I rendered the same image as 80% jpg in low guality and 400 x 320 pix, it took about 12 minutes.
Is it stupid to render Tiff-images?

The file format isn’t really relevant to render time, file format impacts the quality of the image and the amount of space it takes up on your hard disk. In this case you’ve gone from rendering 128,000 pixels to an image with 12.8 million pixels. So 100 times as many. It should take roughly 100 times longer. That works out to about 20 hours if the smaller image took 12 minutes.

So if adding one zero to 400 x 320 makes 100 times more pixels, maybe it will be rendered in about 7 more hours. My quality setting is set to best so does it affect rendering time? I see in the Blender.exe -window that render pass is progressing so it hasn’t crashed.

No, quality only is the compression done when saving. It has nothing to do with rendering quality.

least if you are talking about the quality setting among the file settings. If you are instead talking about GI setting that is going to make it a whole lot slower having it on the best setting.

It has now been rendering about 34 hours and still going on. This Render Pass -screen is still making these # symbols more and more. What do you think? 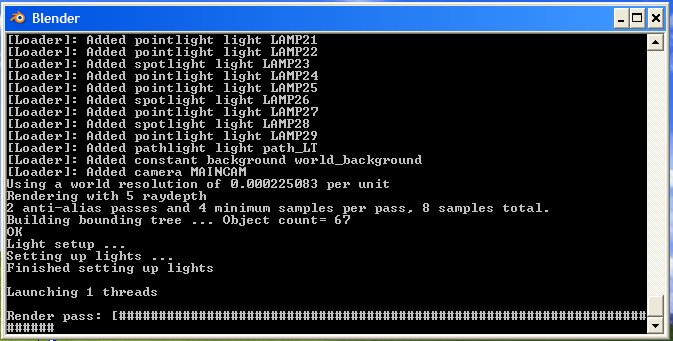 I think that is a long render.

The render pass always make those symbols (in yafray), the quantity depends on your resolution. I thought a 800x600 resolution. had 13 #'s, so your 4000x3200 will probably have some more.

Yup, should be ~4 lines of “#” so you got about 25% rendered…
Either changing the resolution was not the only change you made, or your RAM is too small, but you should hear your poor HD working like crazy then…

You mean this will take 140 hours? Shit. I have 1 gb memory and a AMD Athlon 3000+ 64 bit computer. I made no changes, only the resolution and the output from low to best.

Besides, with yafray you can always use the “render layer” technique to save time, as long as you don’t have problems with shadows.

I want to have big resolution to be able to print small poster size prints at least 200 pixels/inch. 300 pixels/inch would be what I was thinking of but then the render size would be 4800 x 6000 pixels.
What is “problems with shadows”? There is lots of shadows.

Tutana, that’s a good idea, but take into account that the bigger the poster, the less resolution you need, since it is intended to be seen from further.

About the “render layers”, it depens on your scene. Yafray always calculates shadows. But sometimes many objects in your scene have shadows that are not going to be seen from the camera view, or don’t interfere in other objects shading, then you can render those objects in a separate render pass to save time and composite later in an image editor. Take for instace this image:

In this image, (particularly the second view) the last floor of that building can be rendered in a separate pass, with the arab roof tiles. Because It doens’t affect the lower part of the buiding, and in a second pass you can use only parts from the first part that are really casting shadows (chemney, concrete, etc) without arab tiles. Then composite the upper part with roof tiles onto the lower part rendered without them.

You can use render layes with fake object only to get shadows and use another render pass to get details. Optimise your computing resources by using render passes, compositing and matte paiting.

Ok, thanks Alvaro, I have to get in to that if I get this rendering done first:eek: but do you get many different files then and doesn’t it take as long?
I know real big posters don’t have to look that sharp but this would only be size 16 x 20 and designing prints I’m used to the minimum of 200 pix/inch in these cases. I wonder why the 320 x 400 rendering came out in no time since I made no changes beside the resolution and output quality.

You mean this will take 140 hours? Shit. I have 1 gb memory and a AMD Athlon 3000+ 64 bit computer. I made no changes, only the resolution and the output from low to best.

Are you sure you didn’t change some render parameters? Was the “output” to best the TIFF setting or the GI setting?

Oh boy I feel lucky, this won’t take even a whole year.
I can’t see the Blender panels now because I can’t use Blender while it’s rendering but in the panel where you can choose between about five different quality settings from low to best is where I did it. In the other panel the jpg-quality was 80% in the 320 x 400 rendering and is 100% now and Tiff.
I need another computer for rendering because I’m afraid this one may crash if I use it too much while it’s rendering.

but in the panel where you can choose between about five different quality settings from low to best is where I did it.

So it was GI quality :rolleyes:
No surprise then…and the image settings have no influence at all, they only matter at the point where you go to “file->save image…” in blender. The internal buffer of blender is always raw float now anyway… 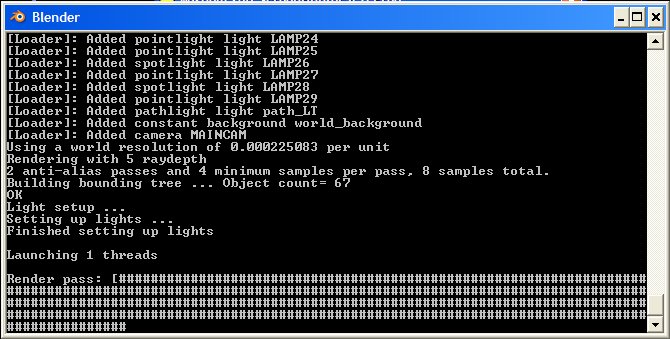