Z depth information for editing in After Effects

I have been struggling with Blender to get a render format that contains z depth. I used to make .RLA image sequences in another 3D app, and that worked great in after Effects. I read some Blender docs that said JPEG and PNG contain z channel, but After Effects isn’t recognizing any depth info from those formats. I want to use After Effects depth of field rather than Blender’s.
Thanks!

Png and jpeg don’t support zbuffer maps. (at least not as a separate channel in addition to color channels) In fact, the only non-proprietary format I’m aware of that supports a channel (or layer) for zbuffer is OpenEXR. But I think Blender is the only app that supports render layers within an OpenEXR file. 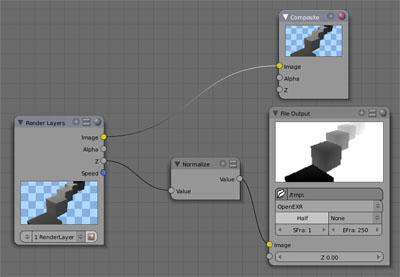 (…that way you only have to press the render button once.)
It’s annoying that AE wont read the z channel from OpenEXR. It deals with RLA and RPF just fine.

Right, FisB8, I went through a thread here on “Blender to After Effects” hoping that it would end happily. freen also, will a separate image sequence of zbuffers work in After Effects? Not sure I understand how that works, though I do get how setting nodes would make for one render job as opposed to two.

Thanks, this is what I will be trying then. So you end up with two sequences: image, and z buffer? How do they work together in After Effects then? Sorry, I’ve never had to do this so I don’t exactly understand what it does.

The easiest way I have come across for getting z-information into after effects, from Blender is to simply export your Blender scene as a maya document. Then you get a .MA file that you can import into After Effcets. The camera is synched to your footage, so all you have to do is render your footage out of Belnder, then use it as the background image in after effects. Because the camera systems will be synched up, you can render out of layers or individual objects if you need even more z-control from Blender

I see, freen, I’ll have to set up a render and try that. Thanks! Atom, that sounds really smooth, only I don’t have export .MA as an option. Is there a script for that or something? I’m using 2.46 and I tried exporting a .3ds but After Effects doesn’t want to import it. Is maya the only format that really works?

Thanks freen, I’ll have to set up a render and test this. Atom, that sounds so smooth, but I don’t have export .MA as an option. Is there a script or sometihng? Can any other 3d formats bring camera data into After Effects?

freen, thanks for that. Atom, thats a smooth sounding solution, but I don’t see maya .ma as an export option. Is there a plug-in for that? Is there any other 3d export that could maybe work instead?

Hi!
How is it possible to export as .ma you have a special plugin?