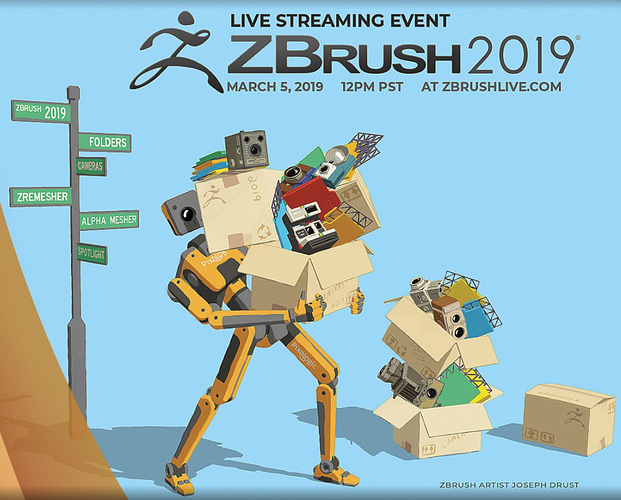 Looking at the intriguing Joseph Drust image, my guesses are:

Can’t wait to see what’s in store. Will this be a free upgrade for current users?

I’m still hoping for Linux support, although the folders and cameras will be great too.

Can’t wait to see what’s in store. Will this be a free upgrade for current users?

So far the upgrade was always free, so I think it will.

So far the upgrade was always free, so I think it will.

I hope so too. ZBrush becomes 20 years old this year. Even if they would charge something for this upgrade then they would deserve it.

Thanks, I missed the live stream. Did they say when the download will drop?

Folders are a long time coming. And intersection masker is what I’m most excited about!

intersection masker is what I’m most excited about!

The Intersection masker zPlugin has been available for free at the Pixologic site for about a year now I guess.

The only change is that it’s now integrated into ZBrush.

I’m reasonably excited about ZBrush 2019. Personally I can’t wait to have a go at ZRemesher 3.0 with the new hard surface improvements. The subtool folders are great too, also the ability to use them in Live Boolean mode.

I’m a bit ambivalent about the Spotlight alpha mesher feature. It feels a bit like a revisit of the old Shadowbox, a feature I usually forget during modeling.

The NPR rendering possibilities look very good, but to me that also feels like going back in time about 10 to 15 years, back when finalToon, Pencil+ and Liquid+ were state-of-the-art 3ds Max NPR plug-ins.

Hah, yeah, like 3 days ago for one! Did not know this.

I need to start paying more attention to these things. ZB has always been this querky mess of a tool that I just put up with. I just get in, do my sculpting thing, and get out.

Hah, yeah, like 3 days ago for one! Did not know this.

I know the feeling. Just a few days ago, ZRemesher 3.0 with hard edges support would have been a godsent if I had it before the deadline expired.

i liked the new easy/lazy shaders added. the new Zremesher is also cool. Still can’t pay the software’s price, though.

In the mean time I’ve had a go at ZBrush 2019. Let me summarize it briefly: I’m more excited about Blender 2.8.

Even if they would charge something for this upgrade then they would deserve it.

I bought zbrush 2018, so it would be kinda annoying to miss out on years of free updates and get on board just as they make it expensive to keep up with updgrades. One of the reasons I bought it is that the price keeps creeping up, but the free updates are still there, so it seemed worth buying.

Yep, I think everybody got it for free, as I have a friend who bought zbrush back when it cost $350 and he was testing out the new features of 2019 the other day (said he was a little disappointed because he expected more improvements). I was just saying the reason I bought zbrush was that the price keeps going up, but the free upgrades for all users has remained, so there was no point in waiting to buy it.

Yeah, that’s always in my head to. Lurking around the “add to cart” button for quite some time now. But the fact that it is only Windows/Mac is keeping me away. I might purchase a license if I could verify that it would run decently in a VM from passtrhough disk and GPU. But since there even isn’t a Demo/ Trial this is a bit to risky.

ZBrush is a sculpting powerhouse, but if you expand Blender 2.8 with the right set of add-ons, you don’t really miss out on most of ZBrush, with the exception of some extraordinary ZBrush hallmarks, such as ZRemesher, which is still the best auto-retopologizer in the industry, although 3D-Coat’s Autopo is nearly as good. ZBrush can also handle multi-million polygon models a lot better than Blender at the time I write this.

I would be very thankful for a specific list of add-ons. Please

I would be very thankful for a specific list of add-ons.

Check out this thread.