Some may remember that I’d started a Zelda fan game back in May, well I’m not dead yet. I found the old file about a week ago, and began working on updating and reviving it. Now I’ve fixed buckets of old bugs, and improved the look.

Updates:
New Link model: Now he has a face and does slightly resemble Link.
New Link animations: He now has completely new animations that look half decent, except for the sword swing.
Enemy AI: I’ve just finished building an enemy, I haven’t incorporated it into the game yet, but that’s what comes next.

When I’ve finished making it, I might put together a collosol tutorial which explains how it was done, most of it is still quite fresh in my memory despite being done almost 4 months ago.
I decided to do some test renders of the models to see how they’d look with an ideal toon shader, I thought I’d also post the results since they turned out quite good. I turned off the dynamic lighting because it really does drain the final result, I’ll leave it that way until I manage to find a decent toon shader that doesn’t attack the FpS so bad. Still, it looks ok without any shading, except for the few objects with col added to them. Like mentioned aboce, I’ve programmed an enemy so it chases you, then when it gets close enough, it stops and after a short while it’ll attack. You can only recieve damage, (displayed in the form of a col ipo,) when the enemy is attacking. 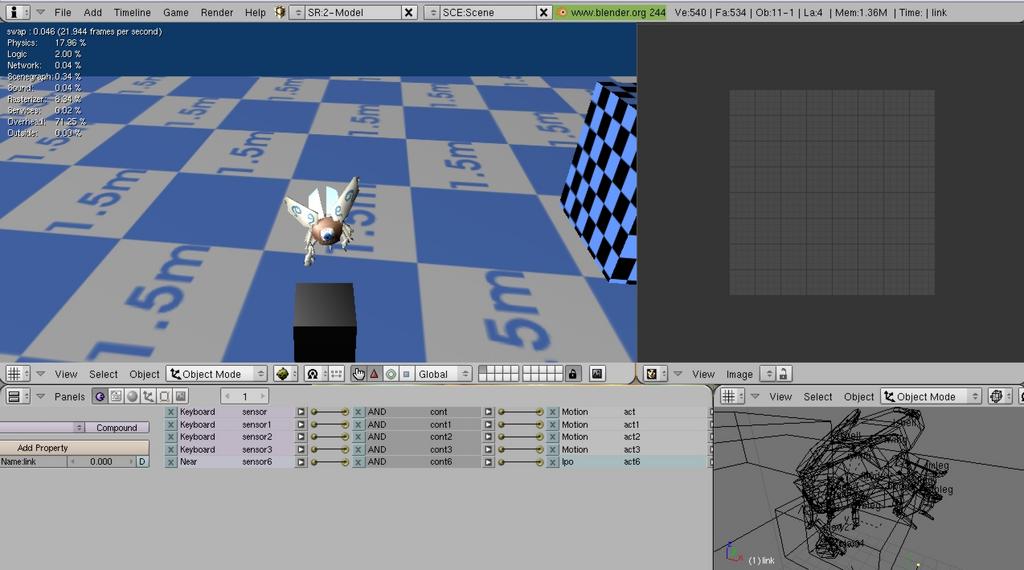 Now for the game itself. The file is zipped with WinRar, it usually takes about 11mb, but zipped it only requires 600kb.
http://www.savefile.com/files/1015427

And the enemy AI, which I’ll incorporate and post tomorrow or Saturday.
http://www.savefile.com/files/1015461

Feel free to edit, deface or whatever and enjoy. Have you done any work on item getting and selection? it will put you through hell, ring you out and put you though again!! good luck! :evilgrin:

Cool renders, good to see it hasn’t been abandoned :D. As for finding a toon shader, have you seen the glsl sources thread? It has a nice looking toon shader, although I couldn’t re-create it. http://blenderartists.org/forum/showthread.php?t=104031

Have you done any work on item getting and selection? it will put you through hell, ring you out and put you though again!! good luck! :evilgrin:

@ johando it’s about polys, i think there too many logic brick.

thanks everyone! I have actually been able to make items that have values which can be regenerated. I have the thing you pick up to add values on layer 2, (along with all my particles and a pot.) It took a while, but I managed to make it give you 5 of the item, unless you have more than 25, it’ll give you 30. Next 'm gonna attempt to let have more than 1 item at once. Any ideas before I try?

I’ve always found that runs a bit slow, but if you have a look, you’d probably find that the poly count isn’t all that high, I reckon it’s the strain from all the complicated logic it needs to be fiddling with.

I am a big zelda fan!, glad to see this game

Thanks Mmph!, I spent a while modeling him, trying to get it to look right. But I had to model him from memory, so he looks a bit off.

I’ve almost finished putting my enemy into it now. And I’ve started to redo the items and hearts. They’ll be on a separate scene now. I’ll post a new demo soon.

wow man dude! you have a long way to go to get there, first, the basic :
http://en.wikibooks.org/wiki/Blender_3D:_Noob_to_Pro

well i know the basics all im asking is when your starting off making a level do you:

1.create meshes
2.make smooth and form and sculpt what you want.
3.Add textures
4.connect meshes
5. add you charecter (with bones)
6.and then add physics and bounds and assigned keys

Dakka,
how, how, HOW, did you get him to hold a bomb above his head?
How’d you do the water effects?

Please tell me, it would help me so much.
Maybe post a .blend with just those two separate features (or two .blends) so everyone can learn.
Thanks.

hey dakka dakka I was looking at some things in your game and tried to apply my toonshader script to it but…!? how did you setted up this man! you’ve set the PhysicTicRate to 0.01??? your light setting is kind of funny (more funny weird) and I dont know why my toonshader doesnt work on link maybe there some thing in your setting I’m missing there…

gah i wish i had this much skill

loll forgot to put “use lender material” on

but there’s still some tweeking on your scene to look nicer I’ll work a bit on this for you, I kinda feel generous today

Dakka^2 , nice cartoony look
DLDing , when i see it i will edit and till you what is my opinion .

would you say that again please ? lol

, i will DLD it and Edit it again