This project is a joint venture by three Blender artists with each contributing his own skill to the project. In the end it will be an animation, roundabout 3 minutes long and we are planning to submit it to current.tv. It is a satirical caricature animation, based on Robert Mugabe, the President of Zimbabwe.

Here’s the first character draft. Quite a few changes has been made and I’ll update those as soon as I’ve made new renders.

Thanks for looking, any C&C welcome 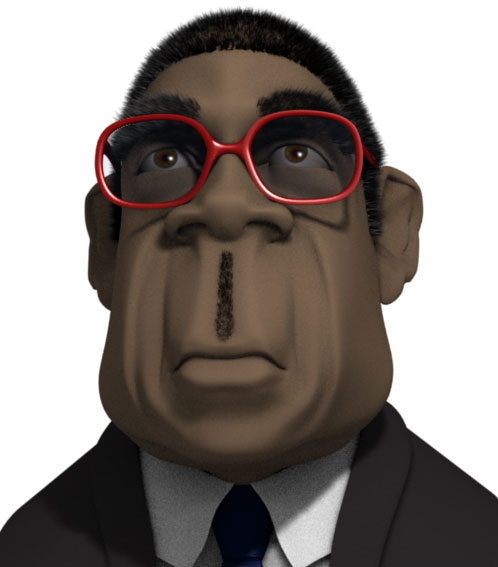 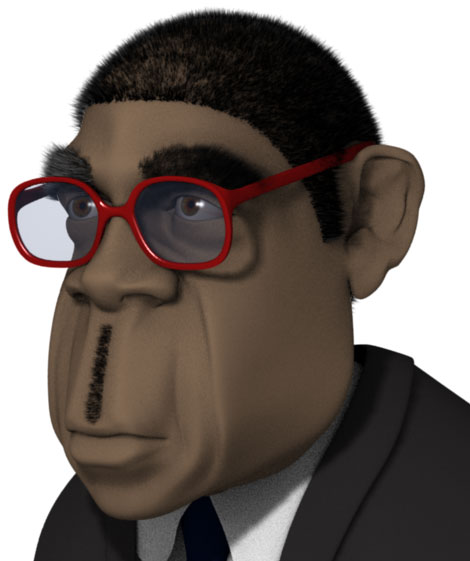 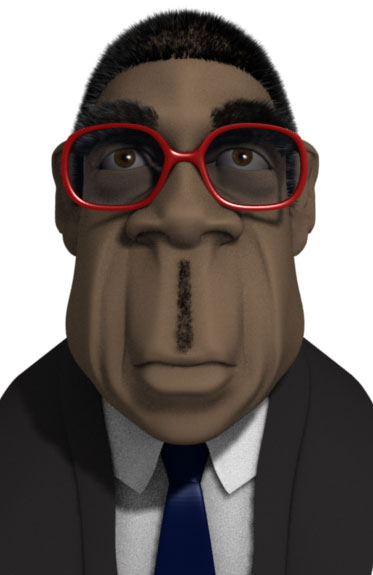 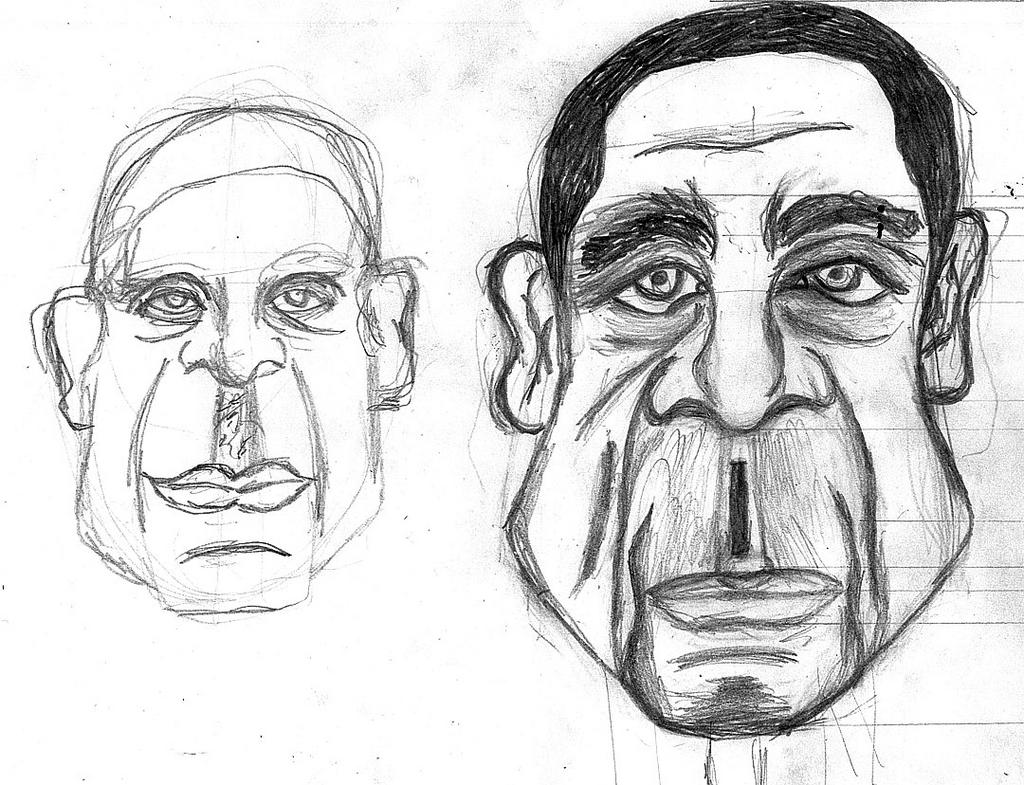 Awesome, you even nailed that little bit of hitler moustache he has. Hopefully he will be portrayed as the lower life form that he his.
Other than that please post some wires of the base mesh and the character body used for rigging.
Cant wait to see this!

Good modelling, though I’m not sure that it’s the best of caricatures. It doesn’t jump out to me as actually looking like Mugabe - The chin is rather pointy, whereas in real life Mugabe’s chin is rather flat. Also, it really needs to show his age, as that is one of Bob’s characteristics. At the moment, the model looks like a a rather young African man. I’m also not terrifically sure about your choice of the area above his lip being so long, although it seems other comic artists have done so too:

I can see why that effect is used, though I would also say that the forehead of your model should be a bit higher - that would also help and emphasize his age. His eyes also look a little too, err ‘kind’. His disposition may be better suited to looking like a mean old man.

BTW, are you from Zim? I grew up there. Left in 2003. My Dad is still slogging through though. He’s one of the few that’s stuck it out for so long.

Thanks for your replies and feedback guys

EP1 I haven’t modelled the whole body yet but here’s the face mesh for you. We intend to portray him as the tyrant he is :evilgrin:

Dan Your dad is very brave to still be there. No we’re not from Zim, but close

And have many connections to ex-Zimbabweans etc. I agree completely with everything you said. I even contemplated remodelling him completely. However our time layout makes things difficult. We did however make a few changes, some of which you also suggested, but because I did it last night I haven’t looked at the other suggestions you made yet. But thanks for your suggestions. The cartoon you posted was actually one of the references that I used

Here’s some more changes which I did last night. Still lots to be done, texturing will also make him look older. And I need to frizz his hair. 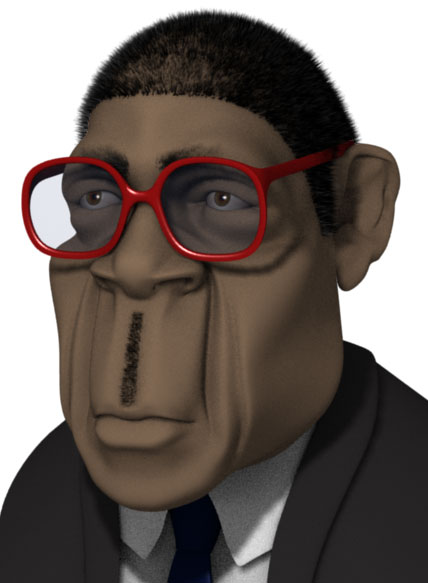 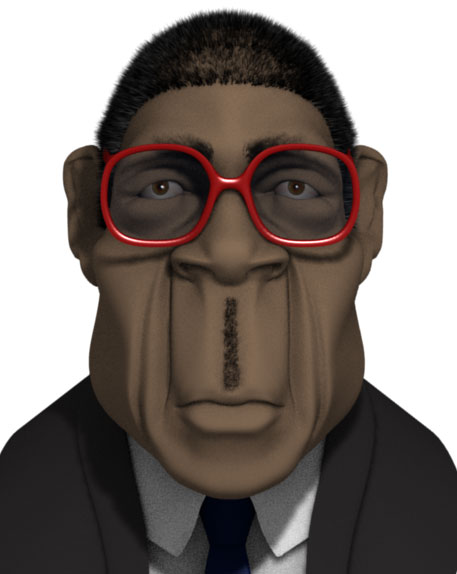 Ah, nice touches, that definitely is more recognisable as being him. The facial ridges are very characteristic, and I see you’ve made the eyes slightly more squinty and the chin rounder, as well as sorting out the eyebrows and flattening the face :). That 2/3 profile is the best angle to see it from. Good work man.

just read up on this person on wiki (who knows how accurate it is), seems like he is a very horrible person. should show him with a slight frown and give him more wrinkles, exaggerate his age.

Just a quick texture update. Still deciding how dark to make the skin.

Thanks for your reply drhavanger. 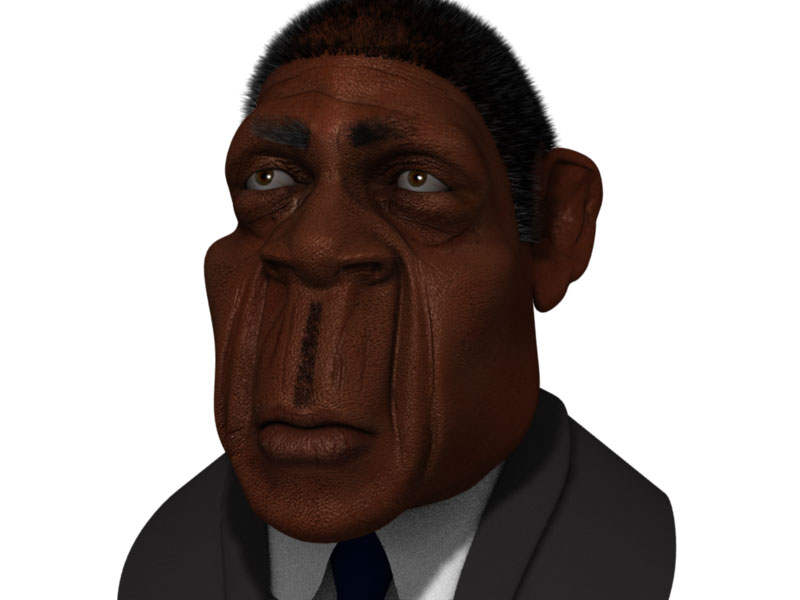 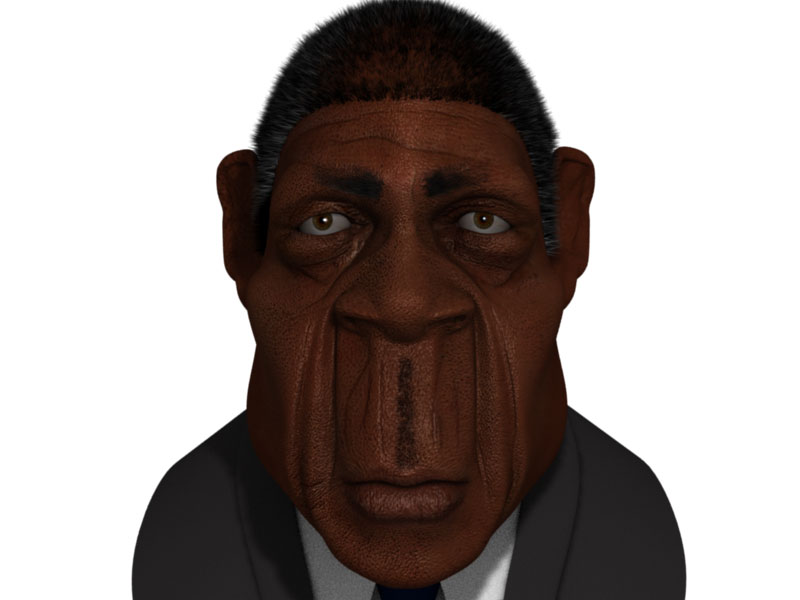 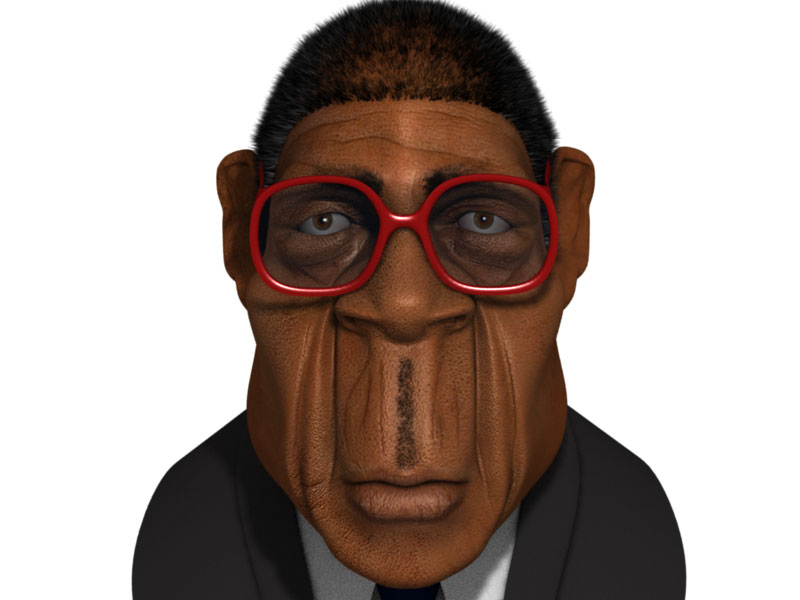 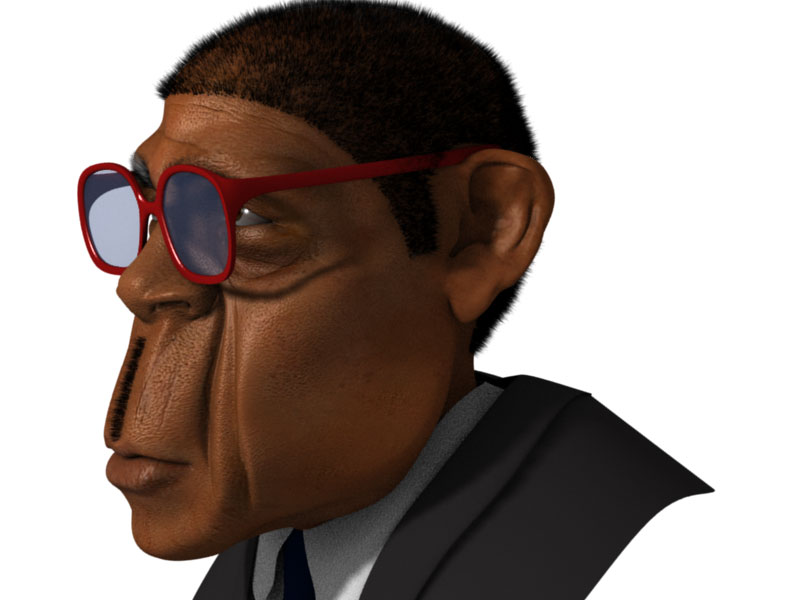 Looking good. I do prefer the second, lighter tone, although it could be darkened somehow. The first one, while darker, looks redder, which makes it more akin to a very dark native american skin.

Wow! Looking good! I like the lighter tone as well. Nice texturing, and now he does look aged. I’m looking forward to seeing him move

i like the darker tone one, but they are both good. i like how you put some gray hair in too.

Hi guys, thanks to everyone who replied and thanks for your suggestions.

Here’s some more updates, personally I like the lighter skin version as well, however, Mugabe does have very dark skin so we opted for the darker version. Here’s some hands as well.

Thanks for looking
PS

The following changes were made to the head ( I just need the lower the bump on the ears):
• Frizzy hair, including a receding hairline at his forehead.
• Added wind forces on his specs’ arms in order to not let the hair “grow” through the arms
• Changed the specularity to make him look more sweaty and also increase the contrast
• Slightly modified his skin material’s texture to be able to darken his skin (see Map To tab for diffuse texture - Darken as opposed to Mix. Col value at the moment set to 0.8)
• I also increased the value of his face’s bump map slightly
• Changed the glasses - but that’s a very subjective change. Maybe you prefer him to rather have lucky packet glasses. (I did not spend much time on the golden colour)
• Dark rings around the eyes - as new texture (not sure whether it’s dark enough?)

The following changes are due to be made to the hands (including more work on the texture, need to make the bottom of the hand lighter):
• The fingers tend to not be of the same “family”, i.e. apart from the middle and index finger, they look very dissimilar. These 2 fingers become thicker towards the end, but usually one’s finger is thicker at the base of the hand.
• Which brings me to the second point: due to the above, I believe the space between the fingers - close the base of the hand - is is too large. Most people’s fingers tend to touch there. I’m not saying they must, because - if they don’t - it actually makes rigging a bit easier. One can then use "envelope"rigging. But I think they are too far apart right now. I think if this gap is smaller, the boniness of the pinkie would also look better.
It seems as if the knuckles on top of the hand may be a bit too rounded/soft, especially for such thin/bony fingers. 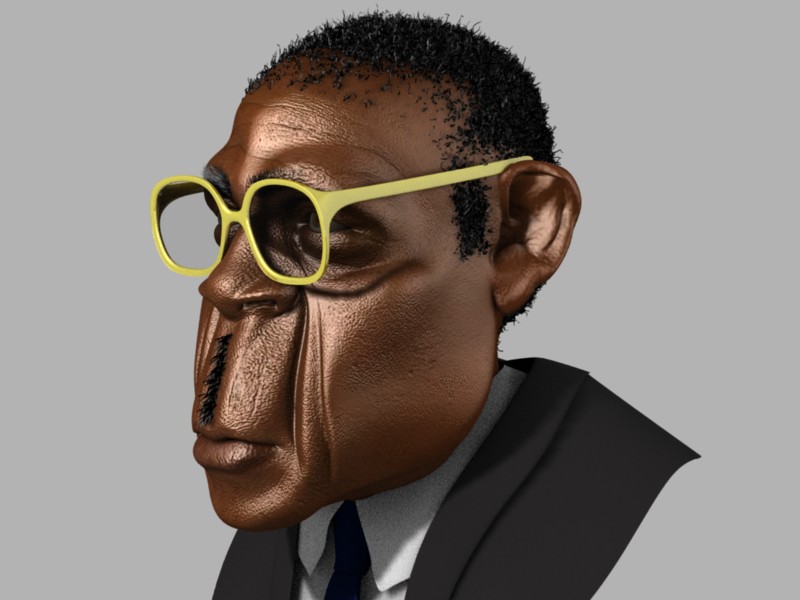 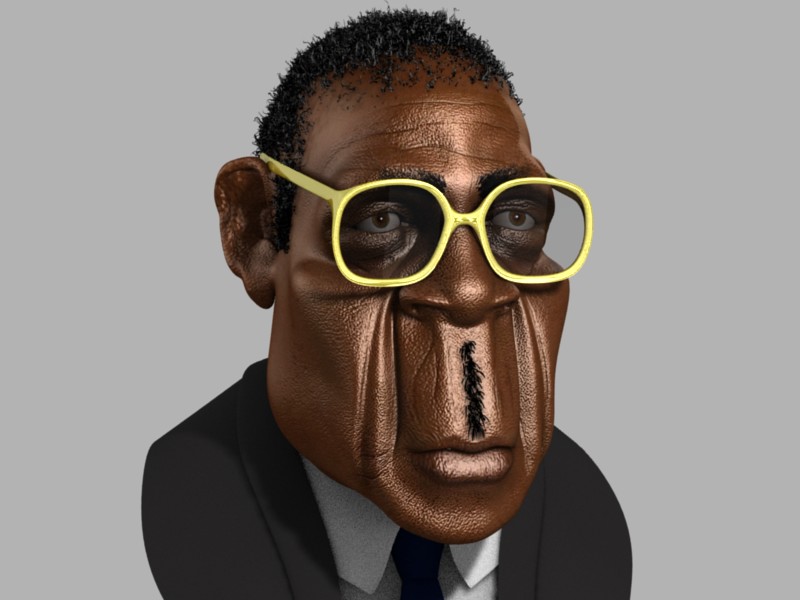 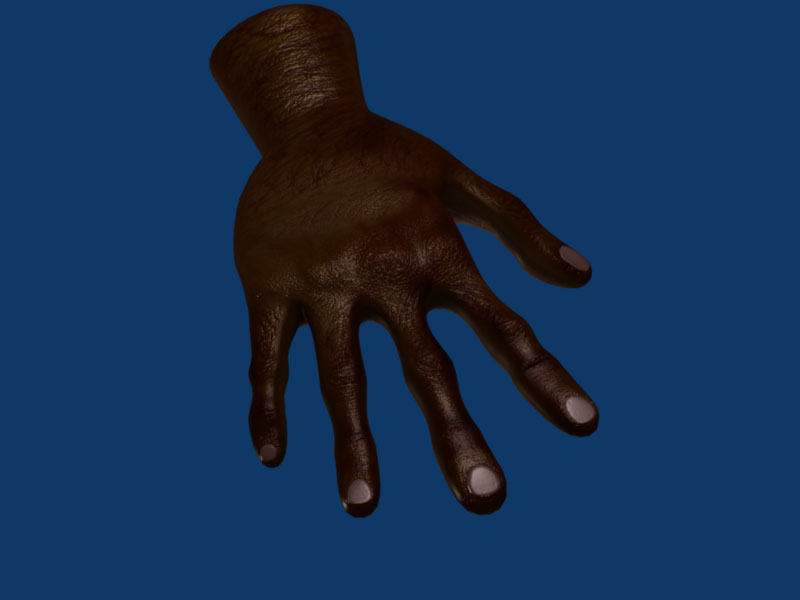 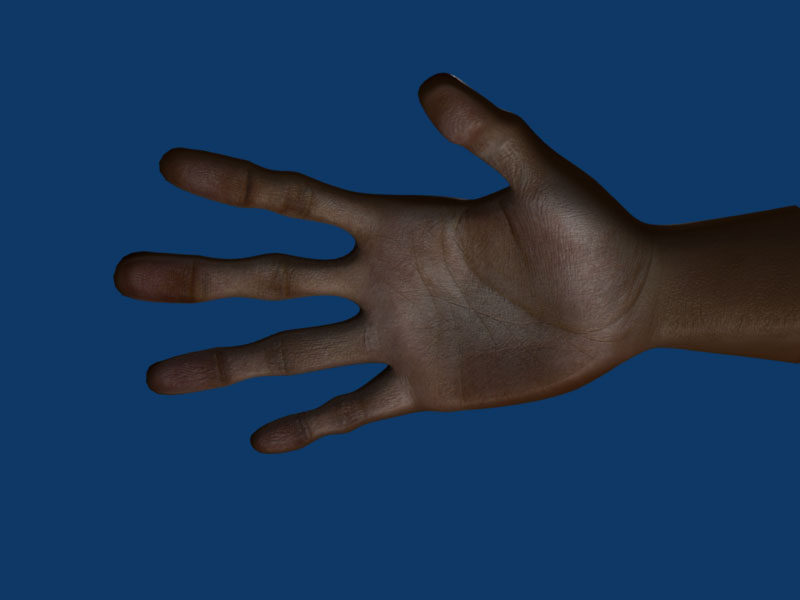 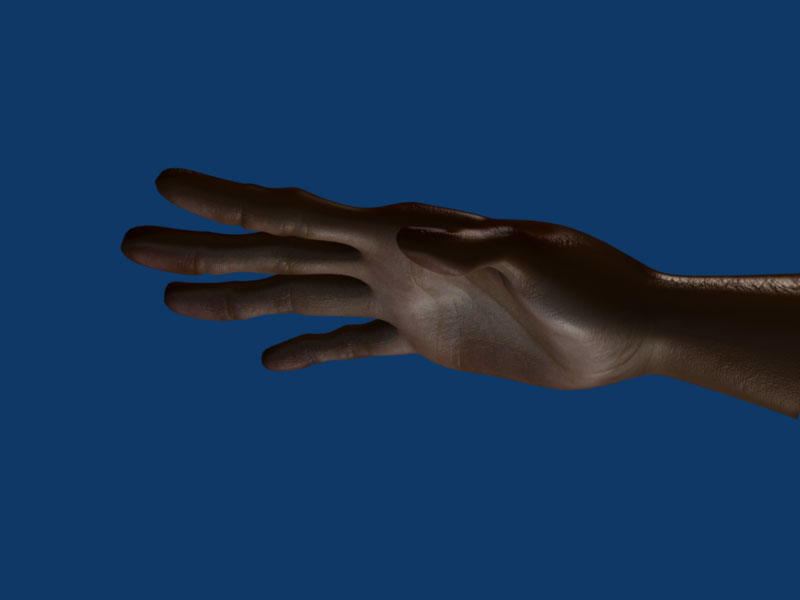 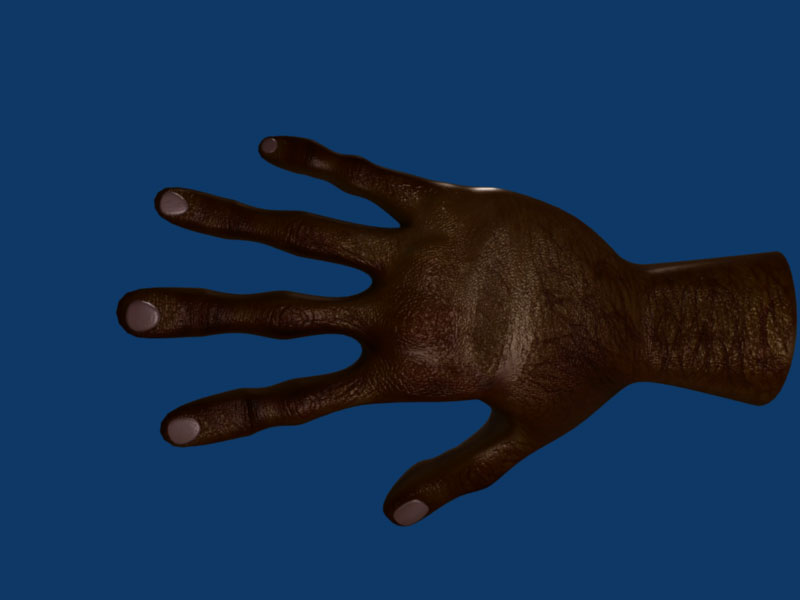 Here’s a screen shot of the hand’s mesh. 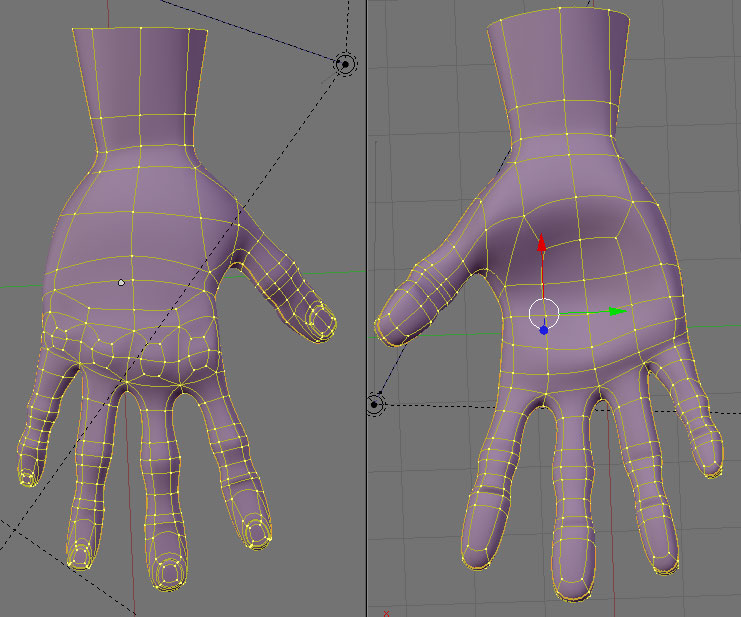 Nice! The bottom one looks more Mugabish. His glasses always look larger than life, when I see him on the news. Maybe, exaggerating them might be good. Anyway, good luck with your project and keep us informed.

Really good stuff! Reminds me of a Spitting Image puppet. 3D isn’t used for charactature nearly enough. But for this to work the script and voice-acting (impression) have to be as good as the 3D work and animation.

Here’s some more updates, I left out the hair, I had problems rendering it but it will be added in again later. 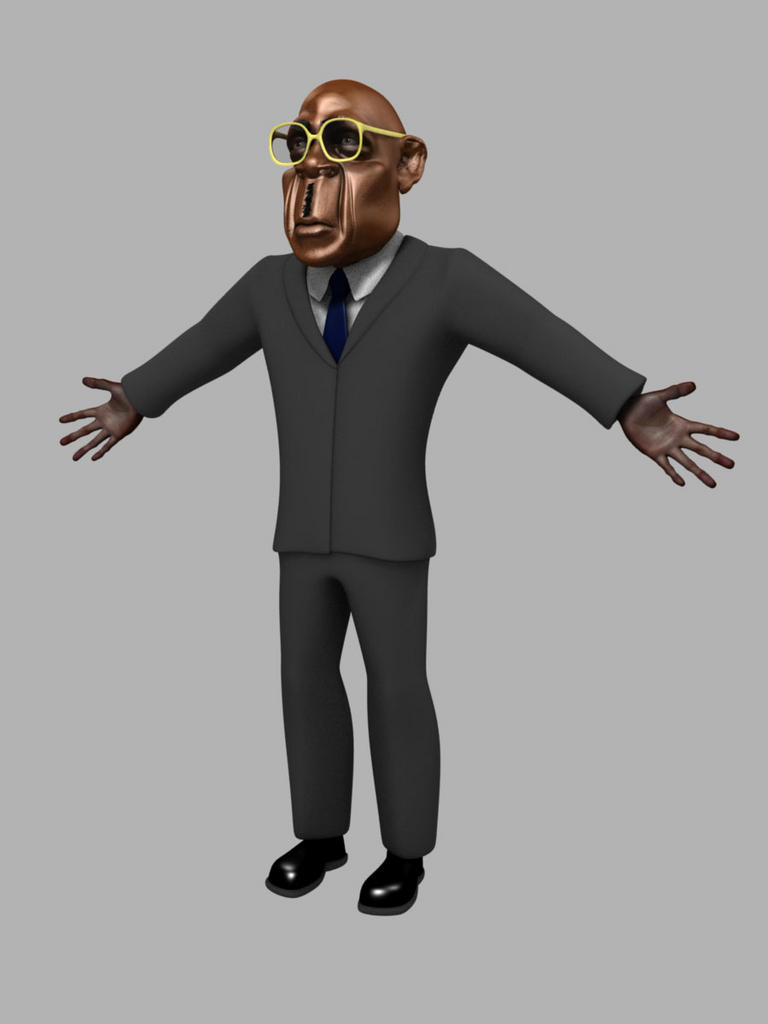 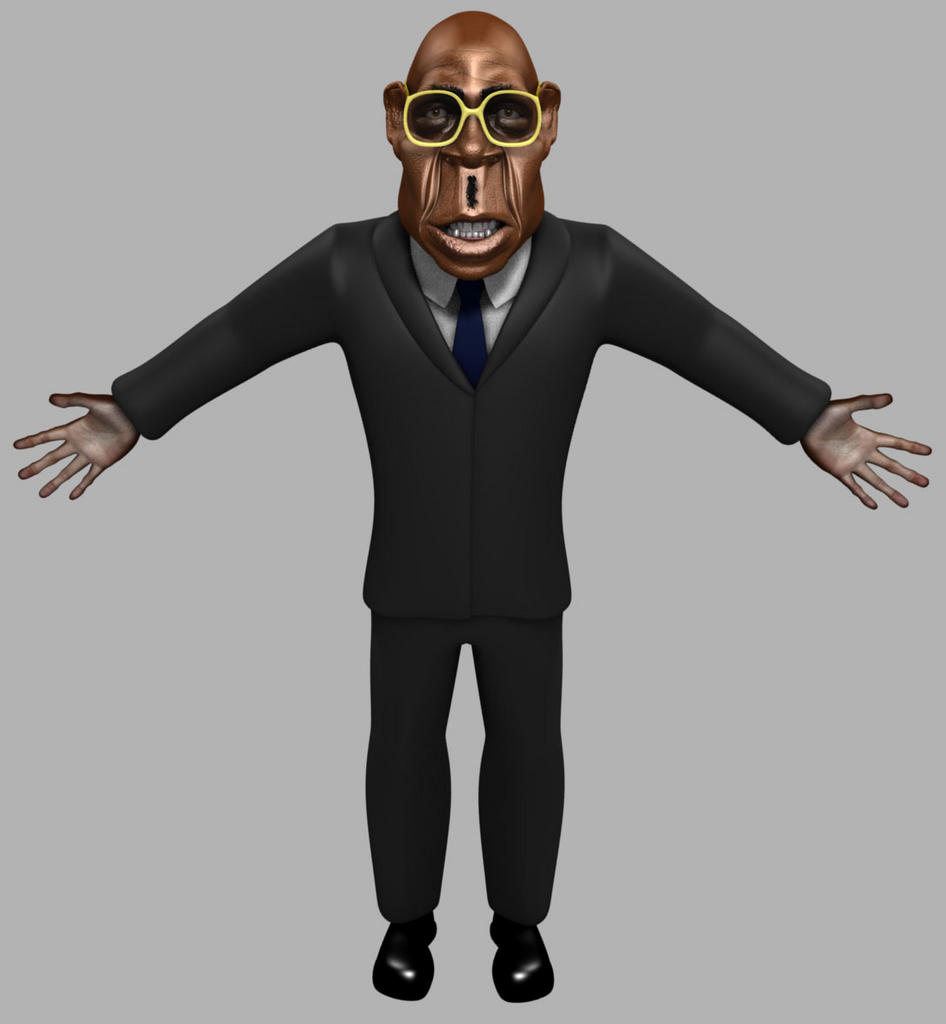 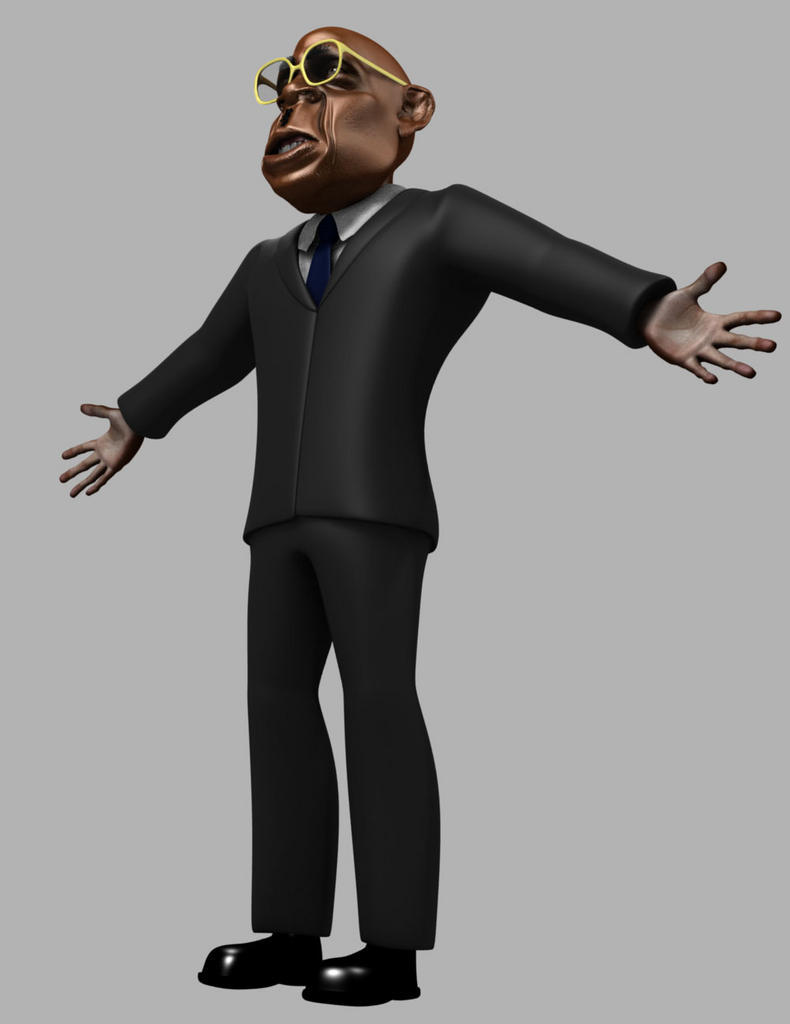 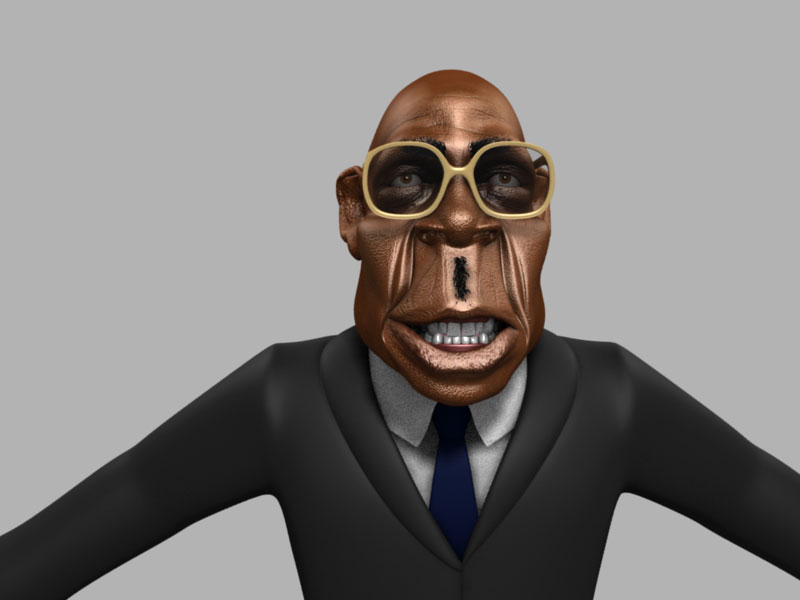 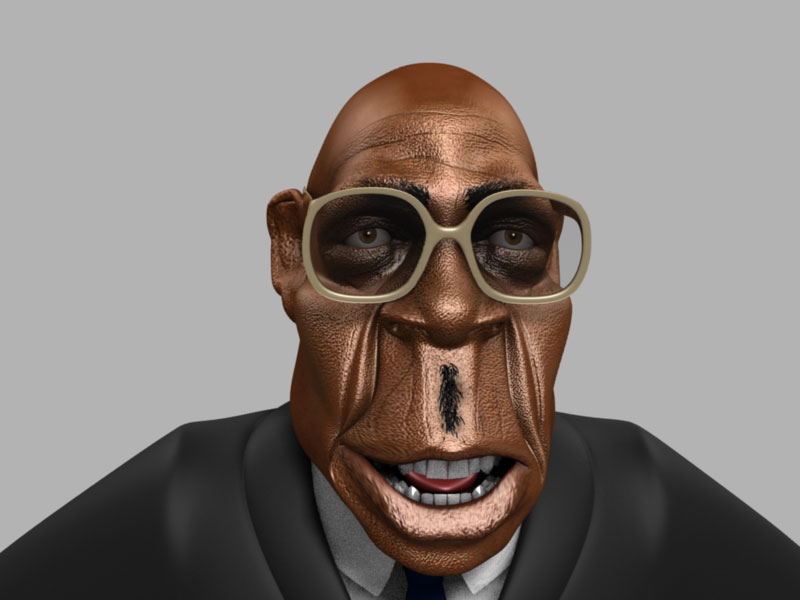 This is looking fantastic!!! The only problem I can see is that their is some texture stretching around the mouth in the pictures where it is open. Other than that it’s great, keep up the good work.

Yea the texturing around the lip and the ear are off a little. But other than that it looks great! Can’t wait to see this done!

Yea the texturing around the lip and the ear are off a little.

I disagree. it all adds to the characturishness.

I’m not quite sure about the shineyness though - I tend to use a spec map (maps how high the spec value is) rather than a bump map for the celular texture on skin -using bump only for the wrinkles. You could try using the current bump texture for both?