My YouTube channel “Classy Dog Films” recently passed 1,000 subscribers, and I wanted to do something special for our Blender fans. I decided to try something I hadn’t seen before, a rigid body car simulation. It took approximately 250 hours to render, with over 50 hours spent on the final shot alone! And for anyone interested, there are exactly 1,002 cars in the final shot. Thanks to everyone who contributed to the development of the project in the WiP thread!

Here are some shots from the video. 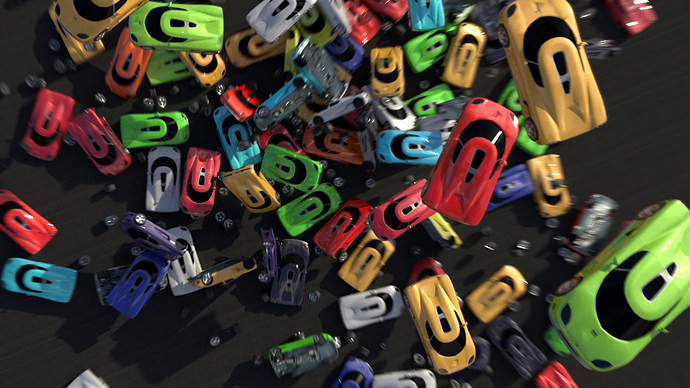 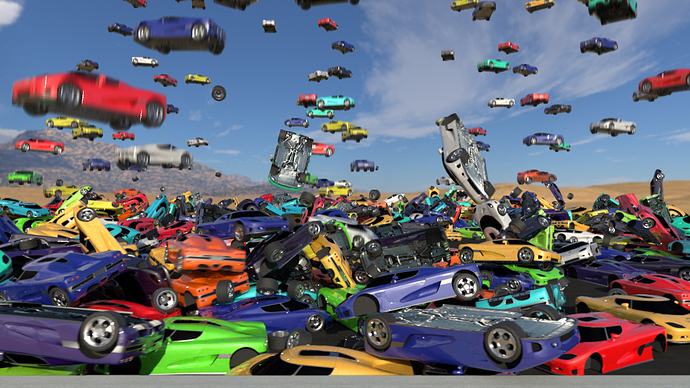 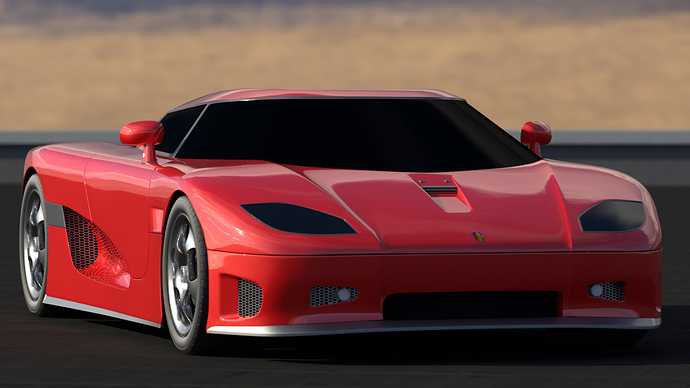 I’ll discuss some of the technical challenges involved in detail after I get some sleep! Thanks again to everyone for subscribing and supporting Classy Dog!

Woah! Came out great James, and congrats on the 1,000 subscribers!
Aside from the animation, some of those car shots could stand alone as they are, well done!

It came out really great James! You had a really good buildup to the fall with a lot of great camera angles and moves on the initial red car. I think it was wise to just have a few cars fall in the first couple of seconds…then proceeding with the real downpour.

There were also some great angles and moves during the massive car rain. I enjoyed the top view with the camera moving closer down toward the ground. I guess my favorite of the bunch was the closeup angle that ran from :40 -:45.

I recall from your WIP there was concern about using lower poly cars, but I don’t think it ended up as an issue at all. It paid off as well with the extra work you did during the WIP stage of the underside of the car. Those were shown prominently during fall and during the flips.

I guess the only thing that could have added to the realism would be having the cars being dented upon impact, but based on the size and scope of this, I really don’t know how this could have been pulled off.

Great job on this subscriber celebration.

this is a great job!! I really like that each frame of your render looks pretty clean and good for this simulation.
You could also make a pancake with 1000 candles simulation hahaha xD.

much encouragement, and much succes!!

Holy crap that might be the best thing I have seen on this site. This deserves a 5-star rating!

That was cool! My favorite part was after the first few cars fell, and the camera looks up to see what is to come.

The time you spend with this really shows, James. Great job. I really think the choice of music was right on. Editing, awesome too.

Vicky - Thank you very much! I knew from the start that I wanted to make each shot as visually pleasing as possible, while still maintaining a consistent look throughout the sequence.

Harley - Thanks for the detailed review! I like the shot that begins at about 40 seconds as well. I had intended to add car crash sound effects, but the few I found online just didn’t sound right, it made the video seem worse, kind of cheesy. I looked all around the house for things I might be able to drop to record and filter the audio of, but nothing worked. I suppose this is a sound that requires big, heavy metal things to record. I eyed the washer and dryer hungrily, but quickly reconsidered that notion. Maybe next time.
You’re right about dents and scratches, that would have been great, but I just don’t know how to pull that off on something of this scale. I think it would need to be automated, like in a video game. I have another GTA video I want to undertake that will require those things, but with far fewer vehicles, so hopefully realistic damage is coming in the future.

Jose - Thank you! Your words are always very encouraging! I like your pancake idea, as well!

BjarkeDuDe - Thanks! I had the feeling some people would really enjoy the idea of the video, it’s certainly a bit extreme and different from the average project. Hopefully future videos will be even more insane!

Scotchtapeworm - Thank you, that is one of my favorite moments, too! That was also the shot I animated in preview mode the most as well (4 or 5 times, I believe), in an effort to get the timing and positioning just right.

Frobenius - Thanks, I was very happy when I placed that song on the track to try it out! The timing was very good even before I started trimming shots to better fit the music (a painful but necessary task). If you ever want to use it, it can be found on Machinimasound.com here: https://machinimasound.com/music/the-end-of-mankind/

Thank you for all the kind replies, I’m delighted to see that people have enjoyed this video. I’ve decided to invest in another GPU so that I can render videos faster, and thus upload more often. I believe I can maintain an upload schedule of a new video every two weeks now.

Some technical info: I was only able to render a maximum of ~150 cars on screen at a time, so for the final shot, I set my camera up and did my best to guess where the cars would be, then positioned, simulated and rendered each tower of cars separately. Because the platform they landed on was a square, I just divided it into 9 areas, and restricted each of the nine simulations to a seperate area. I made sure to leave enough room for flying wheels to escape their area and land in another, though, as I felt this would help to make the shot seem less “staged”, so to speak. All told, the combined passes would add up to 37,000,000 vertices.

To composite the cars, I rendered out two different passes from each simulation- one of the cars themselves (with alpha background), and one of the ground and shadows of the cars. Layering the car passes is straight forward. To combine the various layers of ground and shadows, however, you need simply stack all the ground images and set their blend modes to “Darker Color”. You will want to make sure you’re rendering as noise free as possible, however, especially if you’re blending many layers.

Congratulations! both on passing 1000 and for finishing this up! You’d better get that 2000subs video coming soon…
I don’t know what else to say other than it turned out great! keep up the great work, it is always inspiring and educational to read your wip threads.

I don’t even want to think about a 2,000 subs video! I think I’ll wait until 10,000, I need time to make regular videos! Thanks for the encouraging words, ctdabomb, and I’m glad to hear you liked the WiP threads! I plan to continue doing them, as I hope documenting the process will be helpful to some people. I’m a novice, not a pro like many of the great users here on this site, but I like to think that my work may help people in the early stages of their CG development.

Just for you (and whoever else may be reading), these are some of the topics coming up in the next few months on our channel- bullet time tank, high res human head and body scanning, minecraft in real life, and GTA cheats in real life. I’ll be sure to make some threads for those projects as they come about.