I think rmb-selection is good, because both mouse buttons wear out the same way. looked at the total usage of my computer.

And it makes no difference to LMB-selection.

For professional software like CAD there is no standard, too.

Because in those other applications, selecting things doesn’t constitute half the work like it often does in Blender, and so Ctrl-A is too slow and too uncomfortable to use.

By the way, what happened to the Tab pie menu again? I thought that had been settled?

The “official” pie menu addon that had it also errors out

It got switched back to Ctrl + Tab. I think the reasoning was Tab (Hold) + Drag-Mouse was slowing down the Tab (Tap) Toggle for Object/Edit Mode. Didn’t feel snappy and was easy to mistakenly activate pie with a mouse move.

So right now, Tab = Edit/Object Mode Toggle, Ctrl + Tab = Mode Pie Menu. Can set it up to work with Tab + Drag-Mouse but again, need to tinker with input settings.

Here’s a small diagram I made in-case you want to try it out. 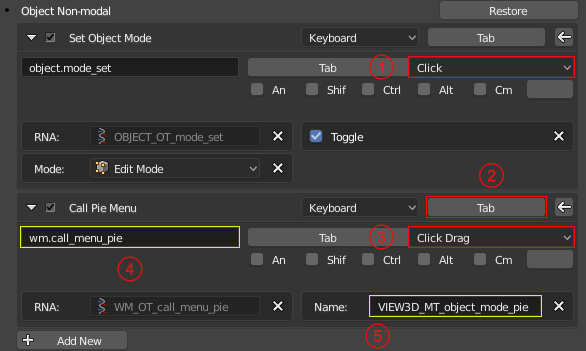 Do you know whether the standard pie menues will include a customization option or the option to create own pie menues - especially pie menue entries?

I’d totally love it if they do.

But the extent of the official pie menus has mostly been only to enable/disable in the add-ons menu and to change hotkeys in the input settings. There was talk about it for 2.8 a while back, but I’m not sure if the Devs are still considering it.

But honestly, we could really use a more streamlined & modern Hotkey/Pie Menu Editor for 2.8 and beyond. Trying to change the functionality of a single key’s function across everywhere it’s mapped in Blender is such a chore atm. And if you don’t know what you’re doing, you can seriously mess it up.

And the fact that maybe the Keymap is embedded into a part inside the userpref.blend or some obscure script file inside the Blender directory makes it hard to just open up in script editor and just do mass ‘Find & Replace’ with. I’m sure the Devs have easier ways of doing it, but for the common end-users?

A more explicit method would be to use something like Wazou’s Pie Menu and edit the python code in it to add your own commands. Reason I say this is,

I’d totally love something like the A+ Pie Menu Editor by Roaoao, or at least a basic/similar version of it come with Blender 2.8 by Default. Here’s Hoping.

Pie menues can be such a speedboost if you know when to use them. For everything that is accessed only on occasion but often enough to justify a qick acces without using up more than one shortcut.

In Modo I have created a pie-menue for quick access to creating my four most used primitives, one for vertex normals, one for a quick mesh cleanup script, a batch renamer and one for pivot centering. It’s on one of the thumb buttons of my mouse and I use the thing all the time.
This is where I’d have high hopes for Blender: the customization! Modo’s custom Interface creation is powerful but … sub-par (in execution and even more so in documentation, IMO) … to be polite.

I really do hope that this is on the list of the Blender devs!

Very True. And I used to love using Context/Marking Menus in Maya, and to an extent went ahead and customized so much of it so that I could work fast and just the way I wanted to. I love the fact that there was a ‘Marking Menu Editor’ Build-In that allowed me to do it. And if I wanted to customize more I could easily open that specific .mel/.py file and edit the script.

I love that Blender 2.79 included an official pie menu mapped to hotkeys and then smart dudes like Wazou and Roaoao expanded upon that even more with custom add-ons.

I’m happy the Devs have decided to ship 2.8 with more refined Pie Menus by Default. Like ~ for View Pie, Ctrl + Tab for Mode Pie.

I’d love to see them include and expand more to operations that have multiple choices that can easily be mapped to a single key via a Pie Menu. – Pivot, Grease Pencil/Sculpt/Texture Paint Brushes, Shading, Etc are some I really love to have built-in pie menus for.

They’ve done a pretty good job with the Default Keymap so far and from what I’ve seen in WIlliam’s Proposal/Task for the Industry Standard Keymap. That would definitely ease new users into Blender too. And even address some growing pains veteran users have had with the keymap for a while now.

As much as I love using add-ons and supporting the creators, something like Pie Menus at least in a very basic and functional standpoint should be included with the default keymap. What we have so far in 2.8 is good. But there are still some operations which have multiple options that can easily be mapped to a single key or a modifier + key combo to make it so much easier.

Let’s see how it goes. But a well refined and thought out set of Pie Menus will definitely Compliment the new Default Keymap. That’s just my honest opinion though.

Copy the style of other software is not better. Because they work in another way.

In advanced tasks, that’s true. But in complete basics, no. You select and interact with stuff in Blender exactly like in any other 3D software. There are no other differences than the keyboard and mouse buttons those actions are mapped onto.

If you think that selecting several things to edit them is something that only happens often in Blender, you’ve never used Excel, or worked on documentation or worked in any other DCC application where you are basically selecting and unselecting things all day. Blender is not special in this regard nor does it need to treat the problem as special.

Just because those other applications have poorly chosen shortcuts, doesn’t mean Blender should too.

I agree. I think most programs handle this poorly. Folks argue about “standards” as though there was some meeting where every company got together and decided what the best shortcuts for commands should be. The reality of the situation is that it is simply easier for developers to copy the shortcuts of other programs when they add similar features. The fact that there are so many differences between their keymaps shows this.

If they really cared about making things easier for users who use their product along side other tools, then they really would have gotten together and created an actual standard they could all strictly adhere to.

Now as far as selection goes, I think blender was on the right track when they treated it as a toggle. Other software should really copy blender in this regard, not the other way around. I can only hope that the new default keymap treats A as a toggle again before it hits stable.

Yup.
More to the point, the Ctrl-A shortcut was born of the necessity to keep the single-press keys free for typing text. This was the whole point of the Ctrl key.

But in Blender you don’t type text.

except when you type text (text tool, console, scripting, etc)

Which are each contained in their own context.

In autocad, I added some hotkeys, only to discover that they trigger during typing text. Appalling.

The way I see it, everyone will be using the industry standard keymap once it is established. So no point fighting hard.

How would one bring back the old functions for “Z” , “.”, “,” on single press, and keep the new useful pie menus on hold?

I tried changing the shortcuts myself to what Blender 2.79 had but I’m getting errors.
The extra step of the menu, while functional and consistent with the rest of the interface is adding me an intermediary step for functions I use A LOT and slows the workflow down a bit…

EDIT:
user dpdpforlife posted a perfect solution to this here:

Add an option for different behaviour for Shortcut Press and Hold in the...

The addition of the pie menu for Z, period and comma really threw a wrench in my workflow. I do think they're great and a huge improvement, however I personally am feeling slowed down by the additional steps. We do see different behaviour on key...

The command “Center View to Mouse” is missing from the new keymap (used to be Alt-F). Could you please bring this back? This command can only be used with a hotkey, because of how it works.

It navigates the 3D View (the pivot-point of the view) to the surface that the mouse is hovering over when you press the key. It is a very fast and efficient way to jump around your scene in 3D. This means it is not inside any of the menus, and is not discoverable. If you remove it from the keymap, the command is basically “deleted” from Blender.

edit: the command is “view3d.view_center_pick”

This command is really crucial and it’s a shame it’s so hard to discover for new Blender users. It’s really one of the core components for navigating the viewport and I have it bound into one of my few and precious mouse buttons. This combined with view3d.view_selected (also on a mouse button) make navigating really fast.