I am brand new (a week or two) into Blender. I’m trying to animate a chess set coming-out soon and need a little help with rigging (who wants a discount?).

The chess pieces are kept on a platform that swings out from inside. I have looked at posts and videos, but nothing is making it into my constrained limited brain. A few images show the various progression of the platform as it’s meant to rotate. The image showing the rotation limit constraint is meant to show that no matter what I put (-180 to 180 in this case) for X rotation limit, I cannot get the platform to rotate in the quadrant where the circle is.

Any help is much appreciated. I hope I’m not breaking protocol by posting this here. Thanks! 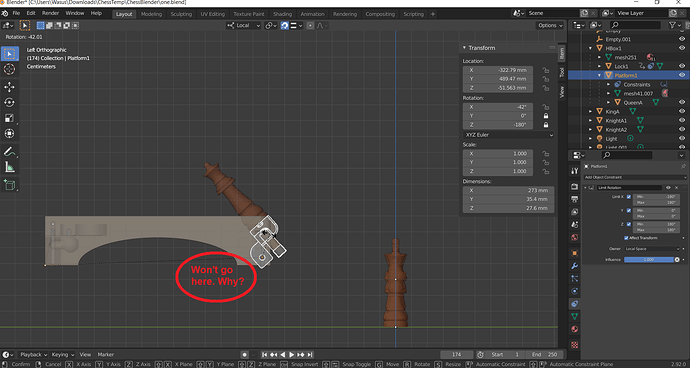 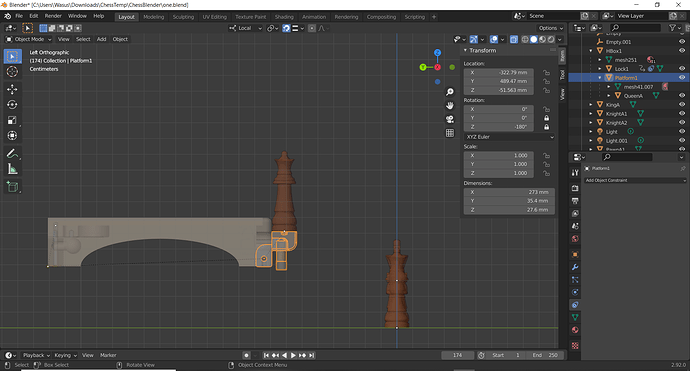 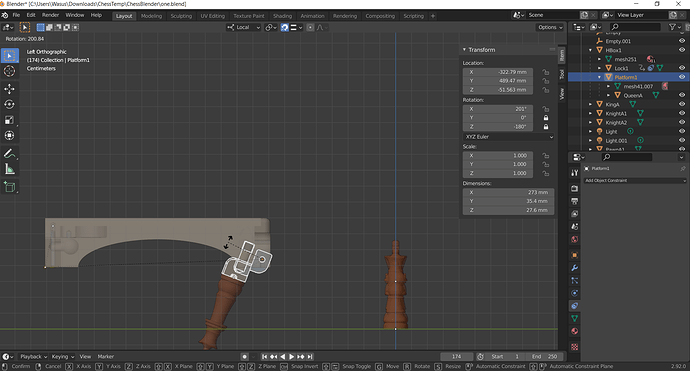 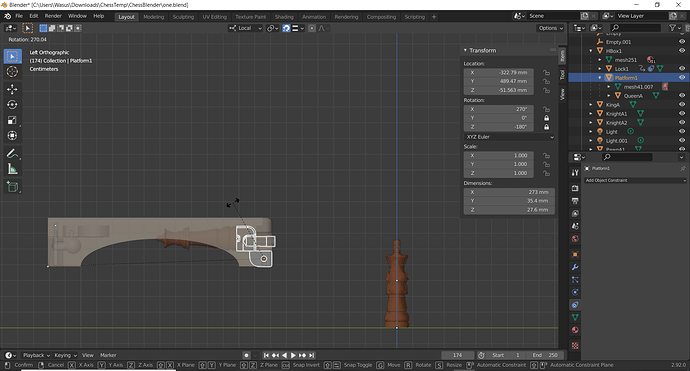 Hey, welcome to BA !!
Constraints are limited to 180 degrees and just a small bit below that for usefulness. Just decided where (on which axis/plane) you want to start and or end.
Just one other thing could be effecting your rotation - the L/D const is set to ‘Local’ space (which is prob what is needed) but without knowing all the other info it could be possible.

Thanks for the reply. Here’s a close-up of the settings for the constraint. I have the limits set from -180 to 180 just for demonstration and the object rotates only in 3 quadrants. That shouldn’t ever be the case with -180 to 180, correct? 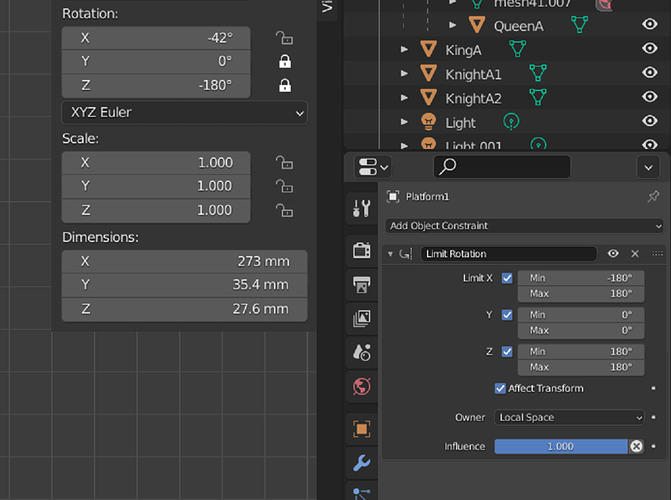 Your Z limits are set to 180 to 180, not -180 to 180. What you’re demonstrating should rotate only in its local X axis and be locked in its Z and Y axes. If it’s an XYZ Euler transform, it should be rotating only in a single plane.

Overall, limit rotation constraints are probably the worst constraints, and there are a lot of gotchas. Most beginners don’t have a great understanding of Euler rotation, which is something that seems intuitive but really, really isn’t.

For more intuitive angle limits, I would recommend using IK (single chain IK) with IK angle limits. This requires using an armature though-- there is no IK object constraint. Other alternatives to limit rotation are to use damped track or locked track constraints, targeting something with a limited position (via limit location, or shrinkwrap, or whatever else you can think of.)

I only want it to rotate around the object origin’s x-axis, in a single plane. I can rotate it 360 degree and lock the Y and Z without the constraint. As soon as I add this constraint, even though it should rotate 360 with these settings, it rotates 270, but not the 270 that I need. I say with hesitation that I think it’s a bug. I’m new to Blender but not new to 3D CAD and constraints in general.

I’ll try to re-import the objects and re-join in a more logical fashion. If that doesn’t work, I’ll try damped or lock track constraints. The armature sounds a little advanced for me at this stage. If you have any other suggestions, please keep them coming.
Thanks!

If what you want is for something to rotate in a single plane, around 3/4s of a circle, point that something directly away from the middle of its forbidden rotations, apply rotation, and give it a limit rotation constraint of -135 to 135 in X, 0 to 0 in Y and Z.

Yes, it is confusion how I have presented it. I tried to show how I need it to rotate and then show how the limit constraint limits the rotation even when it should not. Would you agree that it should be about to rotate a full circle in the one plane with -180 to 180? If it cannot do that then there is no possible way for me to get the rotation I need.

It should be able to rotate a full circle with -180,180/0,0/0,0 limits. My personal test (just to make sure I wasn’t insane) showed that happening. If you have a file where that isn’t happening, you should share it-- there are way too many potential weird things that people can do with a file or an object, and it’s usually pretty difficult to exhaustively list all of the possible reasons why something might not work the way you expect, in some particular combination of circumstances.

It sounds like you’re trying to work around some other problem with using 180,180 limits on Z rather than 0,0 limits on Z. You shouldn’t need to do that. It suggests that there’s something else weird going on that you’re not mentioning. Like a different space or something.

OK, here’s a simplified blender file with only two objects. You can’t Rotate it 360 degrees. Once I am able to do that, then I can rotate in the quadrants that I need. Right now it complete misses a quadrant that I need to show it rotating. Thanks for taking a look! I really appreciate it!

Set the object’s Z rotation to 0, or apply rotation on the object. Change the constraint to limit Z to 0,0. Then it does what you want:
HA-RotateLimitProblem1.blend (3.9 MB)

Like I said, don’t limit Z to 180,180. 180 degrees of Euler rotation is bad, particularly when it’s Z rotation in an XYZ Euler (as it is with your object and with any Limit Rotation constraint.)

Thanks! Whenever I had 0,0 in for Z limit it switched the object around. But that’s all fine since I locked it on 0. I don’t why it set to -180 to begin with.

So, yes now I can rotate it 360, but no combination of ranges seems to get me to the 270 I need: starting at 12 o’clock and going backwards to 3 o’clock looking form the Right view (after hitting “3”). What am I missing with this, if you don’t mind?

It seems (but I don’t know for sure) that a clock empty might be a nice feature where you can put a clock in and turn it any which way that defines how an item can rotate in a given plane.

Thanks again for your help!

What am I missing with this, if you don’t mind?

The file you linked rotates you through 270 degrees: 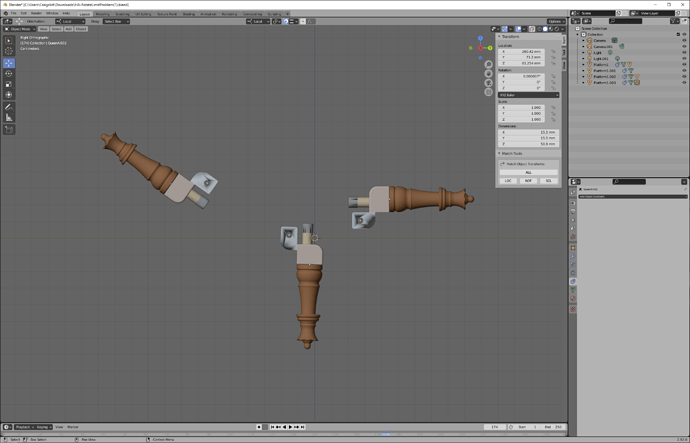 The instant after your rotation goes above 180, it rolls over into -180, which then clamps to the -90 degree limit instead of the 180 limit.

So how do I get the rotation that I need? There is no range of values that I can put in to get it, correct? Do I need to change the local coordinates of the object? Is that possible. Everything I have seen only talks about changing the location of the origin of the object, not the orientation of the object’s origin’s orientation. Thanks again!

So how do I get the rotation that I need?

The object rotates through 270 degrees in the YZ plane. That’s as much as you’ve said you wanted out of it. Is there something else you need it to do?

Yes! I need it to rotate 270 but through the area where it can’t currently.

If the rotation you want blocked is in the middle of the -180 to 180 range, you can do it most easily by rotating it so that it’s rotated into the middle of the allowed range, applying rotation via ctrl A → apply rotation, and then setting the angle limits to -135, 135.

It’s easier if you use an armature and bone parent-- then your object can keep its particular space, no need to apply rotation, and the bone can be limited however you want.

OK. I will learn how to do that. I really appreciate your time!!

OMG, I am a slow learner!! I got working. Thanks again!