Charizard: “Going back into that tiny ball? … No… Fucking… Way!”

This model here is (like others) an experimentation bench for me testing out various things in Blender or with my Game Engine. This time good old Charizard received some experimentations. I found a final scene setup to send off this guy into the “done” corner. I’m only mentioning here the parts linked with Cycles that are of interest. For the full description with the rest see the corresponding deviations.

HDR Compositing
Cycles can render Charizard well using shaders geared for Physically Based Rendering but only if you use a lamp. Lamps are though not interesting. Better are HDR Light Maps. I fetched some from openfootage. Getting HDR Light Maps working properly in Cycles is a problem especially if you want proper shadows. With some experimenting I found a working setup. The main problem though is that Cycles sucks hard at compositing a rendered model into a pre-existing footage, in this case the HDR Light Map. I had to experiment a lot until I found a solution to this problem. Simply put you need to render the scene three times once with everything, once with only the shadow blocker (what I call a fake plane aligned with the real world footage to catch shadows/lighting) and once with only the background. Then you need some complex node-work to blend this properly together and you get a Charizard properly blended into the background. I don’t outline it here unless somebody is interested in the setup. The nice part on this solution is that the light and shadow cast on the real-world background is colored by the model (here orange from Charizard). You can see this in the second scene. Now I’ve got a full staging setup working with Cycles as I wanted since some time. Left only one more problem.

Cycles Particle Fire using Smoke Simulation
Cycles can not do particles nor volumetric rendering but Charizard needs a tail-flame. So after some experimenting I found a solution to the problem. I created a fire simulation based on the Burning-Sphere example from Blender and created an additional layer for rendering. I rendered first the flame using BI. Then I stored the image as an OpenEXR including Z-Buffer. Then I rendered the real scene using a lamp in place of the flame to simulate the light emission and compositing as mentioned above using Cycles. In the Compositing nodes I then added the flame over the rendered Cycles image (simulating an emissive material without actual emission) before doing the typical tone-mapping and post processing.

So here it is, a Charizard composed into two sample scenes with different light setups. Once into some landscape at sunset and once into some kind of parking. Especially in the second version the light cast from the tail-flame onto the HDR Light Map background can be seen well. Both images are wallpaper sized as always.

Can you get him back into his ball? 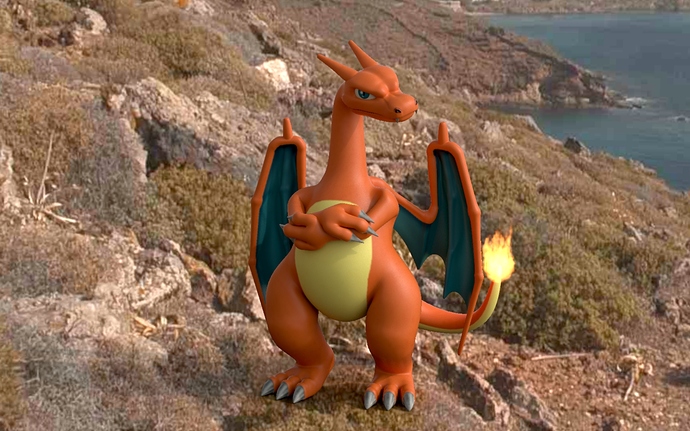 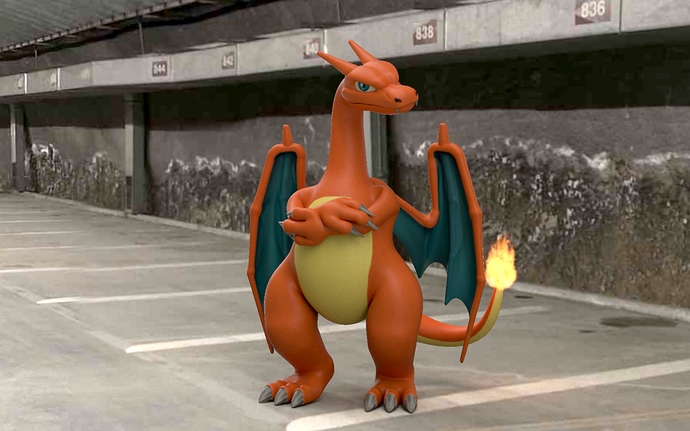 The second picture looks more natural. The first one makes him look too big.

I could be wrong but from looking at the full HDR Light Image I got the impression these are smaller bushes reaching to your hips roughly.

Either that or it’s the trick of the camera.

That’s very well possible. I had to move the camera around quite a bit in the second scene to not make him look like a miniature figure.