So we (which is more like an I at the moment) want the community to help me make this game. Why? Well I am one person, and one person can only do so much in a given amount of time. This would greatly increase production time and I believe it would make the game more fun and give it more creativity. Now I’m not asking for anything super special or over-the-top hard. I am asking you 3D modellers or animators out there to create rigged 3D character or enviroment for this game. Use your imagination, create something creative. Don’t think you just have to share it with me either. Share it with other people to on sites like Blend Swap or TF3DM too. I only ask that you follow these simple rules:

No mature nor graphic content with your characters - We are aiming this game for tweens and teens along with anyone else who wants to play it. We do not need any overly “sexy” nor disturbing characters. Also, no offensive characters either (Nazis, terrorists, etc).
Format must be compatible with Unity 3D - Obviously, if it’s going to be used in the Unity Engine it must be compatible, and most major 3D file types are.
No copying others people’s ideas - No copying. Period. That also means already existing characters like Mario, Sonic, Gandalf, Katniss, etc. That said, you can be inspired by certain characters. If you want me to use a cool model you found online, please give me a link and don’t give it to me as your own work.
Either your 3D format is compatible with Blender or you have to of animated it - I only have Blender at my disposal. So, if your model is not animated and it’s not a BLEND file, I might have trouble animating it. I would appreciate it if you could animate it. If you can’t animate your file, I will still take it and try to have someone else animate it.
Your model must be mobile game ready - No extremely high poly counts! Nor anything like 4k textures!
All that said, be creative! Immortal Battles is about putting together a bunch of diverse characters together. Maybe one person makes a wizard and another makes an assassin robot while another makes a steampunk time traveler. It doesn’t matter as long as they are appropriate.

Okay so now what’s in it for you? Well I can’t pay you (at least right now), so here is what you will get though. Your name will appear in the credits. You will also receive the test versions to play first. If I find it fitting, I might also use your name somewhere in the game (with your permission of course). Maybe I’ll even name your character after you. Also, if I ever make a premium subscription or a paid version of the app or game, I’ll give it to you for free, forever. You can put this game on your resume and of course you get to help make this game happen in the way you want it (in a small way).

If you want to make 3D models message me! 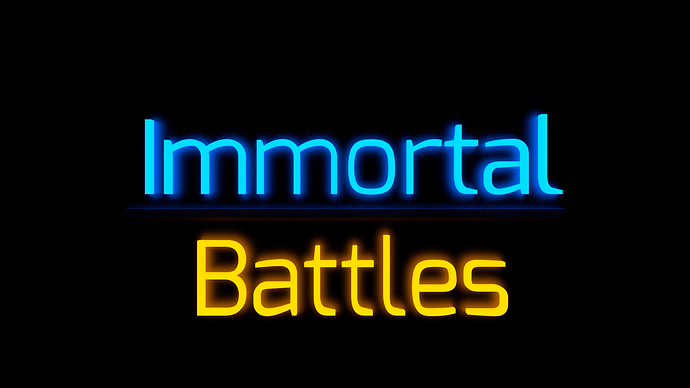