INTRODUCTION:
I have three younger brothers who don’t know much about 3D art, and I myself am relatively new to character animation,
and I recently decided to learn to animate properly whilst also teaching my bro’s about how all this “3D stuff” works, by
creating a short animated film with them. Its quite an effective setup really, since we are all in the same house, and we are
able to communicate very well (perhaps even better than in a ‘professional’ studio), like if one of us sees something that can
improve we don’t hesitate to point it out and critique… for example I’d be working for, like, 5-6 hours on something and my younger
bro will come along, point out some major flaw and say: “Dude, that’s looking off. You don’t seriously want to put that in the movie do you??”,
and I’m like: “AAAAAARRRGHHH!”… So yeah, we don’t really have any trouble voicing our thoughts and opinions.

Anyway, the main purpose of this project is to learn the art of animation. We are all n00bs,
and we decided to just make something fun and not stress to much about the quality of the work.
I do, however, want to at least set the bar high enough to be a challenge, 'cause its no fun if there isn’t a sense of
accomplishment at the end of the project.

Neil is second eldest (14), he specializes in digital sculpting and asset creation. He’s a comedian/clown, probably the funniest person I know.

Francois is third (12). He’s also into modelling & sculpting. He draws well for his age and is also our official concept artist. XD

Joshua (Jos) is youngest (10) he does 2D drawings & Designs. I guess you could say he’s our texture artist, but he also does 3D sculpting.

We started with storyboards and pre-production in April, and we are now almost ready to move into animation. All four of us are going to animate.
I’ve uploaded some screenshots and renders of our work so far, and hopefully I’ll be updating this thread regularly.

THE STORY:
The story is very basic and straightforward, with a few gags added in

Basically it involves the antics of an overeager-and-not-so-bright astronaut who arrives on an alien planet with the intention of
gathering rock samples… The story is partly inspired by the animated movie “Planet 51”.
Anyway I don’t want to give away anything, so you will have to be content with that for now. 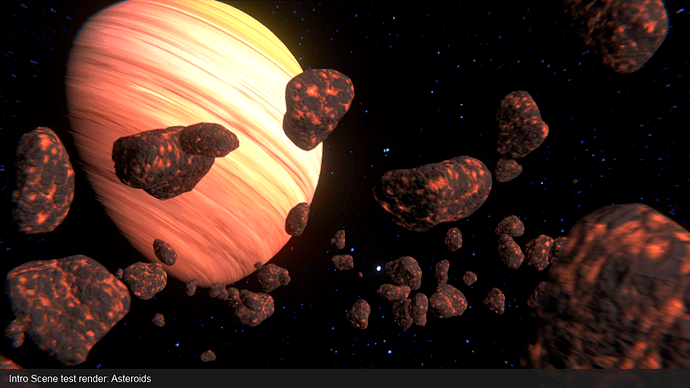 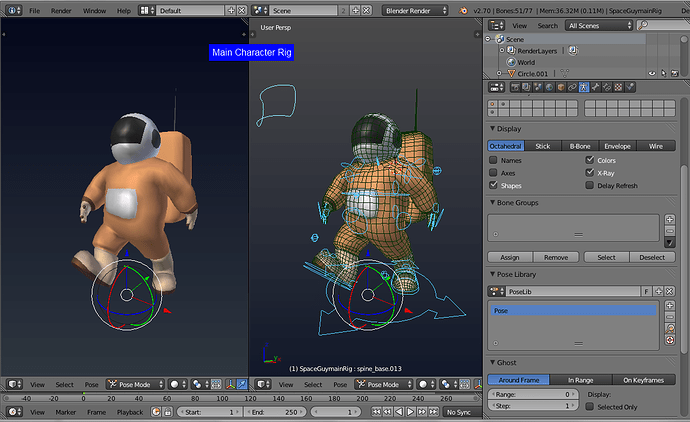 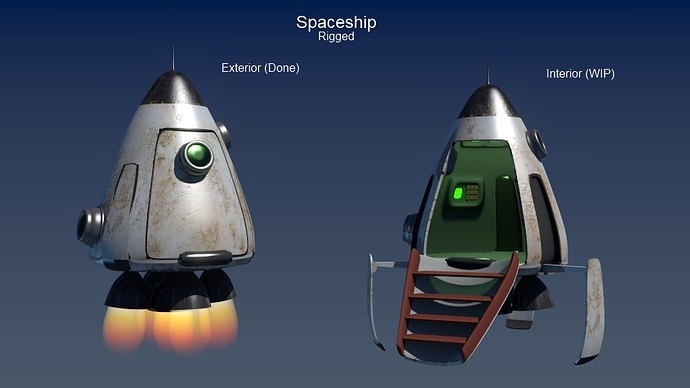 Please feel free to critique or comment, but do keep in mind that lots of this stuff was created by young kids with no real experience. 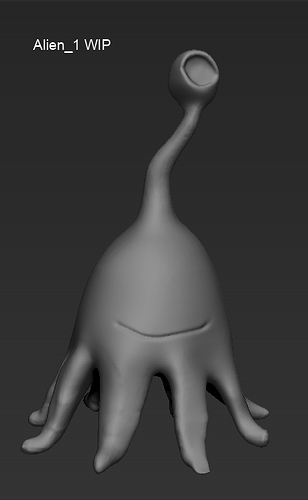 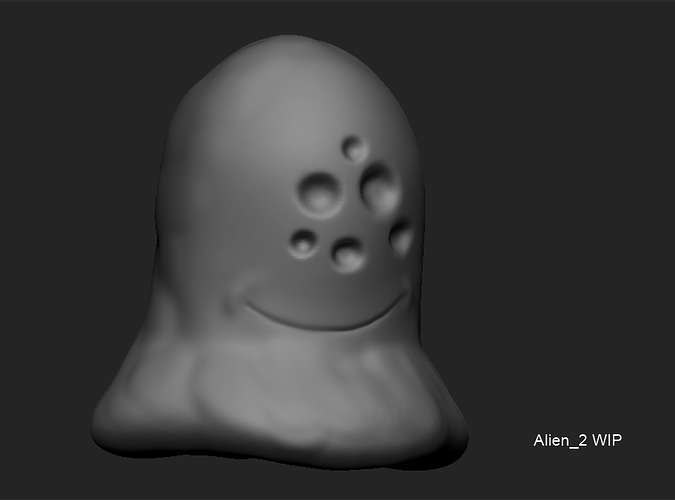 Here’s an update for today: 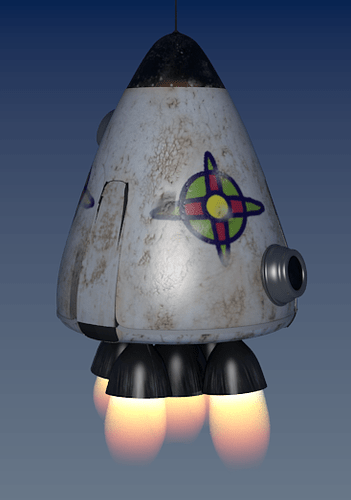 Jos, our texturing guy has made a nice logo and to put on the side of the ship. We are still debating whether to put in some words like
“Rock Sample Collection Corps” or something silly like that lol.

Jos still has a lot to learn (I mean seriously, he’s only 10 yrs old. :P) but already he is showing potential to become a skilled
texture artist. I walked him through the basics of texturing, and how many textures you see on 3D models were mapped on using UV techniques.
I also explained to him how a typical UV map works, and he grasped it quite easily. I’m now showing him how to properly paint a UV-Ready texture
in GIMP and how to tweak it in Blender. Its a bit risky trying to teach a 10 year old kid stuff he would normally only learn in highschool/university, but hey it seems to be working! Kids aren’t dumb or ignorant, If a small kid can play games like Minecraft or Call of Duty, then he is definitely able to learn the basics of the techniques that are used to create those same games.

That’s all for today.

This is a great idea, for so many reasons! So far it looks good!

Man, this is AWESOME! I really wished my brother and I had tools like this when we were kids! Make it happen!!

This is nice so far, wish you to achieve your goal

reminds me of ksp, keep it up!

thanks for the encouraging comments!
here’s a quick mini-update (I’ll try to post a larger update later today.)

Francois has been designing some “screens and panels” for the interior of the ship… these will be mapped to emit-planes inside the spaceship. Francois has a very good quality when it comes to concepts and designs: attention to detail. his pen/pencil drawings are always incredibly detailed and well executed (perhaps I’ll post some in future updates.) he is now busy learning to draw on a computer instead of on paper, using vector based software like Inkscape, and also softwares like GIMP/Photoshop. I told him to use his imagination for this, and while its still WIP, you can see he has definetly been using it lol.

the rest of us haven’t been idle either. I’m busy retopoing/rigging an alien character which Neil sculpted, and Jos is busy texturing it. I’ll be posting some screenies soon.

cheers and thanks,
G

We have been busy over the weekend, mainly modelling/texturing this guy: 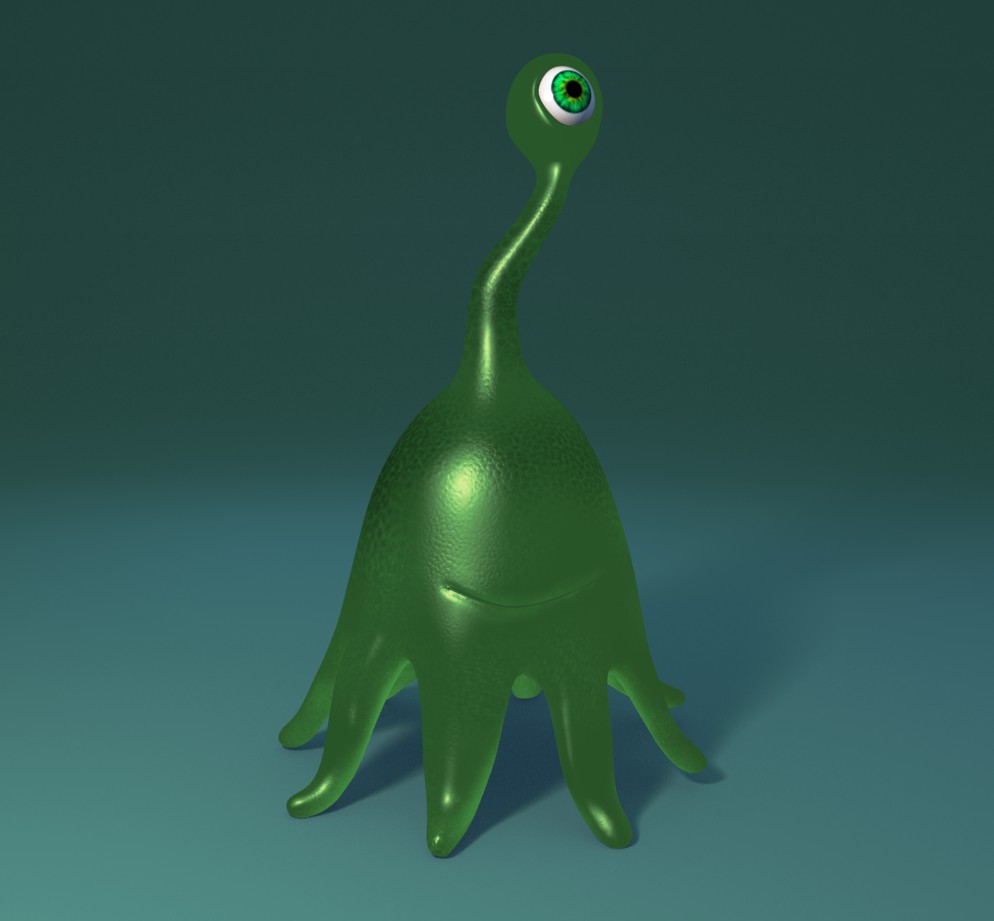 we are busy doing some small stuff like props for the main scene, and when that’s
done we will get all the scenes and shots organized to begin with animation. yay!

But maybe his “eye’s arm” needs one or two more bones, so that it bends smoother…

@Nunud,
thanks man. yeah the Rig of our alien character still needs some work, but luckily its a simple character so we won’t have any trouble with it.

As for our update today:
here are some various screenshots of mostly concept art and some props we are busy modelling. I have this idea to teach my bro Neil the ins-and-outs of modelling in blender… since he only has experience in sculpting at the moment. I thought I’d start him off with some simple stuff like in the screenshots below. enjoy! 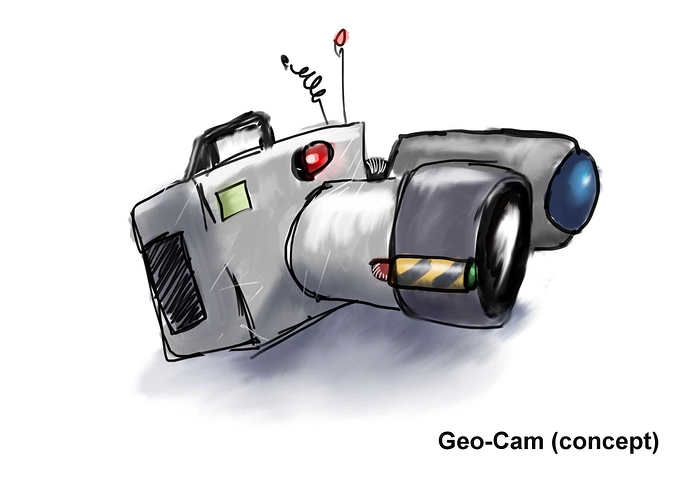 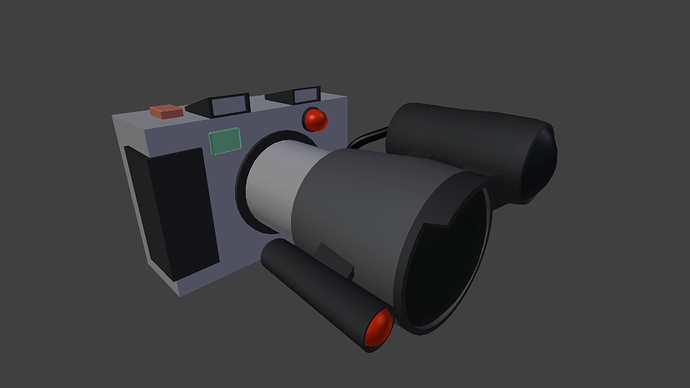 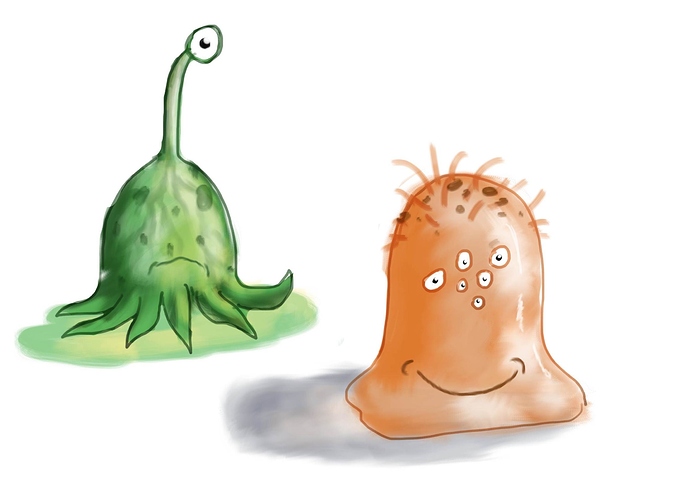 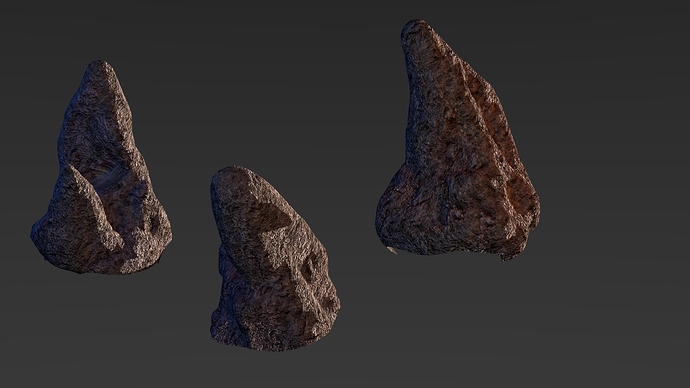 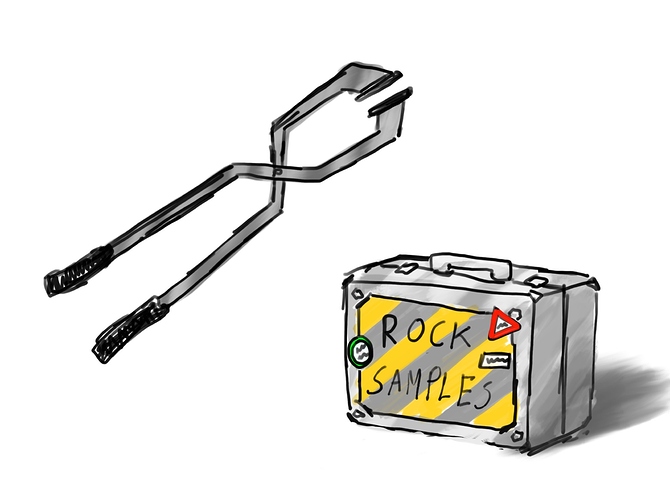 dude, im in love with all your bits that your up to and if i wasnt so busy id of loved to help out

im quite jelly at the mo lol
(jelly = jealous, u gotta get with the zingo = lingo)

This project is awesome. I love that I’ll of your brothers are working on this and they all have specific skills that your taking advantage of. All of you models look quite promising to me. I’ll be watching this.

Cool! I’m subscribing to this thread!
That’s really great texturing for a 10 y.o.! And everything else is looking really nice

That’s wonderful to create it with your brothers! I have 4 brothers as well and I’ve been lucky to work professionally as a musician with 3 of them until now, and it’s awesome! Keep it up!

Just a lil bump to see if there’s anything stirring up. BTW, I subscribed too!

Looks super cool so far! I dig the style. It’s refreshing after seeing so many “realistic” renders.

Hi guys,
just to let you know… this project is NOT dead

life gets in the way at times, but none of us are quitters. here are some screenies. I’m just clearing up some loose ends and finishing some layout and stuff… I also took some time off to teach Neil to do basic animation… so that he can help me. I was thinking I could do the keyframing, and let him do the ‘tweens’ or passing positions (yeah, I’ve been reading Animator’s Survival Kit lol) we’re all set to begin animation in earnest. sorry for keeping you hanging for so long 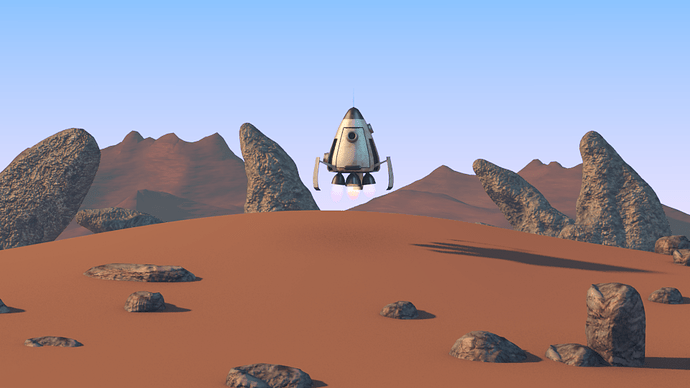 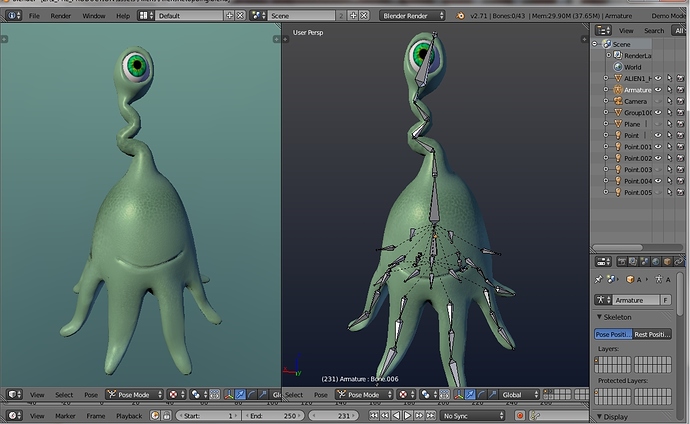 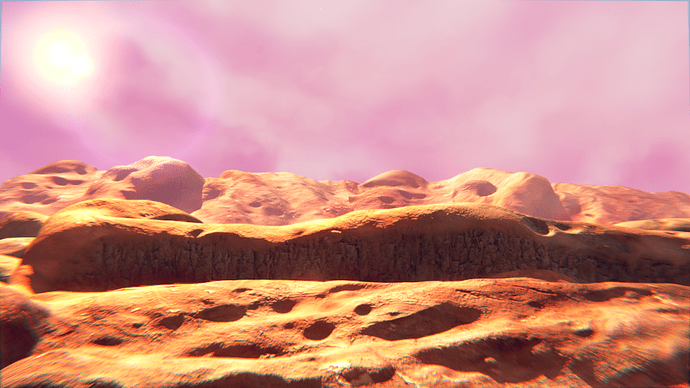