77 and still in that learning curve.

Hey, in the last several months I turned 77. So I thought I would share my little project with the community. A few of you know me as a Blender buddy who will attempt to help out when I can. But, most probably know me as an opinionated old man. I can’t really apologize for that since maybe it comes with the territory.

Anyway, well over a year ago I decided I needed my own gallery. Obviously no one was interested in showing my little efforts so screw them. And, in Blender we are all filthy rich. Hey, fourteen foot high ceilings on the first floor where we can display the large pieces. That’s no problem. Work a crew overnight replacing something on overtime what the hell it’s only 30 thousand dollars. We are attempting to draw a viewer into what is truly a fantasy world. For them and us.

I can’t post a WIP because my workflow is more like a crawl. Hell, in the last two months I moved this little project out of Yafaray into Cycles because of the baking. Bringing up yet another damn learning curve. However, I have solicited opinions from two Blender friends. (harleynut and minoribus) And, given the pace I work at that must have been excruciating for them. Thanks is all I can say.

A traditional artist friend and our Vicki from the forum here gave me permission to use their work. Then with mine and some family pictures away we went. At that point minoribus commented he was seeing a family theme. And, damn if he wasn’t right. However, when animated maybe it won’t bore the viewer to death. And, animating with a bottom feeding Nvidia card is going to be a bitch. The typical locking a camera to a curve isn’t going to cut it. People walking through a gallery change their gait and tilt their heads. My target audience is my family by the way. However, that doesn’t mean I wouldn’t like others to enjoy it. Regardless thanks to the community. When I started with the old Blender (Hung on the wall) this community was a tremendous help. 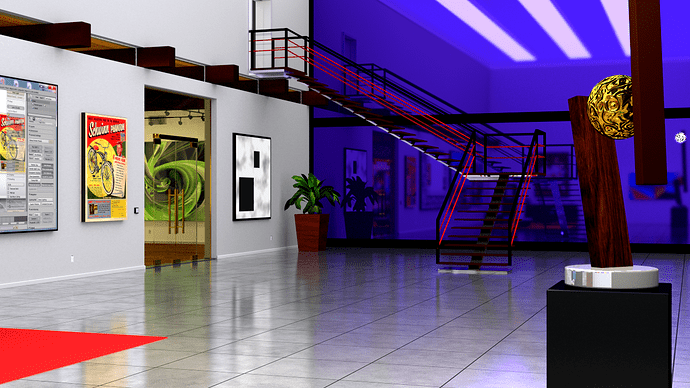 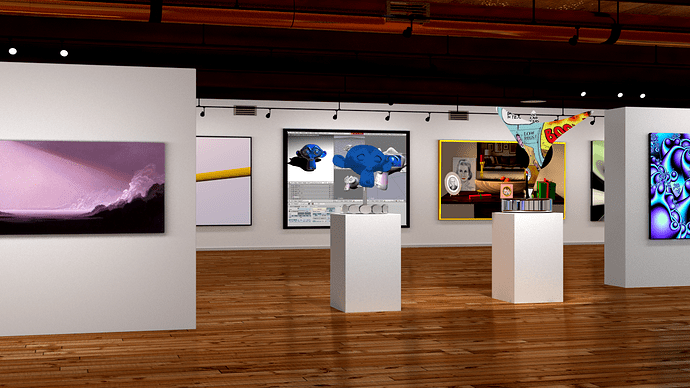 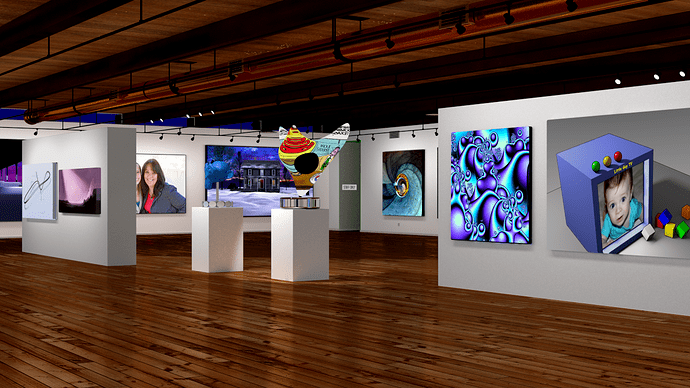 Glad to see you’re gallery is still coming along, ghost! Lots of new stuff I haven’t seen before. Very interesting!

I remember your gallery Yafaray render.

juhaW I love the look Yafaray can give you with just Direct Light, AO, and caustics if needed. And, if I had a top tier CPU would have finished this in Yafaray. But, render times just keep climbing.

Then I saw our fellow Blenderheads posting about baking in Cycles. And, I had to try that simply in an attempt to drive render times down. Which it did even with my modest Nvidia graphics card. Now Cycles is new to me so I’m still attempting to do the Nodesville thing. By the way I have Cycles set to Diffuse 1 with Reflective Caustics in some scenes.

Anyway, I’m still a Yafaray fan as I suspect you are. Also now I’m having to lose walls as the camera rotates. Which wasn’t necessary in Yafaray. Damn attempting to animate on a home computer. I wish I had stopped with stills.

Hehehe, ghost, you kill me. Just reading that intro, I hear my Father-in-law! I’ll be keeping track of this! Keep it up, it looks like all that work is paying off.

What a great idea. Looking forward to seeing more of this.

Thanks guys. James still waiting for that bad ass weapon to rattle and roll. Xraygunner I’m not even familiar with the career field but now see where Xraygunner came from. And, Ryeath working HVAC I wonder how you even have time for Blender unless working new construction. I’m going to check you all’s work out after posting this since I’ve already lost it once.

I had forgotten that I had even filled out that bio! From what I’ve seen here, I agree with the thought on time! It’s a wonder anyone can keep up these days! Hat’s off to those that can!

Cheers-
77 is a great age - I’m getting there by July 7 - Still a newbee making the transition from Cad and Cinema4D. Sit here and drool over what the youngsters are creating - keeps me aware.
Ed

Why ‘’ My Little Chickadee ‘’ ?, must be a great story behind this and I am all ears.

Nice work here, keep it up and looking forward to seeing more.

juhaW I love the look Yafaray can give you with just Direct Light, AO, and caustics if needed. And, if I had a top tier CPU would have finished this in Yafaray. But, render times just keep climbing.

Isn’t Yafaray still very much an engine dependent on rasterization at its core?

If so, then it’s natural that it will slow down as you add more and more geometry. Pure raytracers like Cycles does not have this problem, you can throw millions of polygons at it and the only thing that will noticeably increase rendertimes is if there’s now more indirect lighting or you added more complex shaders.

I’ve been going through bake hell for several days. A wall needed to be done again. Damn this! But, that might be another thread pleading for help.

Craig that is generous. I have admired your tablet work for some time now. And, at least we know she is alive.

Xraygunner, don’t even get me started on how the American worker is being exploited. While the top tier simply moves around the raises you use to get. No we are not going there.

Knotian to simply wake up is indeed a good age sometimes. I am also in awe of some of the work on this forum. With some talented folks using all aspects of Blender. And, many who take the program over the edge with something which never occurred to me. See Craig above:

And, my South African buddy speed with seventy seven 7s.

Can you imagine him today trying to run that shit by females. Hell, my two daughters would have beat him to death with a couple of high heels probably. But, god knows he came up with a couple of jewels given the time. Old Mae West came close to killing his fat ass several times even back then. History: You have to love it unfiltered.

And, finally Ace. Ace what really hooked me in Yafaray was gloss. Which by the way is still kicking my ass in Cycles. It seems any gloss is view dependent and can’t be baked. At least not by me. Which means in Cycles with this modest card I’m still cutting my losses. I would like to have a gloss on the molding for example. But, not possible given I want to animate. The final product with a GT 530 graphics card is going to be… well, be less then what I would like.

Which I find a little sad. As in given if the old masters all had a student starter kit of oils and brushes now the results would be the same. Well, I didn’t covey that thought to well but maybe you know what I mean. Or, maybe a disclaimer in the credits. Done with Blender and a Nvidia GeForce GT 530. Yeah, right. The attempt to animate is the eight hundred pound bitch in the room my Kansas Blender buddy.

Thanks to all of you for the kind comments and a few laughs. As I mentioned my workflow resembles molasses being poured. So this post will simply slip to the rear. I do have a couple of thoughts which I might occasionally post.

And, by the way speed777777. I hope to have a story at the end that is unexpected. (Well, it was) Like you just attended a gala opening for a gallery which doesn’t even exist anymore. Hence ‘TheGhostGallery’ You all take care and have a good day unless you have other plans.

Look in a mirror or a glossy surface, does the reflection change when you look from different angles or does it not?

The reason why the gloss changes is because the reflection angle from the camera changes, if the reflection itself was baked the only thing you’ll get in an animation is a bizarre ‘glued on’ effect.

Ace, I understand why gloss is view dependent. And, have no problem with that. That is not a Cycles nor Yafaray problem. But, simply light.

@povmaniaco, I couldn’t just let your comment ride. It was the luck of the draw or I have been blessed depending on your religious beliefs. Almost all of my military friends I served with and most of the young shipbuilders I started with in 1961 have been long gone. Including several who became health nuts in the 60s. Well, they still had to work in that environment. And, quite a few died from the effects of Asbestosis. Which I have. And, no one back then would have given you any odds on me reaching fifty. Suffice it to say I wasn’t a health nut. More like a run away train.

But, I choose to say blessed although no doubt genetics has played a role. And, please don’t think I’m advocating anyone living like that. I was delighted and relieved when my youngest daughter finally gave up smoking at 45. I should say I was overjoyed. Impressive I think not my blender friend. To me impressive would seem to indicate I did a damn thing to facilitate this. Here’s hoping you enjoy this fine program and turn out some art you enjoy.

Setting up your own virtual art gallery is a great idea, it render really well on those pictures.

However, I have solicited opinions from two Blender friends. (harleynut and minoribus)

After about 4 drinks tonight … Harley says…

I gotta say, I’m glad you actually posted something here on your museum project, and I hope you will post more, as you move forward.
Let me say this… I’m 53 … and my dad is about your age… and he can barely figure out how to check his email. So to be able to understand the goofy ass crap that makes Blender turn out some decent art is something you should be proud of.

Continue to post your progress as you move forward

Harley, your dad might indeed have a life. And, I applaud that. Whereas I’m in a CG program trying to do the goofy ass thing. I think your dads day tomorrow might be much more enjoyable. And, I sincerely hope it is.

But, I’m delighted you finally ran across my post old blender buddy. As I mentioned Cycles and I are not exactly friendly. And, my idea of a complicated node setup is a mix node. And, with this graphics card that could be a blessing.

That being said thanks for the comments. I’m looking forward to that Vegas thing playing out.