Here’s a picture I made because I got bored. It’s a 9mm Beretta. Tell me what you think.
Engine: Blender Onboard
Time: 21 min, 42 sec
Ray, Shadow, Gauss, Gamma Correction, OSA lvl. 11 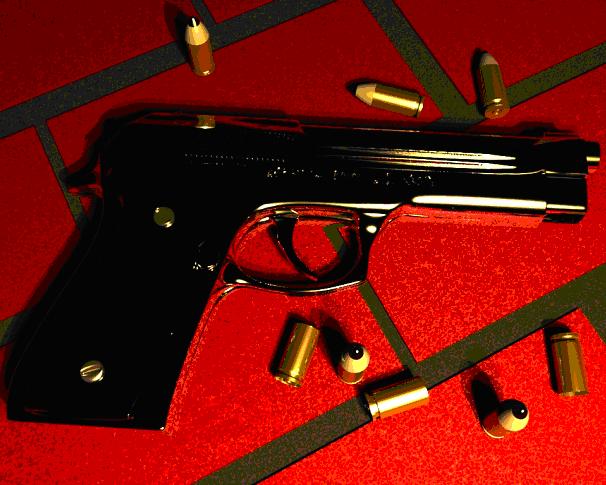 Looks good, but the lighting makes it hard to see any details. How about a clay render so we can see what the model looks like?

Dump the background and Add more light just so we can see the detail… It looks good, I want too see more of it though.

Lighting sucks. sorry i had to say that.

After increasing the brightnes in PS extremely i see the whole gun is just a black spot, with no details, so i suspect its either JPEG compresion took the details, or the model sucks.

u gotta re render

Looking good… Almost realistic, but like a lot of people mentioned, it is hard to see details of your model. Maybe you have black material too black or that the lighting isn’t bright enough for it.

Play around with that so the details of your gun would be shown better. Keep it up.

i’ll add another light opposite of the other one. I noticed that one side of the background was way darker than the other. Or, I’ll just change the area lamp that I already have and make it an onlyshadow lamp, then put a no specular hemi lamp at the top. I think I’ll change the bullets too, they look a little dull, minus the shells. Also, on the side of the gun is inscribed “9MM BERETTA U.S. ARMY” but the lighting sux so bad that I cant read it sorry 'bout dat.

Here ya go! New lighting, and larger dimensions, too. 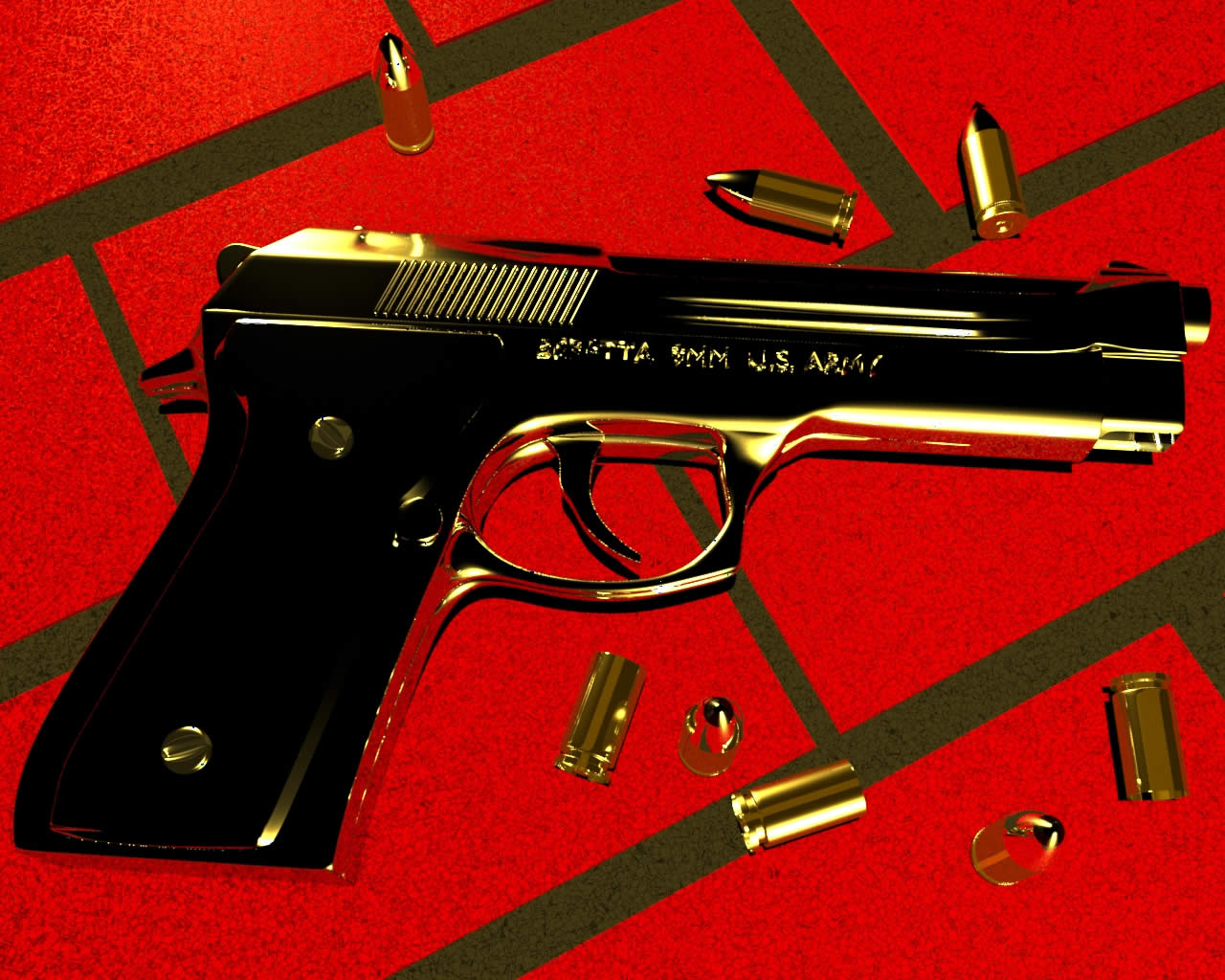 Still hard to see. About out putting something in the World so it won’t reflect only black? Angular map certainly would come in handy.

Very realistic!. look like gold or the lamp is yellow?
very good.

a little bit of both. the guns mirror color is gold, and so is the lamp.

Now that I can see it better, I can see that the shape isn’t actually very close to the real gun. The grip, area behind the trigger, and underside of the barrel are much rounder than that on the real gun. You definitely need to lower the reflectivity so we can see the mesh better, it’s reflecting way too much sky (which shouldn’t be black). You’ve also got a nastly seam along the center of the gun, especially by the trigger. The area around the hammer should be rounder and smoother too. It looks all right so far, but you can definitely do a lot of work to fix it up and improve the shape.

Here ya go! More detail, and I got rid of that seam. At first, I didn’t know what to do until I had ripped the gun in half. It was a normals miscalculation, and, since the main body of the gun was mirrored, the inside faces were all filled, and the subsurf modifier made it look like it was cracked in half. But, after playing some Counter-Strike: Source at an all night LAN party, (woot!) I saw, on the Dual Elite pistols (which are modeled after Berettas) that I had a lot of detail to add. I also got a reference picture from Encarta encyclopedia to model from. 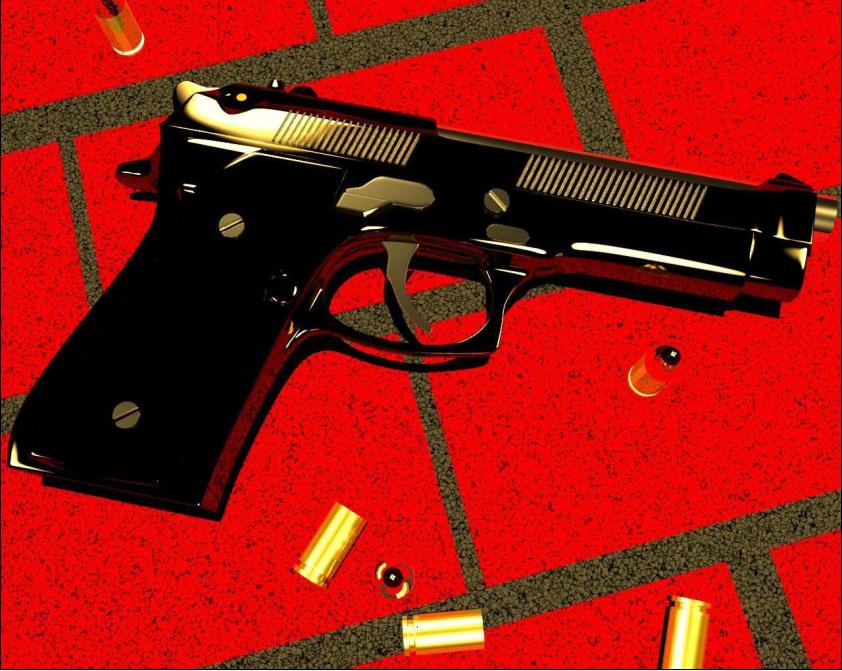 It looks a lot better. You still need to fix the scene so it’s not reflecting black, I’m sure you can see that no detail is visible in the black parts. The grip and underside of the barrel still need a lot more rounding. Compare this picture to your gun.

Here’s an even better picture. I think i’m just gonna scrap my old beretta and start from scratch again. 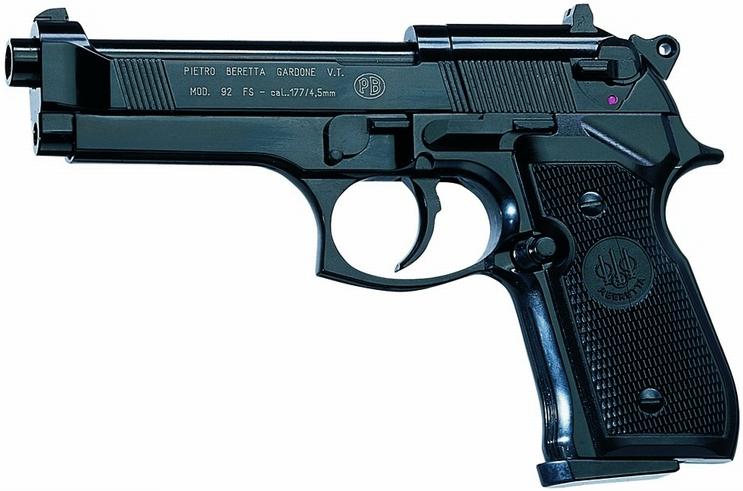 either JPEG compresion took the details, or the model sucks.

Yeah, the model did suck.
But this is the new one. I scrapped my old one, got a hi-res picture, and re did the whole thing. And I got rid of the backround with the bricks that a couple people seemed to hate, and the world material is a dark gray blending to white, so you can see the details. The grip is just two noiseless wood tex’s, going opposite directions, and on the last 3 renders, I left out the beretta logos on the grips. So this one I’m a lot more proud of. C&C please! 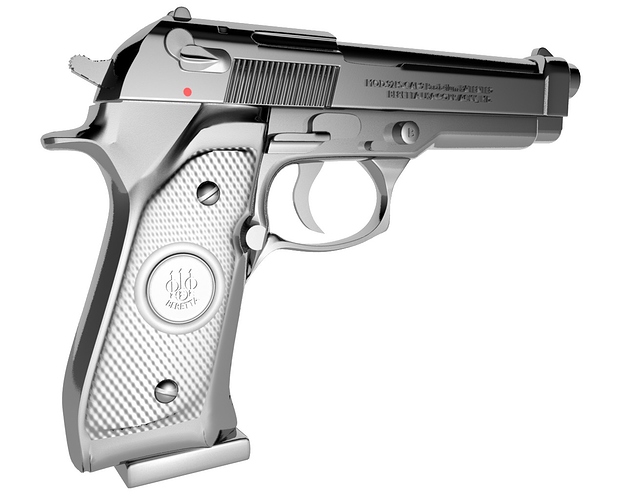 It looks a helluva lot better. Very impressive. I only see a few minor problems. There’s a seam right next to the magazine release (where the trigger guard meets the grip), the texture on the grip is very fuzzy, and you’ve got some artifacts on the edges of the hammer and towards the bottom of the grip. Also, the text on the slide sticks out slightly too much, as does the button with the B on it (I think that’s a catch for disassembly but I’m not sure). The metal material needs a little tweaking (not sure what) but it’s not bad. Still, all those are really very minor problems. Great improvement!

It was tuff figuring out how to get the trigger guard fused in with the handle of the gun.

I can’t figure out how to make the grip texture sharper. I tried the sawtooth progression of wood bands, and that just got all screwy.