A Box of Krispy Kreme Donuts

This is a project I made a while ago. I haven’t done much with it but the goal is to make people hungry - let’s see how that goes anyway.

Tell me what you think: 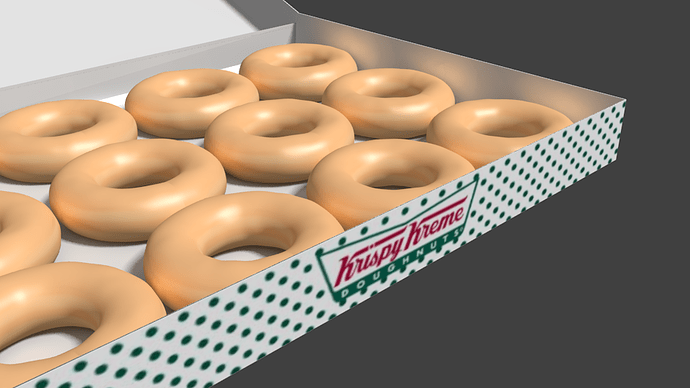 The box is good, although maybe a little too reflective on the inside. The donuts are good, but to be a little more realistic, they should be less identical, and less “perfect” (i.e. flaky, dripping frosting). Maybe turn the specularity down too, or turn down the specular hardness.

That’s a nice start on the donut material, and I think you got the dimensions right. I agree with GregHx, the donuts need more variation in the glaze. They’re also too perfectly round. But I think the spec should actually be harder; that’s the Krispyness (I’m assuming this is internal renderer). Box needs a bit of work; it needs those inside tabs at the corners where it’s fitted together, and it’s also way too straight and perfect for a flimsy cardboard box. Finally since this is a closeup of a fairly small object, some depth of field might add to the realism too.

You’re making me hungry for Krispy Kremes, we don’t have them anymore where I live

Edit: Since you have bacon in your signature, I give you the Luther Burger.

Thanks for your replies. @ GregHX, thanks for the input, I think I know of a way to add some more varied displacement. As for the flakiness, I made this to look like it was fresh off the (big thingy you sometimes see in Krispy Kreme stores) so that it would be MAYBE a potential Hot Donut advertisement. As for the shiny box, I originally did this in order to challenge Cycles’ superiority to Blender’s bounce lighting, so I emphasized that.
@CD38, I will do my best to work on the cardboard box. I will add some depth of field as well. As for the availability of donut stores, I have to say that there aren’t any Krispy Kremes around me either. I recently moved to Africa, and the donuts here aren’t quite the same, they’re more like funnel cakes (which are still good.)