ok, I’ve finally started a new wip, I don’t have much time now but here’s a progress image, just started modelling, no greeble, textures, or anything else:

I don’t really have an idea for this, except that it just kinda turned out like it is… I’ll be adding lots more detail, and practicing my texturing.

edit #2:
btw, I’m hoping to get this gallery-worthy, so far I’m happy with the lights (headlight thingy’s and the window lights are my favorite, I’ll mess with the rest…)

any improvement? please tell me what you think.

Edit: wip image removed, you can find it at:

I can’t see a crapload of it. Spotlights look nice, though.

WTH is a Greeble, also?

hey, we were all new once.

Greeble = all the semi-random details that add a sense of scale to a model esp. mechanical.

thx for the comments. I’ve had others saying it looks too much like a jeep too, I think I’ll change it somehow in the front…

I didn’t say it was a jeep, I can’t TELL what it is. The model might, in fact, look like a space-ship. You don’t really have to change the front, but if all you can see are two spotlights and something that looks like a grill, then it’ll look like a jeep. Just get some lights, is all.

Omg! Teh not searching teh webzors! Teh duh!

Edit: WIP image removed, you can find it here:

also, is this angle better? -and I think I’ll make the texture darker.

the image:
Edit: WIP progress image removed, you can find it here:

comments? thoughts? If you have any ideas for a background PLEASE tell me! I’m getting low on ideas.

edit: I think I’ll also add some small lights like in the front on the sides, what do you guys think?

what do you think? am I losing the overall feel of the pic by brightening it up?

I like the brightening, it means we can see the modelling. The ship iitself we need more detail though, I’m sure you’re planning to work on that. Good start.

He’s gonna greeble it up at a later stage.

update: started greeble/ more lighting fixes:
two material tests, which do you like better?
also, I changed the front a little… is it better?

and the other material for tubes:

and a concept for greeble,
the blue = more pipes
tan-greeny color = extruded panels with stuff on top
dark red = recessed panels with lots of tiny greebles.

I like the concept for the greeble. overall, it needs work. but that’s kinda what it’s getting.

just to give you an idea, here’s what I’m working on (attached) 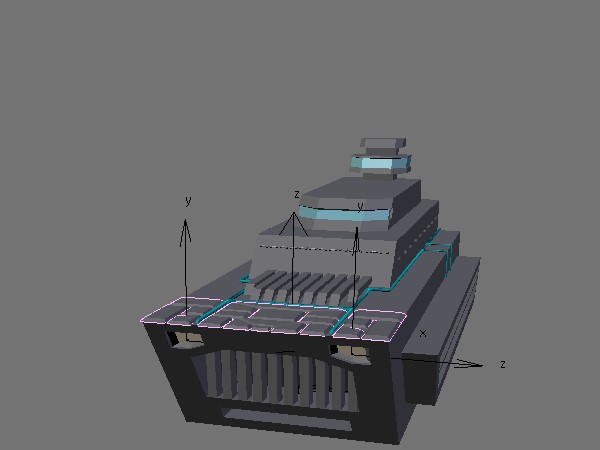