Hi all. Now, I’m taking a break from texturing a starship for little project… Anyways, to the piont - here’s the first render with proxy elements - only barrel is ALMOST finished (minus flash hider) Cycles + BMesh ftw. 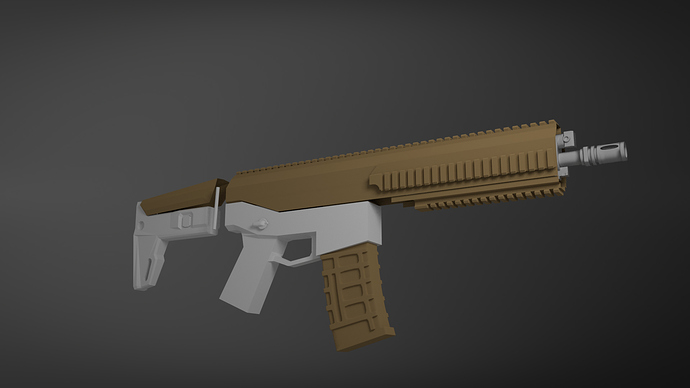 Nice, The folding handle metal part was the hardest part for me.
Look good to me, may we see some wires ?

Hm, I’m afraid, that with BMesh getting a wire is no longer helpfull, at early stages ofc (Before quad’s and tris only)
But here, please 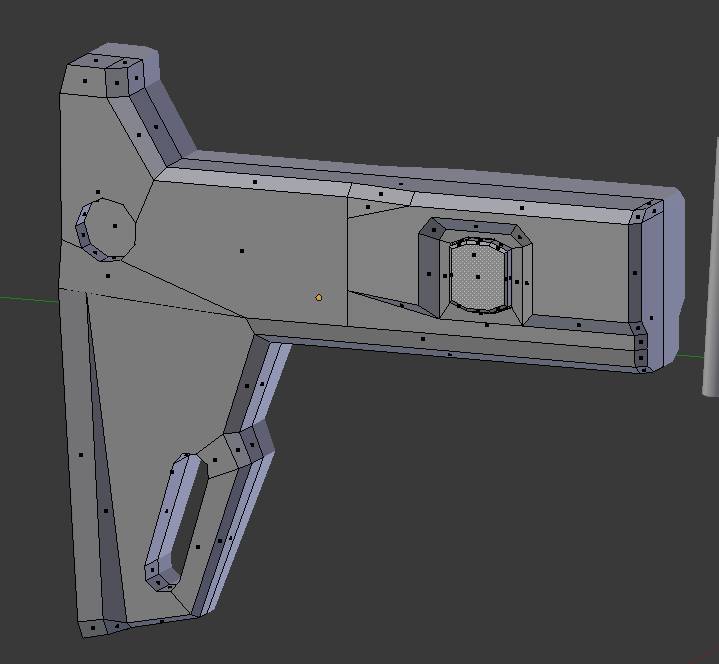 dang, I need to try out bmesh…

Well. After two formats, burned PC and other minor obstacles, I’ve dug up file with ACR. Much to my surprise, I’ve found only old version (even before graphic posted here)

So, my results after 4h of modelling (With breaks for chatting… DAMN FACEBOOK!)
As I have to block out again, most x-scale is little off. But I’ve managed to get some close-ups, so it should look pretty well. Muzzle flash is a pain, do somebody know how to create nice cutouts in a barrel, let me know, although I need to check new bevel… Still afraid of previous bevel messy outputs

BMesh, with bevel and vertex slide is, well… … … Powerful… Tool. 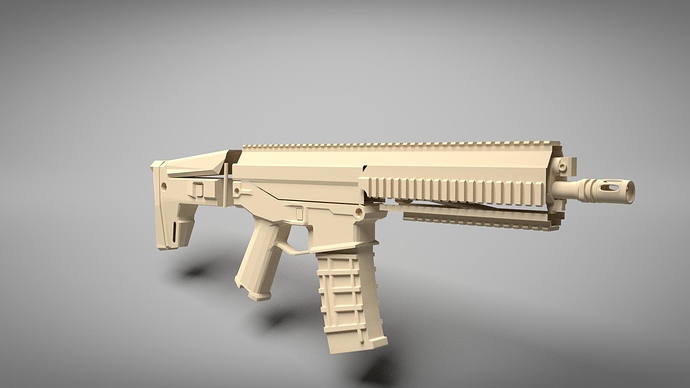 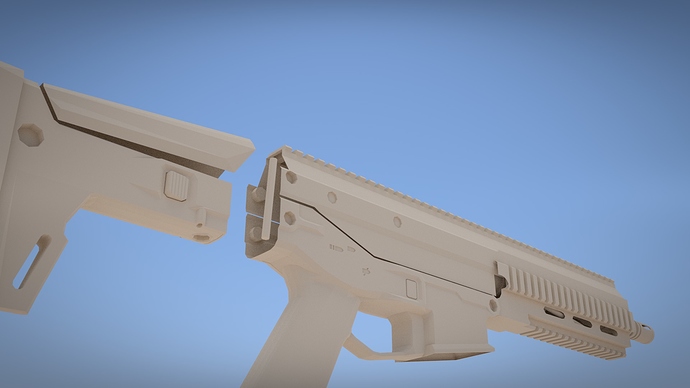 Now trying to get it right; More details, more x-scalling (Working with sides only is bit annoying), rough EOTech at top rail made in 5 minutes, because top of the rail was bit… Clean

As this is my first project when I can fully use subsurf… I’ve found, that with hard surface modelling, SSurf is not working with complex shapes. It’s easier, cleaner and more efficient to bevel by hand. Creasing is not yielding desirable results. Any other ideas, how to keep mesh clean and keep it mid-poly/sub surf ready? 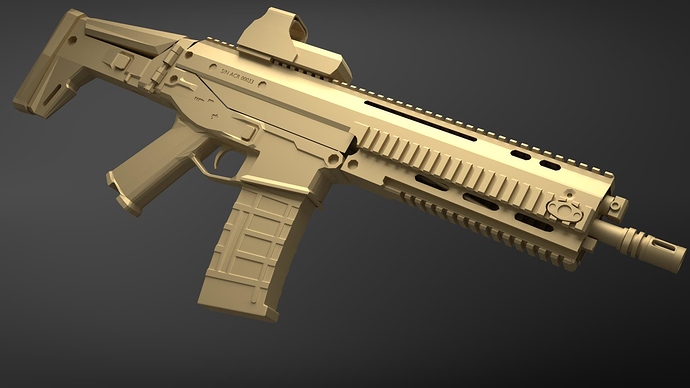 Minor work on buttstock, more embossing, another x-scaling. Buttstock rail has x way off, but I notice that after render. More holes drilled… Generally, I think that modelling itself should finish in 8 workhours, plus 2 more for quad/tri topology.

And then, my nemesis. Texturing. YOu know, I’ve never been really satisfied with textures, and never really finished any. Maybe this time?

So, blenderheads, point mistakes, yell at me, and do whatever You do best 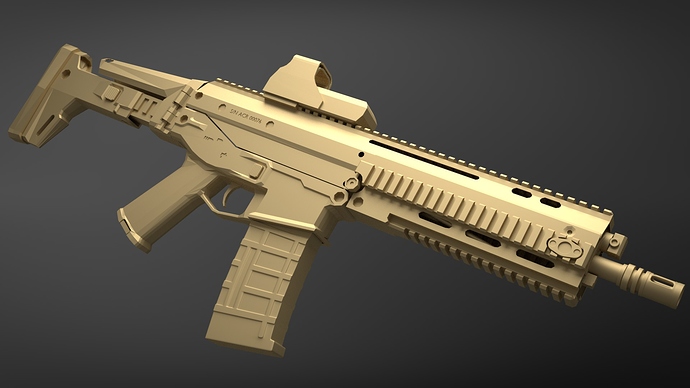 wow, these are really good renders. You should possibly do a tutorial for these sometime (if you can/want to) as i know that i for one would love to go through and make something this good

As an experiment, I shall today work for an hour live.

No microphone, and I like to listen to music… So sorry about that

@Penguinmagnet - It’s easy ;p I’ll post blend… And if something is not quite understandable, I’ll explain more

Edit:
Added render & blend
And… I think, this broadcast is a failure ;p As I’m watching it now, only last 20 minutes are relevant. Guess… This shows, how far off my workflow is from being good.

Btw, I’ve left it online, so if anyone is interested (For example, in listening Hitman music xD)… 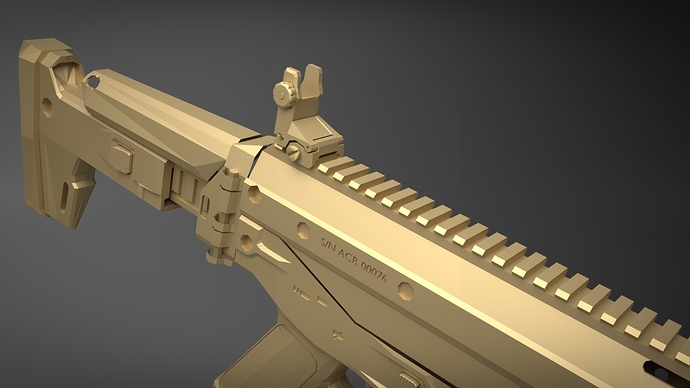 Ok, so I think, I’ll repeat same stunt today. Probably will start around 2300 GMT+1, will work for about an hour at least.

I’m now asking for C&C - do You think livestreaming is an interesting idea? Or is it completely useless? And still, feedback for ACR most welcome 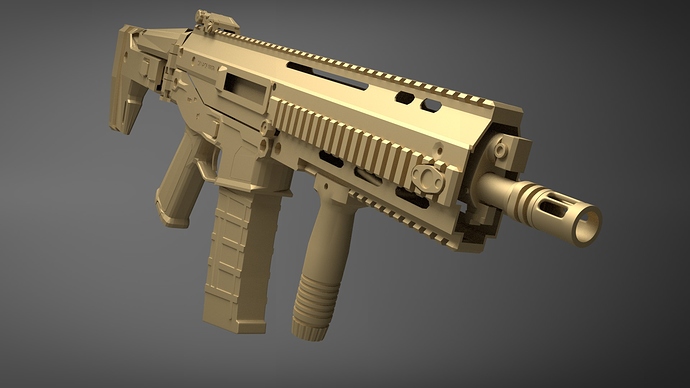